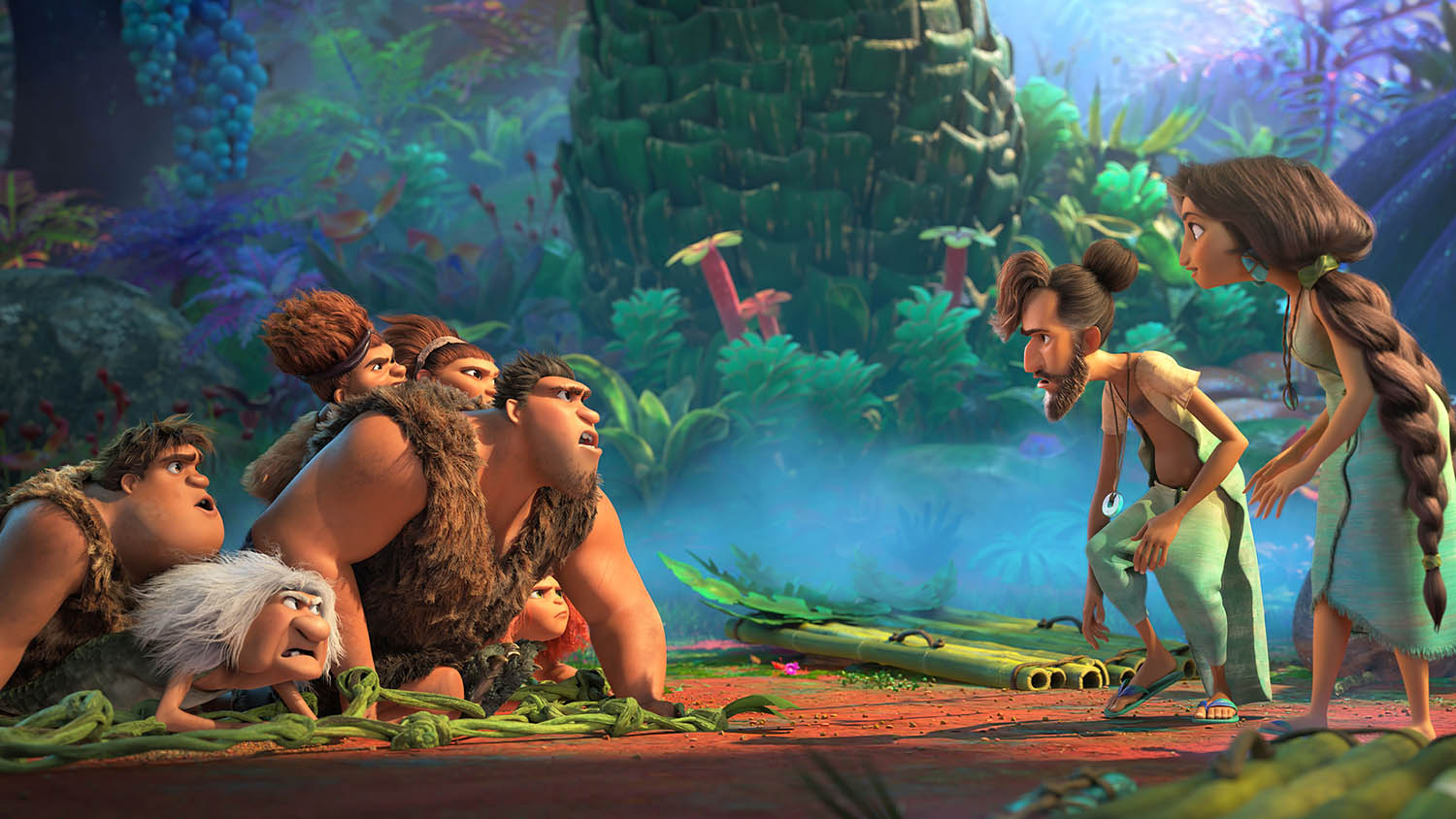 Brightly colored, inventively designed, and constantly flirting with the outright psychedelic, The Croods: A New Age resembles what it might be like for a three-year-old to take an acid trip. Whereas its relatively subdued predecessor, directed by Chris Sanders and Kirk DeMicco, was grounded in some semblance of the real world, the sequel follows the path of another DreamWorks Animation series, Trolls, by packing as much manic energy and candy-coated visual excess into its runtime as it possibly can. The approach mostly improves on the limp family-comedy of the original, trading tired jokes about overprotective fathers for sprawling action sequences and a bevy of oddball creatures including wolf-spider hybrids, kung fu-fighting monkeys, and a King Kong-sized baboon with porcupine spikes.

Which isn’t to say that A New Age turns its back on the Crood family. In fact, it juggles a half-dozen or so emotional arcs pertaining to their daily lives, with the relationship between the feisty Eep (Emma Stone) and her conservative father, Grug (Nicolas Cage), once more at the heart of the narrative. As the film opens, the Croods, who’ve accepted Eep’s boyfriend, Guy (Ryan Reynolds), into the family fold, are desperately searching for food and safety when they happen upon an Edenic walled paradise owned by the technologically advanced Phil and Hope Betterman (Peter Dinklage and Leslie Mann), who chafe at the boorish antics of the backwards Croods. Discovering that they knew Guy when he was a boy, the Bettermans contrive to kick the coarse cavemen off their property while stealing Guy away from Eep to live with them and create a family with their cheery daughter, Dawn (Kelly Marie Tran).

Though ostensibly existing in the prehistoric world, the Bettermans, with their turquoise jewelry and rope sandals, epitomize a certain kind of well-heeled contemporary liberalism, where a rehearsed casual demeanor masks a fundamental narrow-mindedness and even intolerance of the uncouthness of their perceived inferiors. They’re the kind of people who won’t let a struggling family stay for long on their unused property but will send them off with a passive-aggressive smile and gift basket full of fancy soaps. The Bettermans are surprisingly complex, thanks in large part to Dinklage and Mann’s nuanced voice acting. In particular, Dinklage finds droll humor in a man whose conceitedness belies an essentially good heart.

This sort of gentle satire on class divisions isn’t the most natural fit with the film’s sweeping prehistoric milieu, but the screenplay manages to strike a relatively deft balance between its character moments and the comedy-adventure set pieces that are the film’s real raison d’être. A New Age doles out its emotional beats with a refreshingly light touch, never allowing sentimentalism to overpower its buoyant sense of adventure. But aside from some delightfully crusty line readings by Cloris Leachman as Gran, the film is rarely laugh-out-loud funny. Indeed, the film is so packed full of incident that it rarely gives its jokes the space to land.

Similarly, its overall sense of spectacle is stronger than any particular image or scene. We’re never wanting for things to look at in the film—there’s nearly always some wacky creature or impossible Roger Dean-style landscape or virtuosic bit of animation onscreen—but we rarely get much chance to take any of them in before the film has moved on to the next thing. There’s plenty to look at in A New Age, but not a whole lot to truly savor.

Review: Before Turning Histrionic, Uncle Frank Is a Tender Look at Outsider Kinship