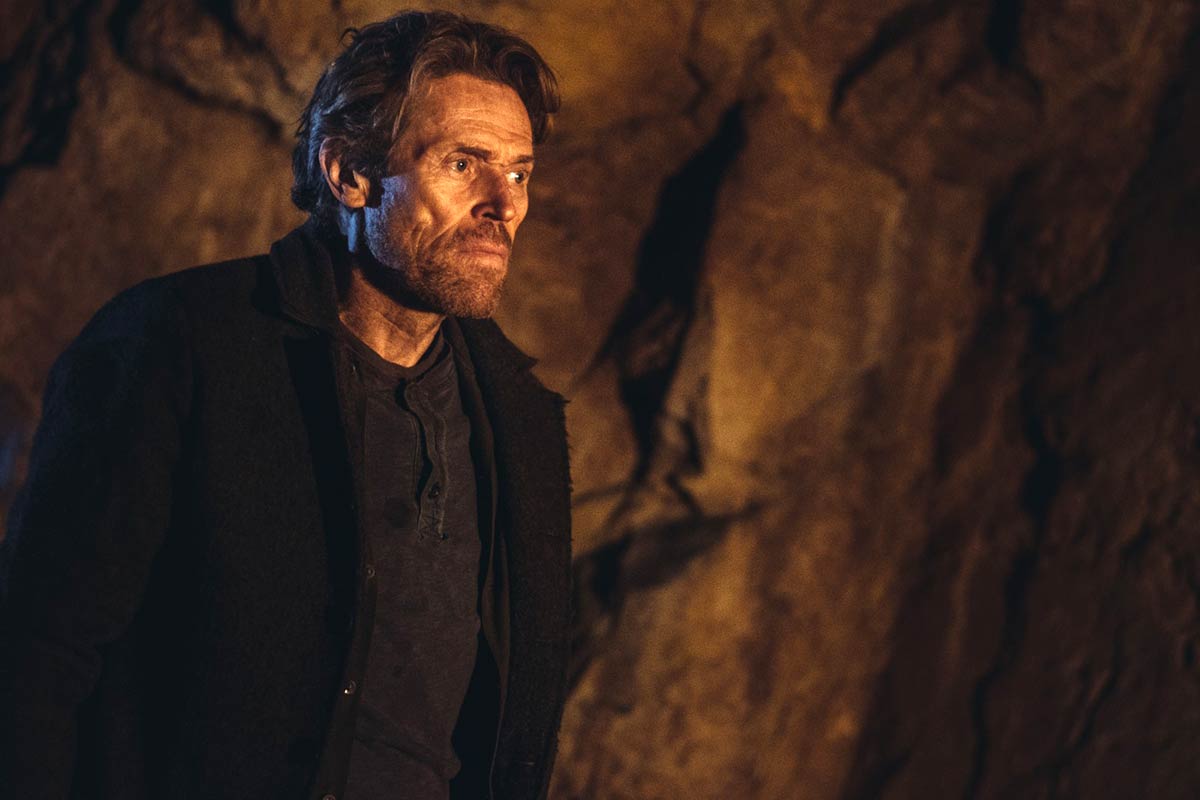 On one hand, Siberia is a traditional Abel Ferrara story of an aging, existentially tortured artist who grapples with the decisions he’s made, a character who almost certainly serves as an avatar of the director, played by regular Ferrara leading man Willem Dafoe. On the other, Siberia is an experiment in dream logic, with little connective tissue between scenes and occasionally unhinged imagery and symbols that recall the work of David Lynch. When it’s operating in the first mode, the film is often quite evocative and affecting, but the second mode succumbs to fortune-cookie platitudes and obliqueness.

Clint (Dafoe) is that Ferrara specialty: an implicitly macho creative, a man who makes sensitivity look badass without making a show of it. Dafoe, seemingly incapable of hitting dull or false notes, is a master of embodying this self-mythologizing Ferrara type. Like many the actor’s characters, in and outside of the Ferrara cinema-scape, Clint is most compelling in repose. Living out in the Siberian wilderness where he operates a bar, clearly to escape barely submerged regrets, Clint’s every gesture is tinged by Dafoe with understated gravity and sadness. When Clint pores rum for an Inuit man, each person speaking to the other in their respective language—which isn’t subtitled, so that we may feel the gulf in their communication, as well as the unity that’s achieved anyway—Dafoe allows the movement of Clint’s hands to convey weariness, as well as comfort in doing what he’s come to this land to do. Dafoe’s tactility as an actor, his unusual beauty, with features that seem both angular and soft at once, and his grounded cadences inform even Ferrara’s craziest ideas with weight.

Ferrara is also a tactile artist. He films the snowy Siberian vistas as well as Clint’s huskies with an attentiveness that often approaches rapture. The expressions on the huskies’ faces suggest the feral knowledge of animals, as well as an affection that dogs have for their human masters. As Clint navigates a slipstream of memory, traveling the Siberian wild as well as a desert, a Russian concentration camp, and a cave that might be purgatory, the huskies are seen in recurrence, suggesting the companionship that’s right under Clint’s nose, which he both appreciates and takes for granted. Certain moments in the film are astonishing, such as when a young Inuit woman bares her breasts and pregnant belly to Clint, inspiring him to bow down and touch her with religious awe. (Ferrara is one of the great American directors of sexual scenes, a master at communicating the electricity of touch.) We assume Clint is the father of the child, but Ferrara leaves that possibility open as a mystery.

The empty bar, the huskies, the Inuit people, Dafoe, the severe landscape—these are sturdy ingredients for one of Ferrara’s intuitive, austere character studies. Crowding these elements are mythopoetic clichés and fashionably meaningless dialogue. Among his travels, Clint encounters a magician (Simon McBurney) who lectures him on being beholden to reason. More rewardingly debating his father and brother (both also played by Dafoe), Clint is told that he should seek to find his soul outside of himself. At one point, someone says, “Don’t tell me who I am, when you are struggling to know who you are.” There are also demons and jilted wives and Nietzsche is also inevitably quoted, as this is very much a film about the abyss. Such effortful dialogue and sequences needlessly affirm what Dafoe’s being and Ferrara’s visual tempo already express so intrinsically: the glamour of a certain kind of pulpy masculine lost-ness. Striving for surrealism, Ferrara gets preachy, and even indulges in “dream” stereotypes such as the menacing little person who might portend higher learning or doom. Or both.

Even at its hoariest, Siberia gets under your skin. Clint’s guilt, especially his feeling that he never proper loved his father, is communicated by Dafoe and Ferrara with a kind of lived-in misery that’s often quite moving. The film opens with a monologue, as Clint remembers fishing trips with his father up in Canada, which is later complemented by a weird and unforgettably poignant moment when Clint’s father surfaces to explain to his son all the paraphernalia they will take on their next trip: tackle, poles, bologna sandwiches, chips, chocolate chip cookies, and so on. Those are the sort of details that we latch upon when trying to conjure loved ones of our past, especially those we suspected that we failed, and Dafoe delivers this dialogue with an eagerness that affirms the man’s need to connect as well as Clint’s need to feel said need. Ferrara doesn’t require traditional dream logic, as his grasp of the nitty-gritty quotidian of longing is inherently uncanny.

Review: The Roads Not Taken Leads Only to a Void of Imagination

Review: Saudi Runaway Is a Raw and Immediate Chronicle of an Escape