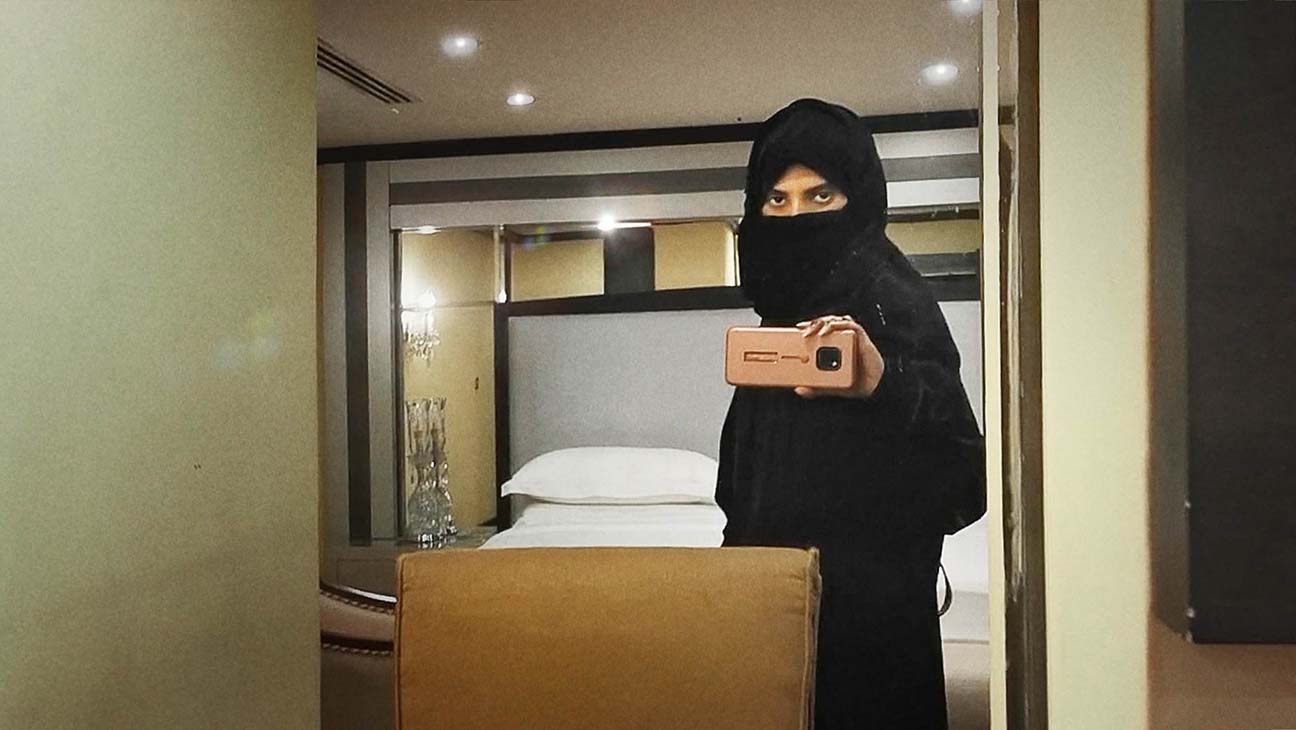 Susanne Regina Meures’s invitation into the filmic world of her exquisite Saudi Runaway is by way of a camera that moves as if attached to a body. It’s a mobility completely devoid of the vulgar familiarity of a GoPro, or the numb slickness of a dolly shot that only simulates the point of view of a character. We don’t yet know where the body is headed but we can feel its fear. Camera, character, and cameraperson are one here, and the effect is suffocating. We see people’s heads bare and covered. Our vision is fuzzy. Soon, though, the wind lifts what turns out to be a piece of a garment—the camera’s sartorial filter. We’re moving inside an abaya. That’s where we remain for most of the film: between the body of a young woman, Muna, plotting her escape from Saudia Arabia and the dark fabric of her garb.

The film’s handheld camera suggests a baby being held. Not just because of how tethered it often is to the cameraperson, but because our mostly hazy gaze suggests eyes just getting used to a terrifying world. By the time Muna tells us that she will try to record “everything” and that “it will be dangerous,” she’s stating the obvious. Though it pulsates with raw intimacy, Saudi Runaway does have its share of obvious elements, from the sound of music when we least need it, to one too many shots of a trapped bird, to Muna telling us, midway through the film, that “the majority of society is conservative.” But its conceptual device is so uncanny, so un-mediated by how Meures structures Muna’s original footage, that we can’t help but excuse the director’s attempts to turn the original fragments into a coherent narrative.

The camera in Saudi Runaway is so prosthetic, and its images all but birthed by Muna, that, at first, it’s difficult to accept that someone other than she is credited with directing the film. Must Westerners save brown women so that they can speak? However, Muna’s occasional prefacing of her murmured voiceover account with “Dear Sue” gives us a hint of a transnational sisterly collaboration. The epistolary layer of Saudi Runaway isn’t fully explained, a technique often used in the essay film genre that helps give a video-diary aesthetic a sense of depth while maintaining its mystery. Is Sue the director or an imaginary friend? Is Sue a rhetorical device like one of Chris Marker addressees in Sans Soleil? Is Sue actually listening?

The fact that this writer sat immediately in front of both Muna and Meures at the film’s Kino International screening at this year’s Berlinale made the experience of watching it all the more eerie. Our real-life escapee was clearly now safe and sound in Germany, reacting in real time—with self-conscious sighs and sad moans—to the presentation of her ordeal.

On screen, we learn that Muna isn’t allowed to leave her family home without being escorted by a male relative. That she will only be allowed to drive if her future husband allows her to. That her father keeps possession of her passport, which she can only renew with his approval. “Be obedient and everything will be fine” is the advice that Muna’s grandmother gives her.

All of the film’s faces, apart from Muna’s, are perpetually pixilated, reminding us that these are images captured without her family members’ consent. That betrayal and guilt might be prerequisites for deliverance. The pixilating effect also means Muna “covers” everyone else’s faces while liberating her own, her flight necessitating an exhilarating mix of precision, and risk, and anxiety. But, also, the anger of those she must dupe in order to leave them behind. “Do you really think you can go to paradise and leave me here in hell?” is Muna’s mother’s reaction to her daughter’s courage. Although with the benefit of hindsight, she eventually anoints Muna’s newfound independence with a WhatsApp voice message praising her. As if freedom were contagious, experienceable by proxy, or the sheer power of imagination.

Review: Swallow Is a Provocative Me Too Parable in Body-Horror Guise