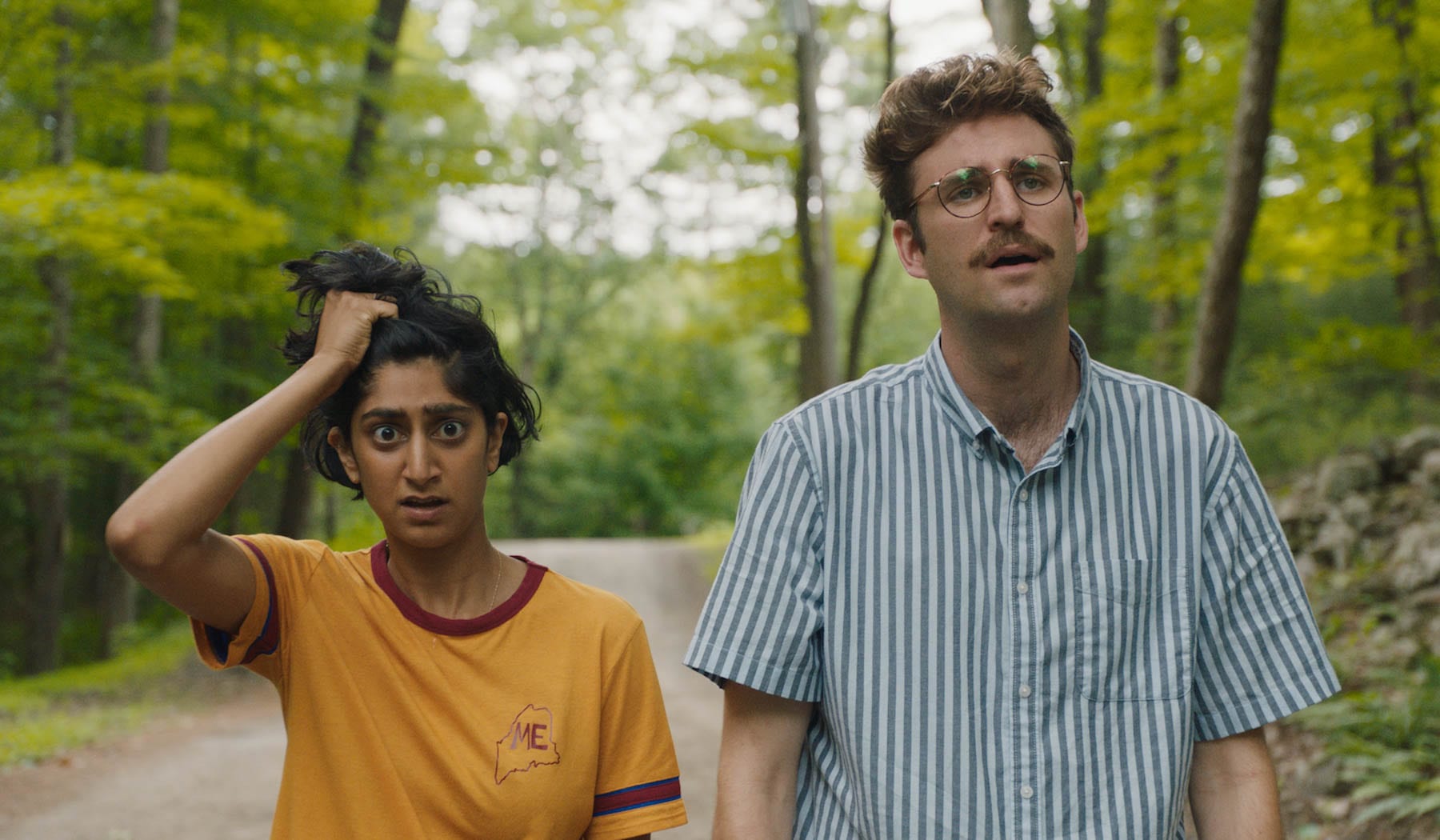 Alex Huston Fischer and Eleanor Wilson’s Save Yourselves! is the latest in a recent trend of millennial-themed works of science fiction and fantasy to fast-forward past the dystopian phase of our collapsing world in order to land on its complete annihilation. The film introduces its main characters, stereotypical Brooklynite couple Su (Sunita Mani) and Jack (John Reynolds), chafing from the pressures of constant work and the dull routine of their lives. Feeling that their jobs and relationship have grown stale, they elect to take a week-long trip to a friend’s cabin upstate where they will completely unplug from the outside world. But no sooner do they head out than the camera tilts up to the sky to reveal a white plume resembling a plane contrail splitting into tendrils of light that arc toward the ground. The road is now paved for many a gag at the expense of Su and Jack’s last-to-the-party obliviousness.

Most of the film’s most cutting jokes are offered up before the cataclysmic impact of that strange occurrence becomes known to Su and Jack. While preparing for their trip, Su emails her boss to request a vacation and notes that she will not be reachable by phone or email, which prompts an immediate response telling her that she’s fired, a brutal gag on the scarcity of true vacations without work in present-day American life. And that’s a grind that Su and Jack, like so many of us, are only too content to submit to, as they’re constantly trying to sell themselves on their promise to disconnect, even admitting on their first night as they gawk at the natural beauty of the starlit sky how badly they miss surfing their phones.

More lacerating are the ways that their sheltered lives clash with the necessities of cabin living. This is especially true of Jack, whose emasculation is served up for our delight across scenes where he struggles to be self-reliant. When Su proposes that they tell each other secrets, Jack, with his carefully coiffed appearance and neurotic attentiveness, admits, “I don’t know how to be a man.” He wishes he could be the kind of stereotypically masculine man that his father represents, and his own status as a more enlightened man who respects women and his own feelings is a consciously maintained identity that he often resents.

Yet these sporadic moments of insight into millennial posturing and technological reliance are less of a thematic bedrock on which Save Yourselves! is founded than they are peripheral to the story, which starts to roll out in simplified fashion once Su and Jack learn of the alien invasion that’s been ravaging the planet ever since they unplugged. As for the aliens, they’re merely large balls of fur with no discernible faces or limbs (shades of the beach ball-like alien from John Carpenter’s Dark Star), which inevitably results in redundant moments revolving around Su and Jack first noticing what they assume to be a pouffe that keeps materializing around the house, and later a number of images of the seemingly harmless creatures abruptly snaking out an appendage that punches through the bodies of unlucky humans.

Fischer and Wilson attempt to juxtapose the twee tropes of a certain strain of indie comedy—brightly lit and colored images, ever-frazzled protagonists, a generally deadpan tone—with the epic horror of a global-invasion film, something that isn’t unprecedented (see Nacho Vigalondo’s Colossal) but here lacks a clear through line. Rather than use its emotionally detached tone as an ironic counterpoint to the terror wreaked by hostile extraterrestrials, the film simply reconfigures the aliens into its mannered atmosphere. As a result, the carnage on that we occasionally glimpse on the screen is neither scary nor darkly amusing.

Soon, all of those jokes about Su and Jack’s difficulties at roughing it start to feel less effective once they launch into survival mode. Jack’s squeamishness about using guns provides a few laughs as he frantically rattles off rehearsed statistics about the danger of firearms, but the extended bits about the couple’s inability to drive stick shift further pulls focus away from the film’s dominant theme of millennial softness. Su and Jack’s previously aired generational anxiety only pays off when they’re saddled with an unexpected companion, but a throwaway joke here and there is about the extent to which the film delves into its characters’ minds.

Crucially, the film fails to use its millennial characters to investigate contemporary attitudes about the possibility of world annihilation. Any news story these days about an asteroid or meteor passing within any noteworthy distance of Earth is greeted with almost-wistful fantasizing about an obliterating collision, and for all of the sarcasm of such reactions, there’s a pronounced death drive among those facing the increasing probability of a slower and more painful extinction that’s been addressed, albeit with more dour severity, in films such as Melancholia. There’s plenty of room for a movie to address such fatalistic ideas with equally bleak humor, but Save Yourselves! lacks the causticness to deliver on that front.

Review: Dick Johnson Is Dead Is a Touching Elegy to the (Pretend) Loss of a Parent