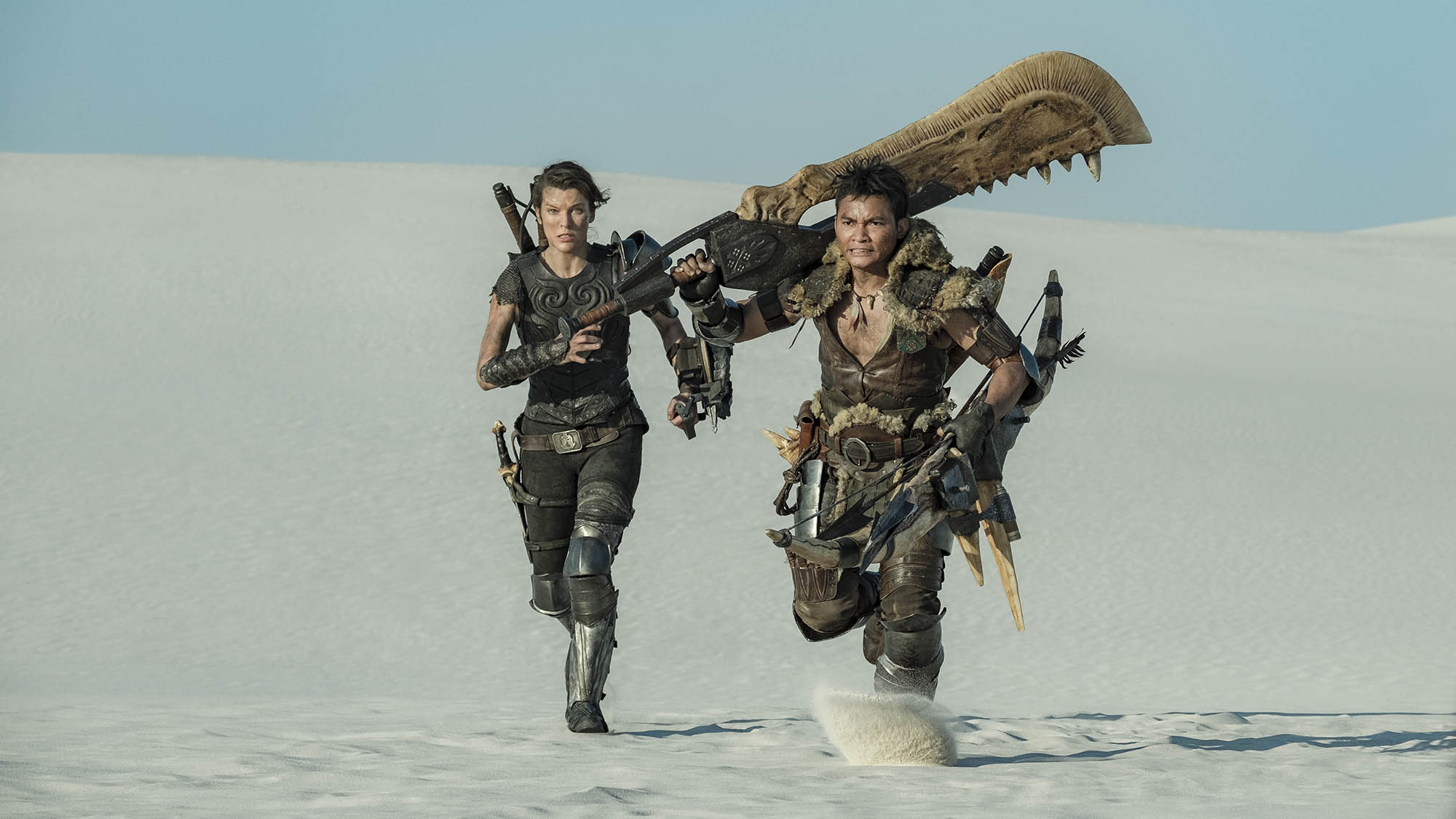 With Monster Hunter, it feels more like Paul W.S. Anderson and Milla Jovovich have hit the reset button than they’ve booted up anything new. The pair squeezed a remarkable six films out of the Resident Evil franchise between 2002 and 2016, and in this adaptation of another Capcom video game property Jovovich plays a similarly terse, minimally characterized heroine who takes on an apocalypse—resulting from the threat of extradimensional monsters rather than the undead. Whatever differences are introduced along with these new beastly antagonists are tempered by the familiarity of Anderson’s splash-panel aesthetics and arbitrary quotations of sequences from other action films.

Of course, it’s not as if Monster Hunter has ambitions of being anything beyond a B-grade, special-effects-driven spectacle. In fact, one of the more admirable qualities of Anderson’s films is their dismissal of traditional notions of quality. With Monster Hunter, he’s produced a film in which the most significant character development that the main character undergoes is when she switches out her Army fatigues for some gnarly steel armor before the climax of the second act—and in which her only arc to speak of is the one that her body forms in the air as she’s launched toward or away from the film’s giant CGI grotesqueries.

Sequences lifted wholesale from other action franchises serve as milestones in Monster Hunter’s plot, which is both egregiously straightforward and somehow only semi-coherent. Jovovich plays the pointedly named Captain Artemis, leader of a squadron of Army Rangers whose vehicles are caught in a sandstorm straight out of Mad Max: Fury Road. The storm transports them to an equally sandy landscape in another dimension, where bug monsters reminiscent of the aliens from Starship Troopers dispatch the members of her squad by laying eggs in their torsos in a slimy underground lair redolent of many a scene from the Alien series.

Making it out of the arachnoid den alive but pierced by a bug pincer, Artemis self-cauterizes herself by pouring gunpowder into her open wound and igniting it—a bit of field medicine that can’t be described as improvised, because surely she got the idea from John Rambo’s identical action in Rambo III. Stranded on the rock formation where the bug monsters live, while an enormous Black Diablos—essentially a supercharged version of the sandworm from David Lynch’s Dune—burrows beneath the nearby desert sand, Artemis reluctantly forms an alliance with a nameless Hunter (Tony Jaa). Also stuck on the island of rocks, the man has the advantage of being from the same universe as the monsters, which means he speaks an obscure language dresses like a refugee from a Pirates of the Caribbean production. Anderson’s decision to make Artemis and her Army grunts our focal points here feels unnecessary, as the film might well have worked as mildly enjoyable fantasy escapism if we were simply dropped in among the Hunter’s band of sand pirates and the monsters they hunt.

Although their first meeting results in a quite repetitive couplet of hand-to-hand combat scenes, each of which is shattered into a not entirely incoherent rapid-fire sequence of matches on action, Artemis and the Hunter find shared ground in those most basic of human drives: survival, and killing big animals with pointy objects. Eventually, they track down the Hunter’s gang of friends, who are headed by the Admiral, a steampunk swashbuckler (Ron Perlman) who hands them a new objective—one that he defines so vaguely that it gives the impression that he’s plucked it, on the spot, out of some compendium of fantasy MacGuffins. This, of course, will lead to the biggest battle of all, set on Artemis’s normal-world turf so that Monster Hunter delivers some sense of coming full circle. It’s a fight that leads to the film’s most surprising citation, as Artemis gets a chance to slide herself down a dragon’s wing by dragging a knife through it, like Douglas Fairbanks ripping through a sail in The Black Pirate.

Tasked with translating a property without much of a narrative thrust into a narrative film, Anderson has simply combined the established iconography of the popular Capcom game franchise with prefab movie moments. Rather than shoehorning in some sappy characterization—giving Artemis, our point of identification as the new initiate to the world of monster hunting, some kind of personal connection or history to work through—he preserves the way the game world defines character through tools and accoutrement. There’s a distinct sense that Artemis is her flaming double blades, that the Hunter is his bow and shark-tooth sword, and that the Admiral is his obviously pasted-on orange-blond mutton chops.

Anderson remains one of our foremost purveyors of cheap, juvenile action. He prefers sudden events over developing situations and tries desperately with every off-center framing and snap zoom to make sure our attention doesn’t drift away from a story that offers its audience neither a compellingly realized fantasy world nor any emotional stakes. With its lacking sense of suspense, undermotivated dynamic compositions, bland narrational voice, and cartoon monsters, Monster Hunter is a purely graphic experience, like a ‘90s Image comic.

But a comic doesn’t take 99 minutes to read, and over the course of its running time, Monster Hunter proves unable to sustain the fun of its total disregard for purported mainstream values like originality, character development, and verisimilitude. It’s missing, like much of Anderson’s work, any true B-movie spark. His worst mistake is leaving a venerated character actor like Perlman off the screen for much too long, as the nondescript cast of characters headed by Jovovich fail to bring much of an identity to the film. Still, this glutted, ultimately bland spectacle is hardly worse than those put out by Marvel and DC. It lacks their budgets, yes, but it also strips away the pretensions to respectability of such cash-grab productions.