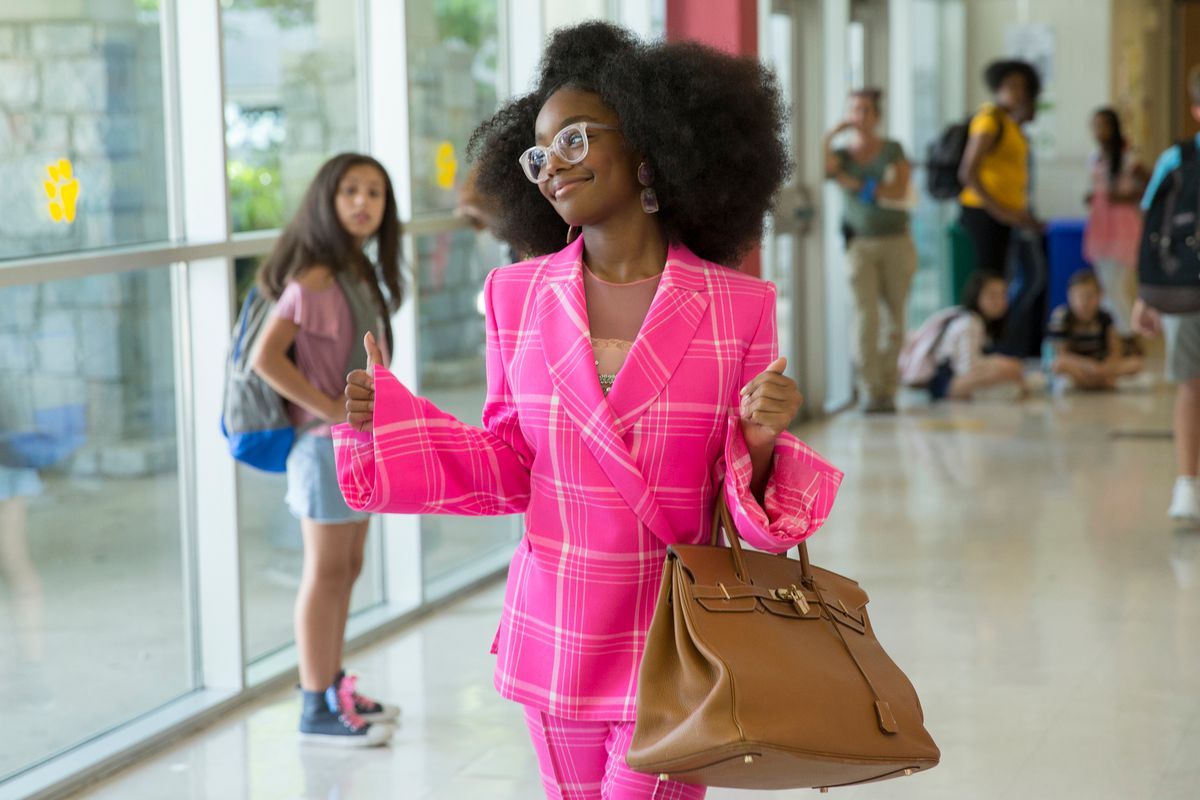 The strengths and pleasures of Tina Gordon Chism’s Little lie neither in its ramshackle, uneven script nor in its familiar high-concept conceit, in which a successful, cold-blooded CEO suddenly awakens to find herself in the body of her formerly insecure, bullied 13-year-old self. No, the film’s most amusing and delightful moments are in the interplay between the central characters as they adjust to an abruptly shifting reality.

As the tightly wound tech mogul Jordan Sanders, Regina Hall isn’t given much room to show off her talents, as Jordan simply exists to either berate her assistant, April (Issa Rae), ruthlessly shoot down all of her employees’ ideas, or repeatedly boot her pesky boy toy (Luke James) out of her penthouse after she’s had her fun with him. Hall does what she can to inject brief glimpses of vulnerability into her one-note, self-aggrandizing bully, but it’s only after a bit of well-timed transformative magic cuts Jordan down to size and the magnetic Marsai Martin steps on screen that Little begins, at least for a time, to find its footing.

Right out the gate, Martin convincingly captures the fortysomething Jordan’s swagger and arrogance. And the young actress’s performance is never more persuasive than in the early scenes when Jordan must capitulate to April, leaning entirely on her kowtowed subordinate as they struggle to find a way to reverse Jordan’s de-aging just as her biggest client, the obnoxiously entitled Connor (Mikey Day), threatens to leave for another firm.

Martin and Rae’s comedic repartee bolsters the film’s attempts at balancing the hotheaded young Jordan navigating the new limitations of her situation with the blossoming of the shy yet ambitious April as she confronts the sudden shift in power dynamics between her and her domineering boss. Regrettably, though, the potential for a tighter, more focused two-hander between Martin and Rae is lost once little Jordan is forced to go back to her old school and face similar bullies as she did when she was 13, and to quite predictable results.

It’s here that Little pivots away from the intriguingly thorny, precarious dynamic established between April and Jordan to instead follow the latter as she gets in touch, literally and figuratively, with her inner child. And while Jordan teams up with a trio of young outcasts and eventually takes on the school bully (Eva Carlton), April is left grinding it out at the office alongside a bland array of co-workers, among them a rather listless love interest (Tone Bell), all the while trying to summon the courage to push one of her pitches.

Where the dilemmas built into the film’s earlier stretches allow Rae and Martin to riff off one another, the tediously plotted scenarios into which their characters are separately thrust trade comic vitality for treacly life lessons. And as the laughs begin to taper off, the seams in the film’s haphazard construction become more apparent. Major events either materialize out of nowhere, such as Jordan and her friends’ carefully choreographed dance routine, or are curiously treated as afterthoughts given their earlier importance, such as April’s office pitch. And throughout so many meaningless incidents that don’t see Rae and Martin paired on screen, it becomes all too clear that the actresses are the best that Little has to offer.

The 100 Best Film Noirs of All Time