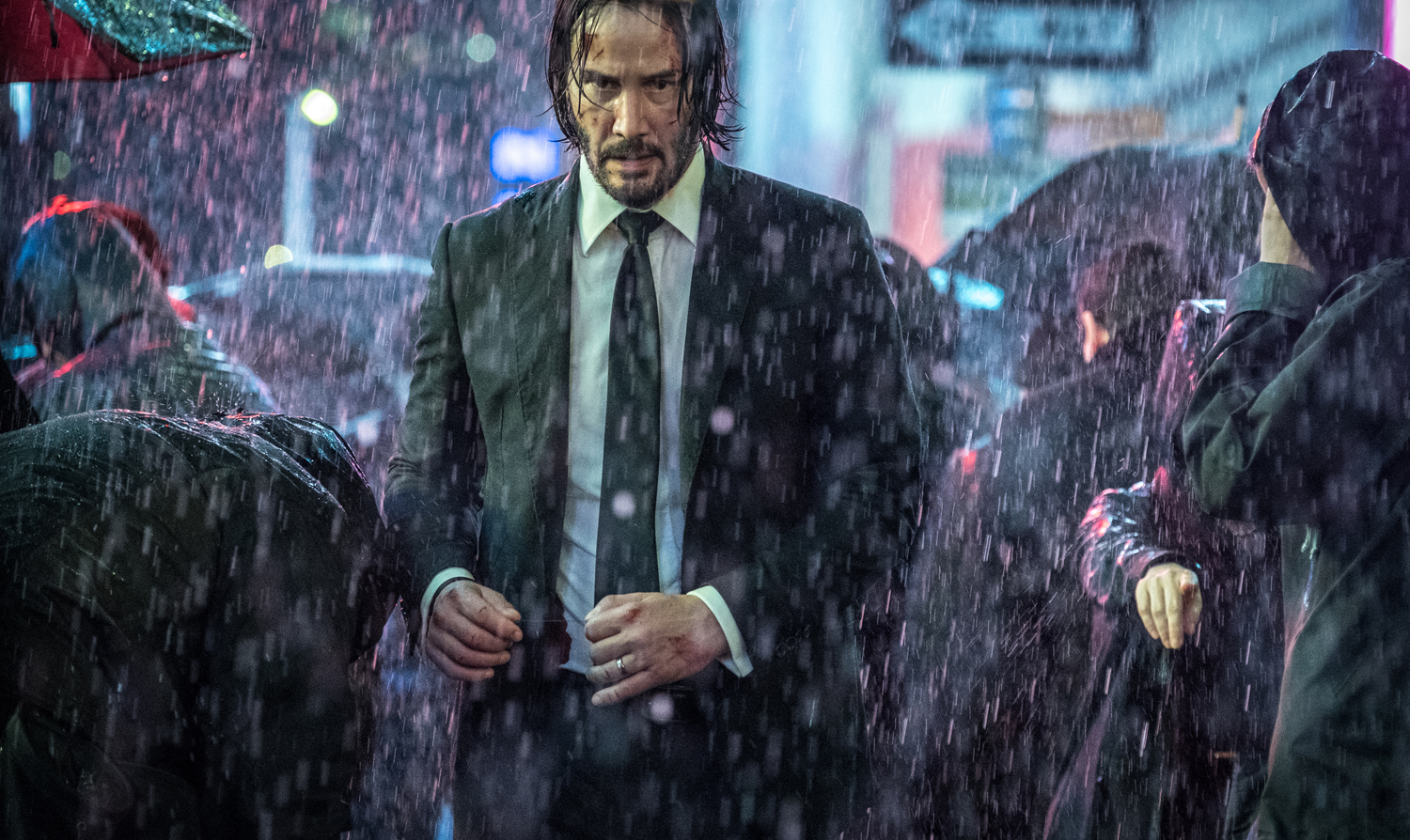 At the end of another knock-down, drag-out pummeling in Chad Stahelski’s John Wick 3: Parabellum, the man with the samurai sword sticking out of his chest says to Keanu Reeves’s John Wick, “That was a pretty good fight, huh?” It’s a throwaway gag, the kind that action directors like to use for a breather after a particularly bruising melee. But it also comes off as something of a gloat—one of a few signs in the film that stuntman turned director Stahelski, for better and worse, is content to coast on a winning formula.

The third installment in this series about a hitman who would really like to stay retired and mourn his dead wife and dog picks up about five seconds after John Wick: Chapter 2 ended. Winston (Ian McShane) gives Wick a one-hour grace period before he’s “excommunicado” from the Continental, neutral ground for members of the criminal underworld, after killing a crime lord. A $14 million bounty has been put on his head, and as roughly one in seven people in the world of the film appears to be an assassin, that means that at least two or three killers with dollar signs in their eyes chase after Wick down every Manhattan city block.

The immediate result of this in the film’s pell-mell opening stretch is that the ever-resourceful Wick kills many, many, many people. He kills them with knives, hatchets, and in a particularly imaginative sequence set in a stable, by getting a horse to kick an assailant in the face. Much of this stretch is mindful of what made the prior films in the John Wick series tick. In other words, Stahelski puts Wick through an increasingly absurd and bloody series of confrontations whose intensity plays off Reeves’s hangdog demeanor with deadpan comic timing.

That fidelity to what’s expected of a John Wick film is initially a relief, at least before the filmmakers start looking for new dramatic terrain to explore. Normally this would be a positive development. After all, just how far can you stretch a concept that’s essentially Run John Run? But all the little story beats that break up the central chase narrative, mostly in the form of hints about Wick’s origin story, ultimately do little to develop the story or character and just serve to pad out the running time with more human obstacles for Wick to stoically annihilate.

Having more or less set the entire criminal universe against him, Wick has to call in just about every favor he has. Given his long and only hinted-at backstory, that leaves the film’s writers a lot of room to play with. Jumping from one roost to the next, Wick asks for help from the Director (Angelica Huston), a member of the high-level crime lords known as the High Table, and Sofia (Halle Berry), an ex-assassin who owes Wick a debt and who’s just as good as he is with a blade and a gun, only she has a pair of kill-on-command canines at her side.

It’s satisfying to watch as John Wick 3 expands the glimmers of fantastical world-building that had previously gilded the series’s retired-killer-on-the-run narrative. The outré garnishes like the gold-coin currency, the killer spies disguised as homeless people, and the Continental—lavish, crooks-only hotels that suggest what might happen if Ian Schrager got the chance to whip up something for the mob—work as a baroque counterpoint to the stripped-down economy of Wick’s dialogue. His response to what he needs for help as the High Table’s stormtroopers close in for the kill? “Guns. Lots of guns.”

The returning cast continues to provide greater and more nuanced depth of character than is called on from Reeves, especially Lance Reddick as a serenely authoritative Continental concierge, a scrappy Laurence Fishburne as the lord of the homeless, and the ever-lugubrious McShane as the New York Continental’s sherry-sipping manager. Asia Kate Dillon also makes a fierce new entry to the series as the Adjudicator, a steely emissary from the High Table.

The production design doesn’t disappoint, either, with its chiaroscuro portrait of an always rainy and crowded New York. Splashes of neon and lens flare play off the antiquated production design. Anachronisms like old-fashioned yellow cabs and 1970s-era computers are paired with a cutting-edge armory of high-tech weapons and oddball details like the criminal underworld secretaries costumed like Suicide Girls who decided to enter the work force.

As for the action choreography, it’s as brutal as you expect, though the repetition in style from the first two films makes the effect less surprising. Wick piles up bodies by the dozen and never puts one bullet in a goon’s head when three or four will more effectively splatter his brains over the wall. Besides the previously mentioned throwdown in a stable, though, the only other fight scene in the film that stands out is the one set inside an antique store: The unarmed Wick and his blade-preferring attackers have murderous fun smashing open and utilizing the contents of one display case, throwing knife after knife at each other.

But the further the film illuminates the spiderweb of criminal enterprise undergirding its world, the more burdensome the overlong story becomes. The somewhat blasé tone that played as just slightly tongue-in-cheek in the first John Wick is starting by this point to feel like complacency. But given the repetitive nature of much of this entry’s narrative, the eventually numbing action choreography—punch, flip, stab, shoot, punch, flip, stab, shoot—and the setup for more of the same in a now seemingly inevitable John Wick 4, it’s possible that even fans could wind up as exhausted as Wick himself.

Review: Jim Jarmusch’s The Dead Don’t Die Is Undone by its Meta-Film Aspirations

Review: Perfect Is a Series of Lurid Pillow Shots in Search of a Soul