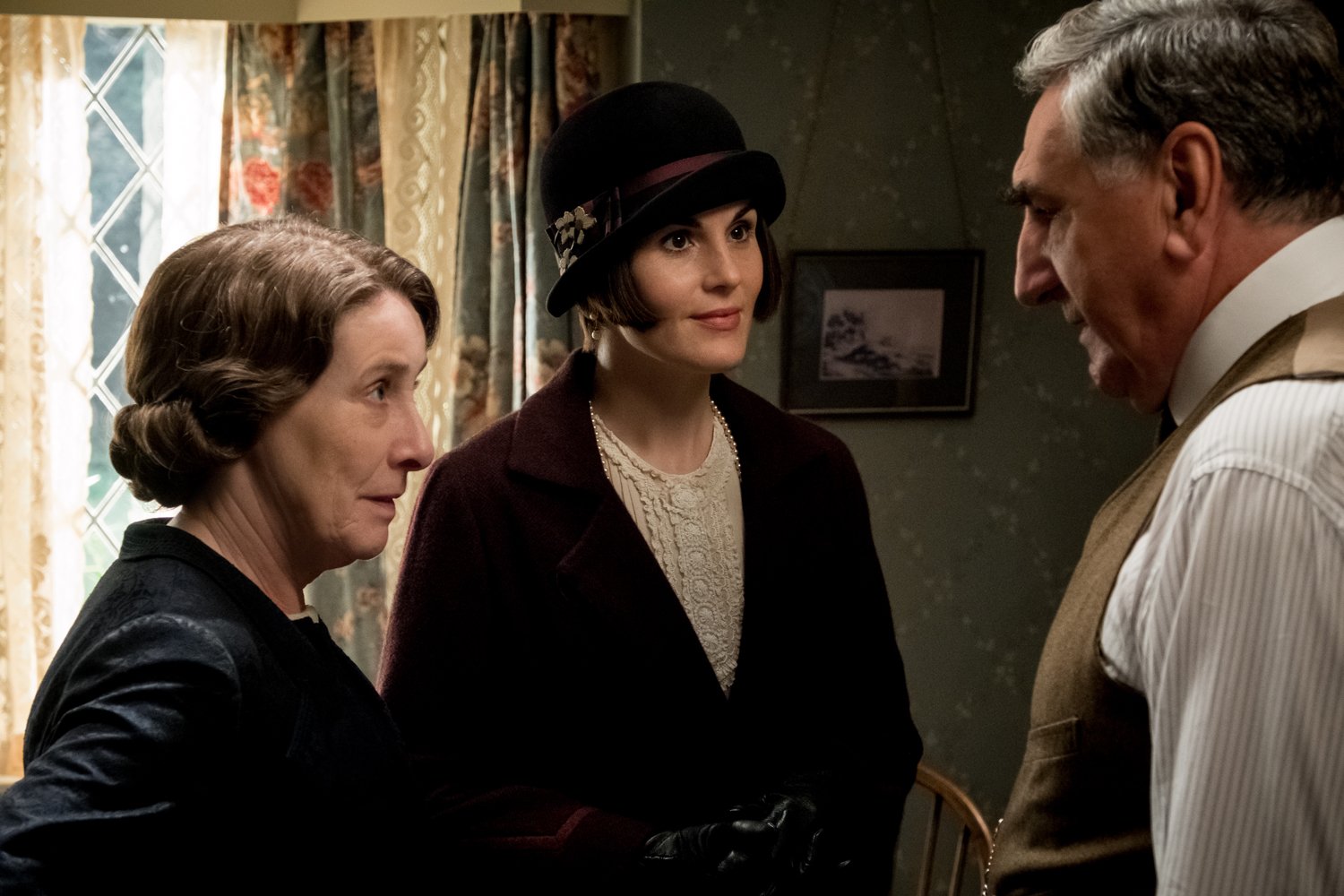 “It takes a village,” says no one in Downton Abbey. Yet there’s no more accurate a proverb, in a film that doesn’t lack for them, for the effort involved in maintaining the appearance that the British aristocracy wasn’t going the way of the dodo in the early 20th century. But for better and worse, the film reorients this existential crisis, framing it almost exclusively from the point of the view of the domestic servants to the Crawley family, who learn before the opening credits stop rolling that King George V (Simon Jones) and Queen Mary (Geraldine James) will be paying a visit to Downton Abbey. You wouldn’t know by the end of the film that Robert Crawley (Hugh Bonneville), the Earl of Grantham, ever grappled with his diminishing relevance across the six seasons of the ITV series, but you will continue to understand that his servants need Downton Abbey more than he does.

The royal visit is the axis around which the entirety of Michael Engler’s film revolves, setting up a cascading domino effect of setbacks and triumphs, all by and large yielding insights that will seem moth-worn even to the most ardent fans of the series. For one, Mary Crawley (Michelle Dockery), who at one point moves a chair and is gripped anew by the spirit of the proletariat, orchestrates Carson’s (Jim Carter) return to Downton Abbey, thus stepping on the toes of the estate’s new butler, Thomas (Rob James-Collier), whose principled indignation impresses his lord. Nothing more is made of this slight, which mostly exists to make Thomas so idle that he doesn’t hesitate to follow a breadcrumb trail into a secret gathering of homosexuals inside a warehouse in Downton village, sparking a very British scandal that’s capped by wistful talk of the status of men like him in the future.

Screenwriter Julian Fellowes, creator of Downton Abbey, has a gift for braiding together subplots that’s both delicate and conspicuous. Princess Mary (Kate Phillips) has a husband, Henry Lascelles (Andrew Havill), who’s every bit as horrible to her as Bertie Pelham (Harry Hadden-Paton) is kind to Edith Crawley (Laura Carmichael), yet both women are frustrated equally by how society says these men should devote themselves to their families. Elsewhere, Thomas Branson (Allen Leech) is trailed by a mysterious man he believes is trying to gauge the Irish socialist’s devotion to the crown, until it’s revealed that the stranger himself wants to take aim at the king. Every scene here feels as if it begins with a grenade being thrown into a room, leaving one to wonder how it will be diffused, and after a while, all you see are the gears of various sublots turning separately until they mesh together and move in unison.

Which is to say, the film is wearying, as if a season’s worth of incident has been packed into two hours. And that impression isn’t alleviated by Ben Smithard’s camera, which quite literally sweeps us up into most scenes, and regardless of their dramatic import. For much of its running time, Downton Abbey feels like an exercise in due diligence, and yet, every time one of those aforementioned grenades is diffused, the story’s center of gravity is increasingly and gratifyingly reoriented to the ground, or, rather, the downstairs: the battle waged by Downton Abbey’s servants against the king and queen’s snippy chef (Philippe Spall) and cruel butler (David Haig) for denying them the privilege—no, the right—to cook for the royals. This battle, sometimes funny and sometimes sad, is above all evocative, as all the bitter interactions between Downton Abbey’s servants and the king and queen’s own give us a complete portrait of how the class-bound nature of British society plays out at Buckingham Palace.

Only one scene in the film takes place within Buckingham Palace’s walls, an exchange that exists to set up the prickly history between lady-in-waiting Maud Bagshaw (Imelda Staunton) and her cousin-in-law, Violet Crawley (Maggie Smith). Their war is predictably strewn with a litany of bon mots, and it resolves itself in graceful, if familiar, fashion—one of many happy endings granted to the people who live, work, and love at Downton Abbey. More satisfying is the culmination of the battle between the two sets of underclasspeople, in a hilarious scene in which Joseph Molesley (Kevin Doyle) makes a public spectacle of himself and the queen casually remarks that she’s used to people acting strange around the royal family.

Here, in this moment, Fellowes springs his most bitter truth: that it’s the underclass, often against their own best interests, who are key to the continued relevance of the royal class. But Fellowes doesn’t see delusion in that per se. He’s too empathetic to make such a judgement, understanding that the familiarity of ritual, from a proper curtsy to a thorough shining of dinnerware, can be palliative, even in a world that isn’t falling apart at the seams.

Review: Monos Is a Superficial, Hedonistic Riff on Lord of the Flies