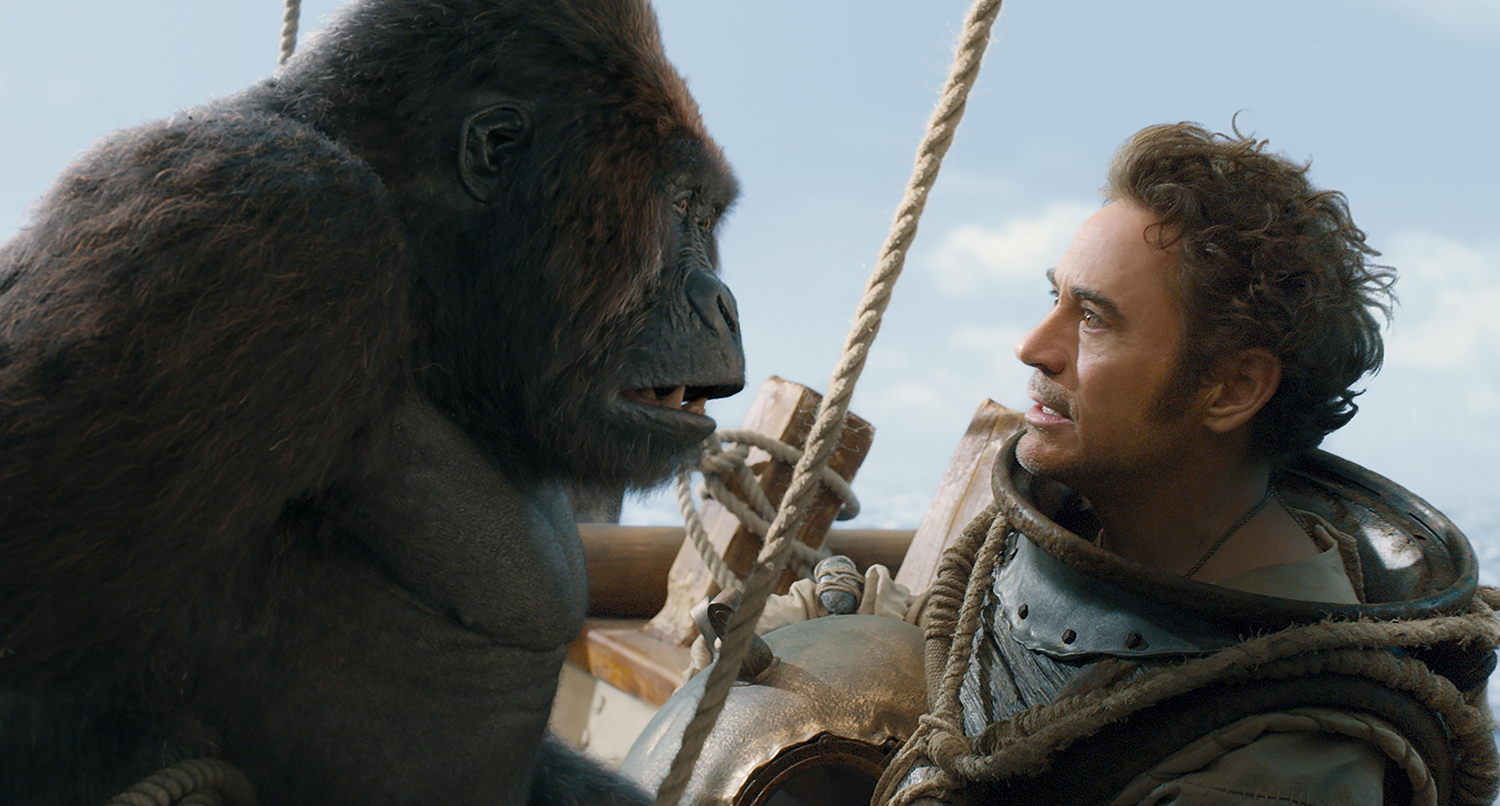 Stephen Gaghan’s Dolittle begins with a just-shy-of-saccharine animated sequence that spins the tale of the eponymous character’s (Robert Downey Jr.) adventures with his wife, who one day dies at sea during a solo voyage. It’s something of a more condensed, less moving version of the prologue to Pixar’s Up, underscoring our protagonist’s upcoming fantastical journey on behalf of Queen Victoria (Jessie Buckley) with a tinge of melancholy.

As soon as the film shifts to live action, we immediately sense the loss felt by Dolittle in the overgrown vines and shrubbery that surround the famed doctor and veterinarian’s estate, as well as in his unkempt appearance. But any hopes that the film might follow through on its promise to explore Dolittle’s emotional turmoil are quickly dashed once he begins interacting with the animal friends who keep him company. Their banter is ceaseless and mostly ranges from corny and tiresome to downright baffling, as evidenced by a pun referencing Chris Tucker in Rush Hour that may leave you wondering who the target is for half of the film’s jokes.

The tenderness of Dolittle’s prologue does resurface sporadically across the film, most memorably in a late scene where the good doctor shares the pain of losing a spouse with a fierce dragon that’s also enduring a similar grief. But just as the film seems primed to say something profound about the nature of loss, Dolittle shoves his hand into the dragon’s backside—with her permission of course—in order to extract a bagpipe and an array of armor, leading the fiery beast to unleash a long, loud fart right into the doctor’s face.

That moment is crass, juvenile, and, above all, cheap in its cynical undercutting of one of Dolittle’s rare moments of vulnerability. But it serves as a ripe metaphor for the filmmakers’ incessant need to respond to a show of earnestness with a dollop of inanity, as if believing that their young audience can’t handle anything remotely sincere without a chaser of flatulence.

But worse than the film’s failure to truly probe Dolittle’s emotional landscape is how it surrounds him with a series of uncompelling character types. While the film seems to mostly unfold through the eyes of young Tommy Stubbins (Harry Collett), who becomes Dolittle’s apprentice after witnessing the doctor communicate with animals, he serves little purpose aside from drawing the man out of his shell. And Dolittle’s arch-enemy, Dr. Blair Müdfly (Michael Sheen, chomping on every bit of scenery within reach), has little motivation to justify his ceaseless quest to stop his rival from attaining an elixir that will save Queen Victoria’s life.

Despite repeatedly paying lip service to notions of grief and opening oneself up to the world, Dolittle ultimately plays like little more than an extended showpiece for its special effects. But even the CGI on display here is patchy at best, with the countless animals that parade through the film’s frames taking on a creepy quality as their photorealistic appearance often awkwardly clashes with their cartoonish behavior. The film’s notoriously troubled production, which went so off the rails that Teenage Mutant Ninja Turtles director Jonathan Liebesman was brought on board for reshoots, is evident in its clumsy staging and lifeless interplay between humans and animals, but it’s the film’s inability to completely develop any of its characters that reduces it to all pomp and no circumstance. Like the CGI animals that inhabit much of the film, Dolittle is flashy and colorful on the outside but dead behind the eyes.