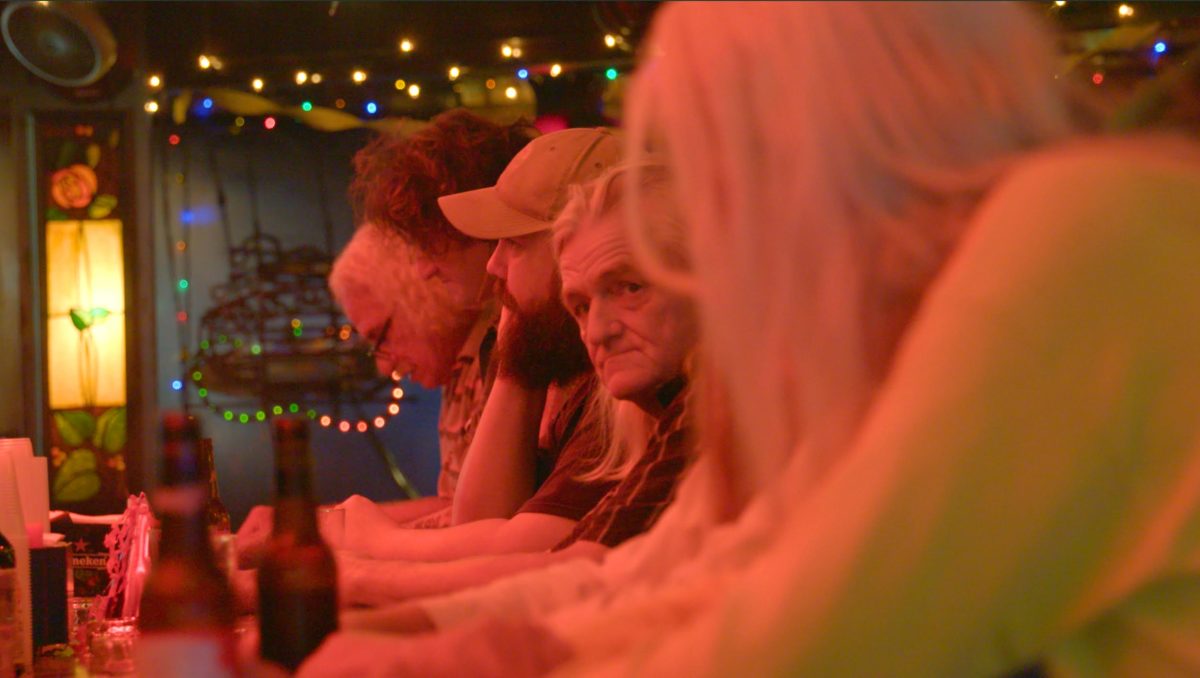 In a 1946 essay for London’s Evening Standard, George Orwell wrote: “And if anyone knows of a pub that has draught stout, open fires, cheap meals, a garden, motherly barmaids and no radio, I should be glad to hear of it.” In other words, the British author was on the lookout for the ideal watering hole, which he argues requires a combination of these specific offerings as well as more ineffable qualities. But the article’s thrust isn’t so simple, as Orwell spends the first three-quarters of it describing in detail a bar that doesn’t exist, referred to by the fictitious moniker of “The Moon Under Water.” You might think that you’re reading a rare lifestyle report from your favorite anti-totalitarian author, only to suddenly be made aware of your victimhood in a little literary sleight of hand.

Orwell’s playful essay provides the inspiration for Bloody Nose, Empty Pockets, a quasi-real-time portrait of what might be seen as an ideal dive bar by today’s standards, though filmmaker brothers Bill and Turner Ross eschew Orwell’s rug-pulling. Here, we’re never let in on the fact that the Roaring 20s, the Las Vegas haunt that serves as the film’s setting, is actually located in the Rosses’ hometown of New Orleans, or that its denizens are actually a motley crew of Louisiana drinkers (one looks like Elliott Gould, another like Seymour Cassel) that the filmmakers recruited and primed for their roles. This edifice of fakery is critical to the film’s meaning. As Orwell opined for a more perfect world where such a social space could exist, Bloody Nose, Empty Pockets fabricates its own rosy vision of social unity, drunkenly commiseration, and aesthetic perfection, if only to deliberately undercut this idealism through the staging of its narrative around the bar’s final night and the election of Donald Trump.

The Roaring 20s may not be everyone’s idea of perfection. After an Altmanesque credit sequence establishing the bar’s exterior in zooming telephoto shots, the audience’s first glimpse at the interior finds custodian-cum-freeloader Michael Martin being broken from his early-afternoon slumber by the arriving bartenders and helped promptly to a swig of whiskey, and events from this point forward tap into a similar reservoir of pity and humor. Where the beauty emerges is in the intimacy and familiarity with which the patrons are able to relate to one another as more and more alcohol is consumed. For much of the film, egos, tempers, and prejudices fall away as more and more regulars pile into the bar, increasingly constituting a diverse cross section of what appear to be outer Vegas wanderers and failures.

Limiting views of the surrounding city to brief, bleary interludes shot on an un-color-calibrated Panasonic DVX100b, the Ross brothers center the action squarely around the bar, lending everything a brownish pink patina that suggests the view through a bottle of Fireball and draping every hangable surface with off-season Christmas lights. Taken as part of a dialogue with such gems from the canon of booze-soaked cinema as Lionel Rogosin’s On the Bowery and Eagle Pennell’s Last Night at the Alamo, this auburn glow distinguishes Bloody Nose, Empty Pockets as more texturally expressive than photographically verisimilar—a film that approximates a night of inebriation rather than merely memorializing it.

Having used two cameras over the course of their 18-hour shoot, the Rosses are able to rely on montage editing to foster a sense of omniscience without losing the feeling of temporal continuity. The result is a film whose attention jumps sporadically to different bits of conversation and activity just as the beer-saturated brain of your average pub-dweller might. Part of this seamless integration of perspectives has to do with the film’s dynamic and precise use of music, which blends non-diegetic Rhodes-piano noodlings from composer Casey Wayne McAllister with popular songs heard within the bar both on the jukebox and in impromptu sing-alongs. Unconcerned with airs of documentary objectivity, the Ross brothers allow themselves to essentially play disc jockeys, and within this framework many of their choices for background needle drops land with a certain poetic gravitas, complementing, contradicting, or in some cases even guiding the emotional temperature of the room.

Kenny Rogers’s “The Gambler” is heard twice, first played by a bartender on an acoustic guitar to get the early evening energy going and later on the jukebox when much of that energy has dissipated, while Jhené Aiko’s desolate breakup ballad “Comfort Inn Ending” provides contrapuntal accompaniment to the evening’s one flare-up of macho tempers. Most affecting is when A$AP Rocky’s “Fuckin’ Problems” underscores a shot of an embittered but tender war vet, Bruce Hadnot, glowering at the end of the bar—a lengthily held beat that will be relatable to anyone who’s ever found introspection in the midst of pummeling noise. Each example hints at the melancholy direction that the film ultimately takes, and like any DJ worth their salt, the Rosses manage the transition from euphoria to pathos gradually and imperceptibly.

While all who enter the Roaring 20s achieve some kind of emotional arc before departing thanks to the filmmakers’ democratic distribution of their attentions, there are a few who emerge as main characters, and it’s in their trajectories that Bloody Nose, Empty Pockets locates the tragic soul of the bar. Michael is one of them. Beginning the day as a freewheeling conversationalist, ripping drinks and catching up with whoever rolls through, he spends the dwindling hours of the night in a dazed stupor on a corner sofa, pathetically asserting to a fellow bar patron that “there is nothing more boring than someone who used to do stuff and just sits in a bar.” In a few instances, the Ross brothers cede the floor to the bar’s security cameras, whose detachment and “objectivity” eschew the warmth of the filmmakers’ ground-level cameras, rendering the bar as little more than a physical space. Seen from this cold, inhuman eye, Michael registers as lonely, beaten-down, and insignificant.

Similarly positioned on the margins of the sociable space created by the Roaring 20s, and often identified by its more imposing and strange attractions (such as the Stratosphere and Pyramid casinos), Las Vegas plays a role analogous to the bar’s security cameras. As seen through a motion-blurred, sepia-toned camera, the city represents a reality of false hopes that’s failed the film’s humble pleasure seekers—whether in the form of dead-end jobs that have led them away from their passions or in a military industrial complex that treats its servants as interchangeable. At one point, Bruce brings up Trump on the occasion of his recent election, confidently proffering grave predictions for his presidency. The subject doesn’t get touched again, but it’s a subtext for the whole film—not the Trump presidency per se, but the mere fact of pessimism in the face of leadership. Like Orwell’s “The Moon Under Water,” the Roaring 20s seen in Bloody Nose, Empty Pockets doesn’t really exist. Even if it did, no one would save it, which makes the desperation with which its denizens hang on to it all the more touching.

Interview: Bill and Turner Ross on the Constructions of Bloody Nose, Empty Pockets

Review: Relic Is a Lushly Metaphoric Vision of a Splintered Family