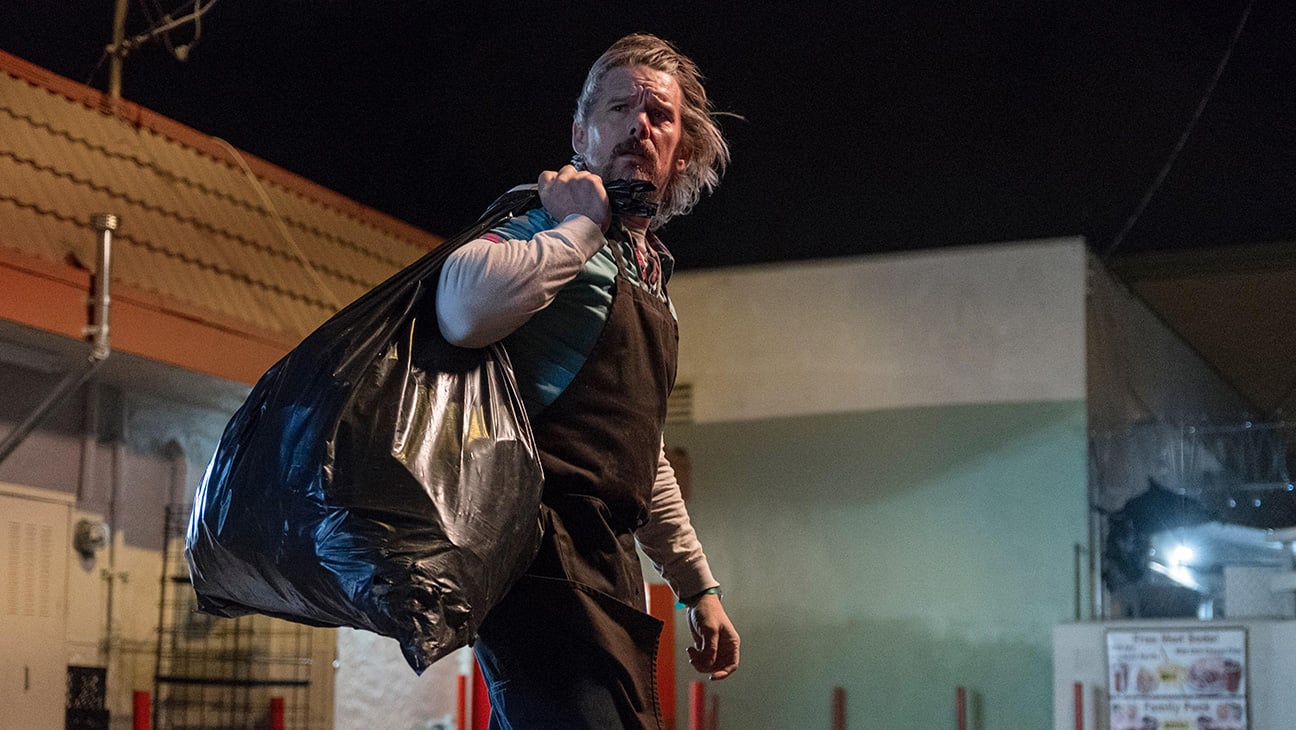 With Adopt a Highway, writer-director Logan Marshall-Green offers a sampler platter of inspirational clichés, in a presumed effort to keep the audience guessing as to where his narrative is headed. Which is a disappointment, as Marshall-Green initially appears to be concerned with the cruelty and hypocrisy of California’s now-defunct “three strikes” policy, which led to the long-term incarceration of people who committed minor crimes. Russell Millings (Ethan Hawke), who served over 20 years in prison for marijuana possession, at first radiates a compelling terror of the outside world, suggesting a person who can never be truly “released” from captivity, but the filmmaker soon turns him into a pawn—an unbelievable recipient of formulaic catastrophes and miracles.

Russell’s disorientation, upon being released from prison into the world and placed in a residence and a job at a fast-food restaurant, is initially poignant. But the film’s conception of him soon becomes ridiculous, as he’s a naïve man-child who’s barely heard of the internet and seems almost defenseless despite his stature as a seasoned ex-con. Marshall-Green stints on details that might’ve made this character palatable, such as references to Russell’s experiences in prison or his relationships with friends and family. In one of the film’s most absurd moments, Russell first learns of his father’s death while reading an obituary online, even though Marshall-Green has already established that he was never estranged from his family.

Viewed charitably, Marshall-Green’s sketchy protagonist and vague atmosphere—is Russell staying in a halfway house or a motel? How can he afford the latter on burger wages?—are meant to achieve the effect of a parable, in which an everyman stumbles through tall tales that underscore universal human needs. One may be reminded of other film fables centered around emotionally stunted men, such as Hal Ashby’s Being There, which satirized the sentimentality that Marshall-Green takes seriously, or Robert Zemeckis’s Forrest Gump, which treated its absurd scenarios with a variation of the sort of preachy literal-mindedness that mars this film.

Russell’s first adventure pivots on his discovery of a baby girl in a dumpster behind the fast-food joint. Believing that abandoned children can be adopted via a loose “finders keepers” policy, Russell cares for the baby, earnestly yet badly, for a few days before realizing that he’s committing a crime that will screw his parole. And when he’s found out, the film abandons the implications of his indiscretions. Russell takes a bus out of town, running away and soon discovering his father’s secret inheritance while flirtatiously bonding with a troubled bus passenger, Diane (Elaine Hendrix). Most astonishingly, Russell eventually returns to the scene of his quasi-kidnapping, leaving directions for a trust fund for the baby before disappearing again without experiencing even the slightest of legal complications. You may keep waiting for Russell to wake up in prison, from a dream informed by dozens of coming-of-age fantasias.

It’s awkward to watch Hawke try to breathe this material to life, especially so soon after his brutally, painfully direct performance in Paul Schrader’s First Reformed. Hawke fetishizes the social cocoon that Russell has spun around himself, keeping a personal distance from his character’s contrived simplicity: The actor’s shrewdness and intelligence are always palpable here, and are a relief, even though these qualities further compromise Russell’s reality.

Interview: Max Richter on His Ad Astra Score and its So-Called Planetary Instruments

Review: As Horror, The World Is Full of Secrets Is More Theoretical than Visceral