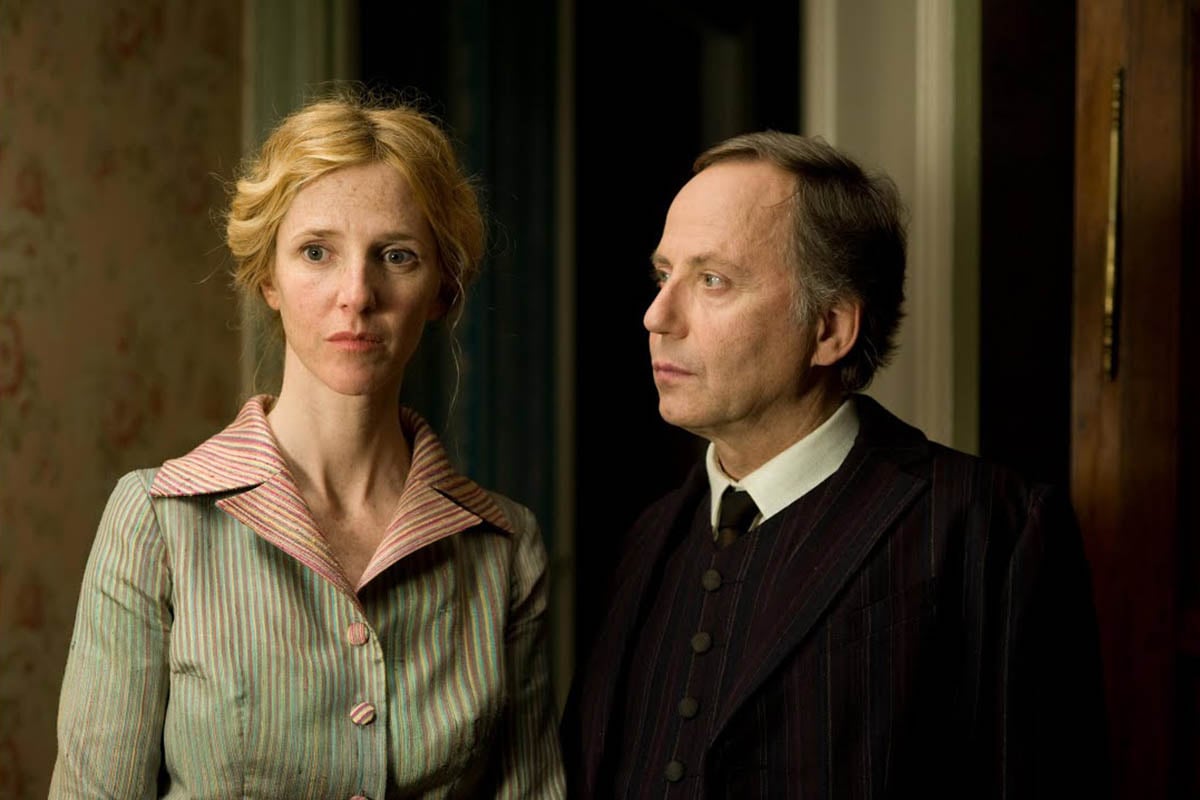 The toothlessness of Service Entrance’s upstairs-downstairs satire is immediately apparent from its tacky opening sequence: A handful of Spanish cleaning ladies treat the camera like an interviewer, talking about what they’re willing to do and what their specialties and their limitations are. This sequence is a reminder that, no matter how much director Phillipe Le Guay tries to reassure his viewer, through the most conservative and strait-jacketed humor imaginable, of how easy it is for rich white French people to stop relying on stereotypes, he’s not pushing his characters away from those loaded assumptions with enough force.

Service Entrance’s initial scene is meant to be taken as a lampoon of what white people see when they first let domestic help into their lives: women that only know what they know and can do what they can do. One maid complains that she can’t manage cooking French food, only Spanish (quel horreur!). But by film’s end, Fabrice Luchini’s fuddy-duddy protagonist is meant to learn differently, thanks to his hot Spanish housekeeper: Spanish housemaids are people too, with aspirations beyond housekeeping and a culture of their own. How Le Guay didn’t get beaten to a pulp by his Spanish cast, including the great Carmen Maura, while making this film is beyond me; perhaps mass hypnosis was employed.

The ever-charming Luchini plays Jean-Louis, a rich investment banker that is very particular about his hard-boiled eggs. His old housemaid is let go because she is pig-headedly loyal to Jean-Louis’s deceased mother, who was never fond of his uptight wife Suzanne (Sandrine Kiberlain). So they hire Maria (Natalia Verbeke), a woman whose comely charms are only enhanced by her skill at boiling eggs. In fact, it’s her preternatural ability at putting an egg into water and leaving it there for exactly three-and-a-half minutes that makes Jean-Louis wild about Spanish culture. He wants to know more about these previously unknown people, eat with them, help them solve their plumbing and domestic problems, even get them to invest their money toward building their own restaurant. After a point, he begins to spend almost all of his time on the sixth floor, the one reserved exclusively for those nice women that cook paella and clean the apartment spic-and-span while nobody is looking. This scenario would be funny if it weren’t so over-burdened with ultra-polite clichés and ludicrous assumptions about how the other half lives.

There’s no huge difference between the way that Jean-Louis treats these women and the way that his stodgy wife does. Suzanne is supposed to fit in with the blueblood crowd that complements their hired help by saying things like, “You even forget she’s Spanish. She’s so clean.” Still, it’s hard to consider Suzanne guilty by association considering that her guilt is painted with drastically smaller strokes when compared to the broad, sloppy ones that Le Guay and co-writer Jerome Tonerre use to depict Jean-Louis’s edifying encounters with his new friends.

For example, Jean-Louis learns how giving and selfless these women can be after he eats some bad shellfish and winds up in bed with cramps. One woman diagnoses him with liver problems while another insists he just has bad gas. The two bicker about it while prodding him in the gut until a third woman comes in with a bowl full of a mysterious, guacamole-esque substance. In this instance, they aren’t waiting on him hand and foot: They’re lavishing him with attention because they’re Spanish and that’s what Spanish women do for their friends, apparently. They’re chipper and helpful and just as human as house elves except they know how to make paella and none of them know are actually magical domesticated dwarves.

While Luchini makes a handful of slapsticky scenes in Service Entrance more tolerable than they should be, including a scene where Maria teaches him how to pronounce the “h” in “huevos,” the film is otherwise a condescending wreck. The fact that we’re meant to take seriously Maria and Jean-Louis’s relationship is absurd. It’s especially disappointing to see a potentially ludicrous scenario wasted on filmmakers that urge us to cheer on Jean-Louis and Maria’s totally unconvincing relationship, especially after she kisses and flirtatiously compliments him: “You’re not just a boss.” Apparently, all that’s needed to quell class warfare in Service Entrance is a little home cooking, a peck on the cheek, and a cheesy line. Take note, rich white people: This is a caricature of your life, apparently.

Service Entrance will play on March 8 and 9 as part of this year’s Rendez-Vous with French Cinema series. To purchase tickets, click here.