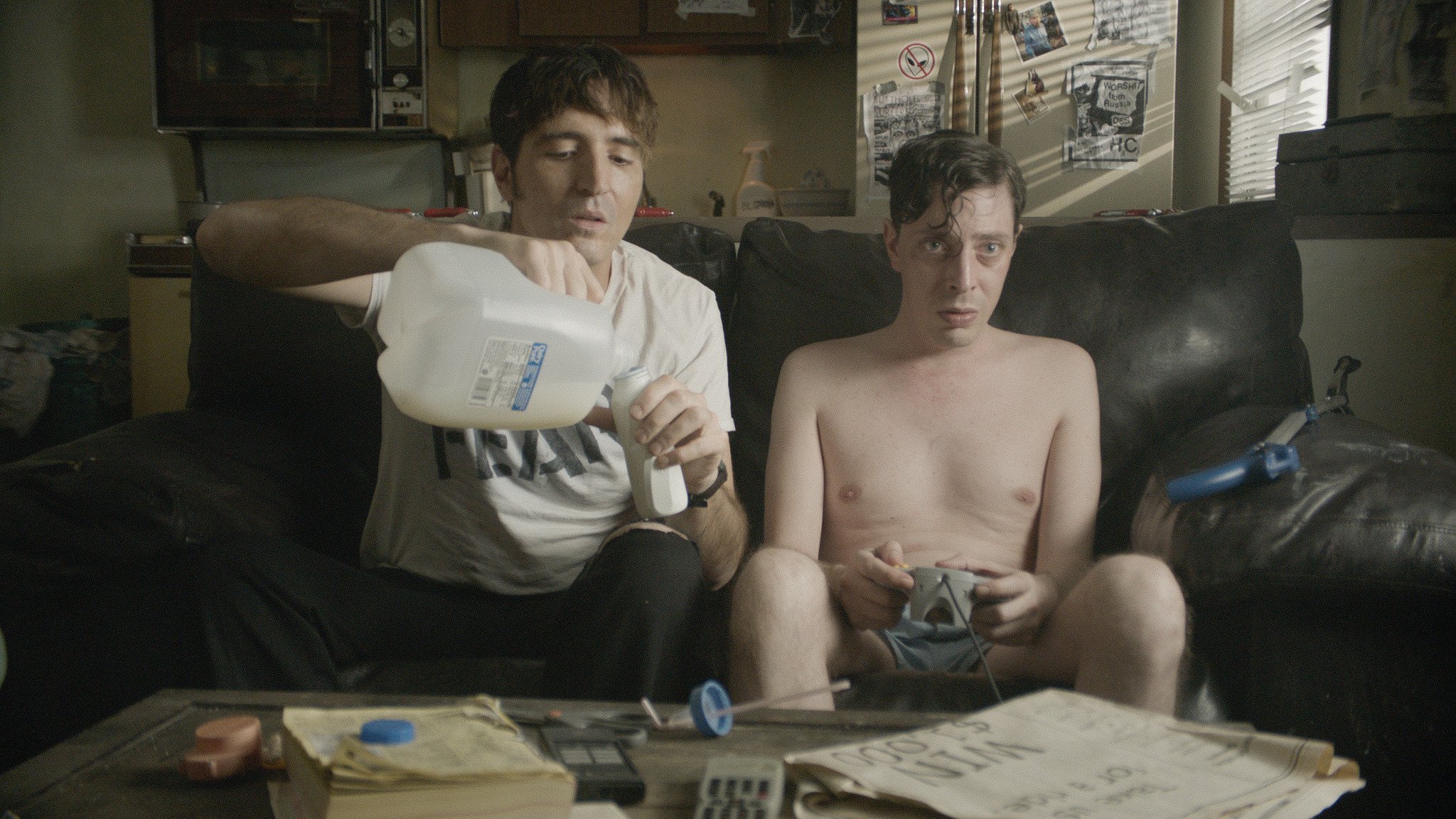 If Joel Potrykus’s The Alchemist Cookbook charted one neurotic young man’s deranged attempts to intervene with and reshape his immediate vicinity, Relaxer is about the degeneration of a single setting and human body through utter idleness. As Abbie, a pasty couch potato ensnared in a mean-spirited video game challenge that requires him to stay glued to his seat until he beats a near-unconquerable stage in Pac-Man, star Joshua Burge is more demented prop than psychological specimen, his slumped figure a canvas upon which sweat, milk, soda, dust, and his own waste can accumulate over the course of the film.

Set entirely inside the filthy living room of the apartment owned by Abbie’s brother, Cam (David Dastmalchian), Relaxer is, like Potrykus’s Buzzard, a showcase for Burge and his exceptional features, from his beady eyes to slender frame. The actor’s striking presence is critical for a character who never professes to any ambitions or considerations of life beyond this slothfully consumerist existence. A few hints in dialogue point to Abbie’s lingering trauma from his father’s disappearance, but otherwise we’re left to assess his inexplicable behavior from a remove—to scan the shell-shocked gaze he directs at a TV set for signs of inner life.

Potrykus appears to take delight in subjecting Abbie to abuse, finding increasingly creative ways to goof on his fundamental stasis—like when a dehydrated Abbie punctures a water pipe and gets splattered with raw sewage. Nevertheless, it’s hard to accuse the filmmaker of sadism since there isn’t a moment here when Abbie isn’t in full control of his fate.

Relaxer’s episodic narrative is propelled by the visitors Abbie receives, among them a concerned nurse (singer Adina Howard) and her sarcastic boyfriend (Amari Cheatom). Through the comings and goings of these guests, Potrykus establishes a full picture of the layout of Cam’s cramped apartment, not exactly exhausting the visual possibilities of the space but periodically mixing in unexpected angles to offset the film’s default view: a frontal medium shot of the couch, with Abbie on frame right and the lower half of the home’s kitchen visible in the background. In Relaxer’s best visual gag—especially funny because of how it exploits our familiarity with the space—a Russian-speaking housekeeping duo clad in polypropylene protective clothing pick up the couch with Abbie still on it, revealing a gross line of dirt on the floor and a wall doodle of Bart Simpson with a herculean stiffy.

The finest of the film’s supporting characters is Dallas, a foul-mouthed slacker played by comic Andre Hyland with the same halting speech patterns and white-boy swagger of his Jesse Miller persona. Dallas enters Relaxer as an agitator, acting as a wall between Abbie and his immediate desires (the two characters never share the same frame). First he refuses to grant Abbie’s request for pizza from Chuck E. Cheese’s, and then he buys two 24-ounce Faygo soda bottles for the couch potato if only to deny him a taste until he pays the 89 cents they’re worth. (It would seem that Potrykus’s affection for and encyclopedic knowledge of millennial junk-culture items knows no bounds.) Of course, the terms of Abbie’s challenge prevent him from retrieving the money, so Dallas taunts him with the bottles instead, at one point duct-taping them to his hands in a childish act of defiance.

Through all this, Abbie plays and plays, mashing buttons and scanning the television screen, while the methodical circular movement and chomping of his on-screen avatar gradually asserts itself as a metaphor for a go-nowhere consumerist hellscape. Potrykus’s droll world is defined by feats of man-child pettiness, by lazy guys who turn the banalities of daily life into meaningless trials of integrity. This is the milieu the writer-director knows, understands, and finds amusing, but in Relaxer, it’s hard to tell what insight is to be gleaned from it. The film takes on an element of magical realism as the days and months pass, framing Abbie as a martyr with superhuman endurance and arming him with a pair of cheapo 3D glasses with divine powers as defense from any unwanted visitors.

That Relaxer is structured as a countdown to Y2K suggests that Potrykus is offering a period-specific diagnosis of technologically dependent delusion, of the hallucinations of omnipotence that spring in the minds of marathon gamers. Fuzzy as this hodgepodge of signifiers may seem, there’s a pronounced critique at the heart of Relaxer clearly aimed at young people who are perilously glued to their screens, though it’s one that feels somewhat passé alongside the meaty class commentary of Potrykus’s earlier Buzzard.

Review: Sicario: Day of the Soldado