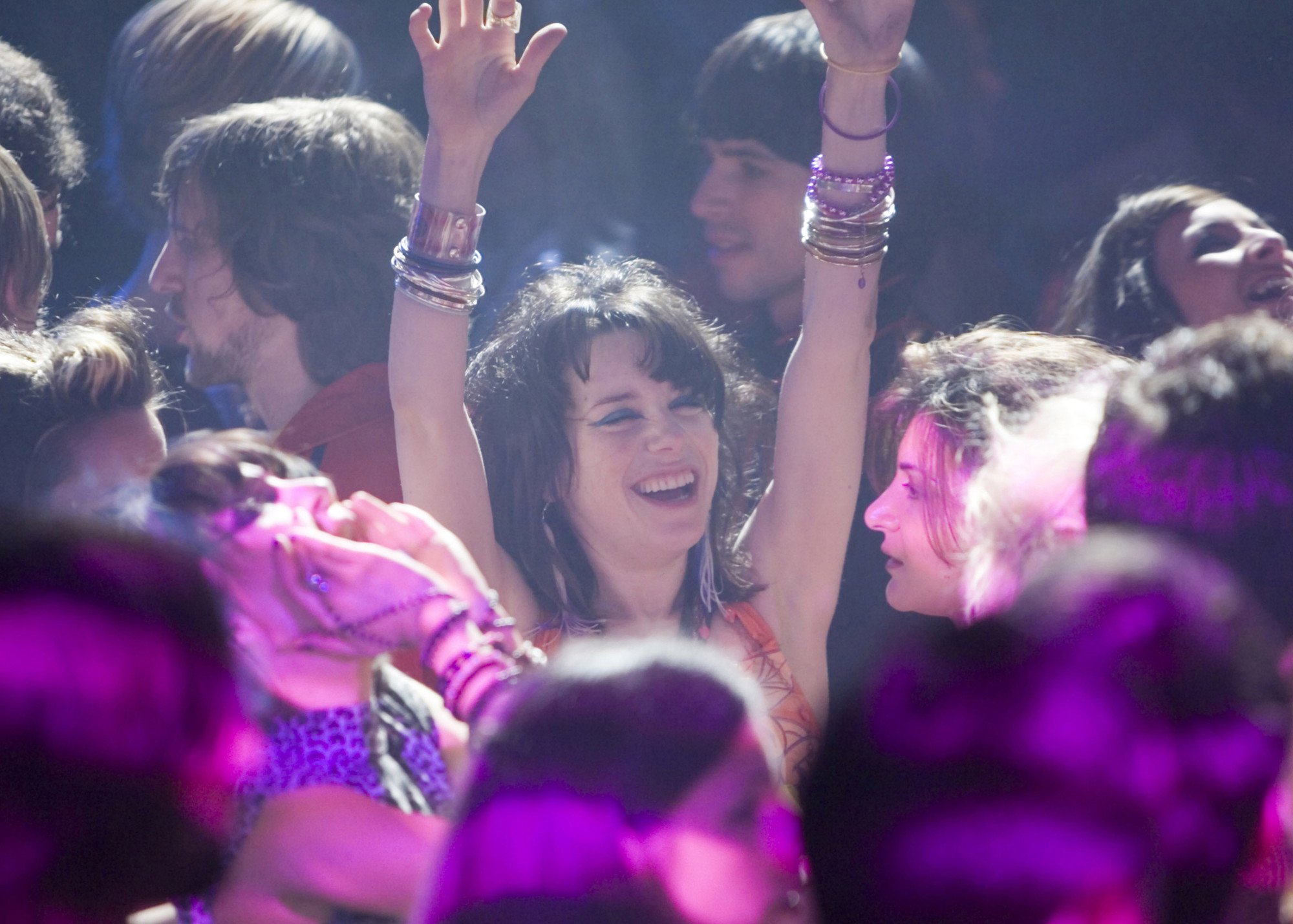 This week’s DVD releases include Mike Leigh’s Happy-Go-Lucky, perhaps my favorite film of last year, and Charlie Kaufman’s Synecdoche, New York, another film I found pretty damn great. A comparison between the two, though, reveals just why Happy succeeds where Synecdoche can never quite take wing.

In Happy-Go-Lucky’s opening scene, Poppy (Sally Hawkins) enters a used bookstore and immediately pulls a book titled The Road to Reality off the shelf. “Don’t wanna be going there,” Poppy says as she puts the book back. So we are introduced to a character it seems so many viewers are preconditioned to despise: the whimsical and quirky space cadet, uninterested in harsh reality lest it encroach upon her naïve enjoyment of life.

Poppy is overly extroverted and far too nice, the type of person we resent and pity all at once—resent because she stumbles obliviously into a happiness that eludes us and pity because such naïve happiness must be in some way a façade, ultimately empty because it has not been tempered by an honest reflection upon ‘reality’. In short, she’s annoying.

Or at least this is the response those of us accustomed to misanthropic protagonists may have. These are the characters plentiful among films that make their rounds on the festival circuit and find their way onto many year-end ten best lists: the balding, middle-aged sad sack, often overweight, unhealthy and mired in an unfulfilling life. Think of the films of Alexander Payne and Terry Zwigoff, Wes Anderson and Charlie Kaufman. The male protagonists of these films are seldom painted with pretty colors, yet, be it Steve Zissou or Miles Raymond, one virtue seemingly common to all of them is that their misery is matched only by their intellect. For all their many failings, they are reflective and thoughtful. They are, in many ways, our cinematic philosopher kings—those who have looked out to the real world while everyone else remains in darkness. They pulled The Road to Reality down from the shelf and never stopped reading. If they lack the moral wherewithal to deal with such reality, it’s hardly their fault. This makes Kaufman’s Synecdoche, New York and its protagonist Caden Cotard (Philip Seymour Hoffman) interesting counterpoints for Poppy. Caden, obsessed with his own mortality, sets out to stage a play that is “real” and speaks honestly and unflinchingly about the maladies and gradual decay of life.

It is true (certainly so in the case of Synecdoche, New York) that the sad misanthrope is often viewed critically. Kaufman’s film dissolves temporally as Caden devotes decades building countless mirrors of his life and artistic project, gradually losing himself in self-obsessed reflexivity. We are certainly not to take Caden as a role model or his life as some sort of normative standard for our own. Ultimately, it is not in exploring his own despair, but in immersing himself in the life of another that Caden finds fulfillment. It is an important insight.

Yet there is an implicit assumption at work here that I dare say permeates the worldview of many viewers and artists who gravitate toward art cinema; we expect this despair and this encounter with mortality and lack of meaning to be necessary preconditions for any meaningful fulfillment. The reflective person, we assume, must, of course, overcome the pain and misery of the world before coming to terms with life. We are allergic to those for whom happiness comes naturally, as if they are children who are inheriting a fortune they have not worked to achieve. This is why so many of us may react negatively when we encounter a character such as Poppy. We may allow that she is a more pleasant person than Caden, but she has not taken that Road to Reality down from its shelf and, therefore, has not earned the personal fulfillment she possesses.

I say “we,” of course, with the full knowledge that I’m probably projecting. But let me run with it, as this is a perspective that leads naturally to the reasons why Happy-Go-Lucky is such a profoundly challenging and essential film. The film is a character study, but more than that, it is a film about getting to know a person. It’s for the better if we enter into this project with our own expectations, prejudices and assumptions, because we always do in any new relationship. The film is very much itself a relationship with Poppy, with the method informing the content as each scene builds upon the last, adding new layers to our knowledge of Poppy and challenging our assumptions about her. We are presented less with an arc than with a careful and thoughtful unfolding of her character, bit by bit.

If we are used to our character studies beginning with subjects who are tidy and put together before gradually being pulled apart by their seams, Happy-Go-Lucky beings with someone scattered, whom we may be quick to judge, and gradually puts her together as a whole. We are introduced to her, again, as the naïvely happy and annoying quirk-ball who avoids reality and expresses, “I didn’t even get to say goodbye!” as her most pressing regret over having her sole means of transportation (a bicycle) stolen. Yet Leigh rightly reminds us that first impressions are not everything, as Poppy is not one to shy away from the darkness of the world, as in the case of the abused boy who acts out violently in her class, or the mentally ill homeless man who tells her stories neither she nor we can understand. The reality Poppy avoids is not reality as such, but a worldview where “I’m a realist” is simple code for “I’m a cynic.” Over in Synecdoche, Caden’s desire for what’s “real” and “honest” is well understood to mean what’s miserable and devastating.

As we get to know Poppy, we realize that she is not naïve at all but, rather, that she is simply a person who has the audacity to be emotionally mature. She has seen the world for what it is and she does have the moral wherewithal to productively deal with it. This is not a sardonic look at a world that does not accept our protagonist, who must therefore learn to “love herself,” as we see in many hit indie movies these days. Poppy is perfectly fine with who she is, and, what’s more, most of those who are close to her are perfectly fine with who she is as well. This is not because she is some lovable, quirky loser but, rather, because she is excellent at her job; because she is a good friend, an understanding sister and an attractive lover; and because she has the mental and emotional fortitude to deal with the troubling situations she encounters. Poppy is not a lovable underdog, nor is her happy demeanor a guise for some hidden failing or insecurity. Leigh’s film is very much an honest and unflinching look at what is real, but it is a different side of the real than we are accustomed to. It is a study of a character who is not emotionally damaged, or irreparably morally flawed.

Those who are still driven to resent Poppy for her failure to be serious or her refusal to address the gravity of every single situation find their voice in the film in Poppy’s driving instructor, Scott (Eddie Marsan). Scott, however, is far from the misanthropic philosopher king we are accustomed to. He is a sad, bitter and resentful man from a broken family, who was picked on in school. He sees Satanic influences in American culture and has succumbed to hateful xenophobia and outright racism (addressing, perhaps, much of the nationalist sentiment currently affecting Europe).

He is a homophobe, and he imposes sexual motives upon Poppy’s actions that are clearly the products of his imagination and projection. He blames these exterior forces and an austere, normalizing educational system for his lot in life. “It’s not me! It’s them!” he shouts at one moment in the film. He would certainly like to see himself as that misanthropic philosopher king, jaded, yet wise about how the world works, capable of seriously responding to it. But as each driving lesson unfolds we watch as he breaks apart bit by bit, his anger and his cynicism the products of his own insecurities and resentment.

“All I ask, is that you behave like an adult,” he says to Poppy.

Whereas Poppy’s happiness is not the result of naïveté or a lack of introspection, Scott’s realism is very much the product of emotional immaturity. Happy-Go-Lucky is honest and unflinching enough to recognize that sometimes emotional damage is not some necessary step toward greater understanding and fulfillment. Sometimes, emotional damage is simply damage.

No matter how much we may resent those who are not so damaged and to whom happiness seems a natural state of being, this film challenges us to see such sentiments as just that: resentment. There is nothing intrinsic to our suffering that endows us with wisdom, and our misanthropy does not render us wiser. This is a film that challenges any sense of resentment in identity building, and for that alone, it deserves wide praise. It does not challenge the existence of pain. Rather, it challenges our attempts to define ourselves in terms of it.

It would be a mistake to read this film as having a “be yourself” sort of ethic, as it is clearly very critical of many selves. Misfortune may lead to living a poor life, but this must be understood as a negative thing. Poppy, in her capacity as a teacher, seeks to help a young boy who may be experiencing the sort of emotional damage that Scott went through as a child. If through such efforts we are able to productively overcome misfortune, it is not because misanthropy has been championed but because it has been defeated by stronger positive influences.

At the film’s close Poppy recognizes that she might be lucky, and have an easier time with her happiness than others. “You make your own luck in life, don’t you?” Poppy’s best friend says to her in the final scene.

Happy-Go-Lucky is a challenge to its audience to learn this lesson, to be less like Caden and more like Poppy and to get on that boat sooner, rather than later.