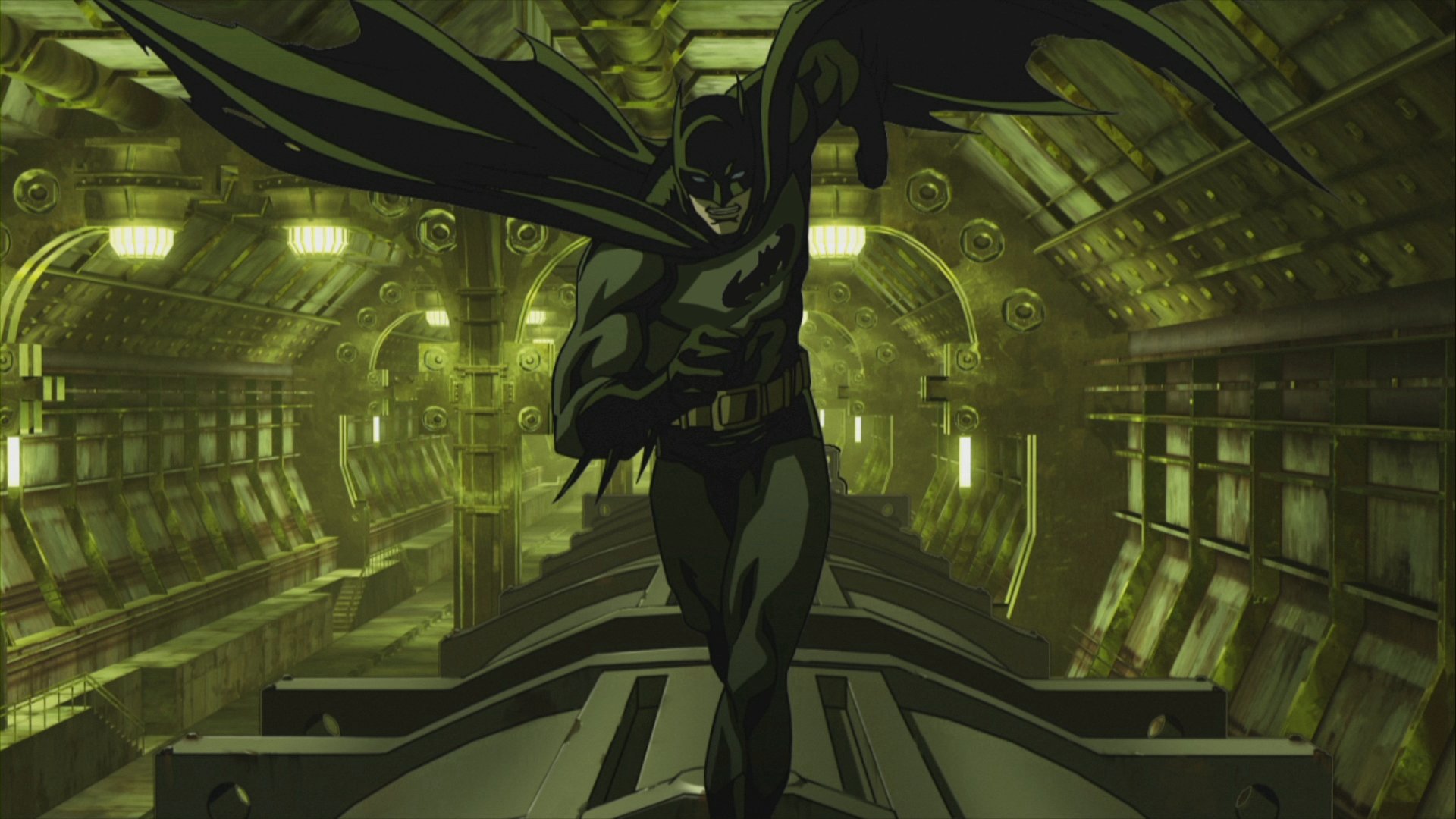 There are vast differences between the three mediums of Batman. In print, he is an icon, a brooding detective who tries to steep himself in realism but is always drawn into the fantasy realm of the DC Universe; in live-action, he is forever straddling camp with Adam West drinking milk, Michael Keaton scowling in a rubber one-piece, and Christian Bale convincing us, genuinely, that anyone can use his family’s fortune for a personal vendetta. But it is in animated form that the Batman mythos has become legendary. In a Dark Knight companion piece akin to The Animatrix, Warner Brothers today releases Batman: Gotham Knight, a six-episode omnibus featuring different teams of American writers and Japanese production houses, all to produce—well, it’s hard to tell what we’re supposed to get out of this.

Prior to Christopher Nolan’s reformatting in Batman Begins, the finest interpretation of the Dark Knight was Batman: The Animated Series, which originally aired from 1992-1995 before returning in a slightly varied form from 1997-1999. Here, the edged noir look that Bob Kane made famous came to life: Batman was a large, hulking figure who flew through 1950s inspired landscapes mixed with retro-futuristic planes, robots and themes. B:TAS even presented sly nods to longer term fans, such as having Adam West guest-voice the fictional Gray Ghost, who, it was revealed, inspired Bruce’s design of the Batman; or the Cagney-esque episode, “It’s Never Too Late,” when a mob boss losing the gang war is asked by Batman to turn over on another boss, all the while going through the motions of classic Catholic guilt. And then there’s the Emmy-nominated “Heart of Ice,” which introduces Victor Friese/Mr. Freeze into the Batman universe. It’s also responsible for ret-conning the character of Harley Quinn—who had previously never existed—into the actual DC Comics due to her popularity.

B:TAS proved what could be done with the limitless imagination of a comic-book universe, all the while paying dues to the obvious noir, horror, fantasy, and pulp influences. One week Batman could be battling the Joker, the next an episode could focus on the Gotham City Police Department and Detective Harvey Bullock (originally a corrupt cop in the comic who then became the hard-nosed, gruff stereotype we’ve come to love).

B:TAS is an incredible work of art. Batman: Gotham Knight is an awful attempt at cashing in on a franchise and little else. It begins with Have I Got A Story to Tell You, a take on the episode “Legend of the Dark Knight,” where four kids—all skateboarders, natch—assemble in a warehouse and begin chattering about the Batman each of them saw: at first he’s like a vampire (modeled after the Elseworlds character of Batman vs. Dracula, Batman: Red Rein and Batman: Crimson Mist), melting into the ground and moving at super-human speed; then he’s a variation on the Man-Bat, followed by a description of an armored man-in-suit; and, finally, he’s the bleeding vigilante that is more human than he’d like the population to believe.

Story’s art cues and visual style more than make up for the entirely uninteresting plot. Unfortunately, it’s followed by the even more uninteresting Crossfire, in which two Gotham City Police officers begrudgingly accept Batman as a necessary evil for fighting crime—an especially helpful viewpoint when they manage to park their car between two opposing gangs during a fire fight.

Field Test is another case where the art makes up for the storytelling deficiencies. Helmed by Hiroshi Morioka and produced by Bee Train, the company responsible for such anime titles as Noir and Madlax, it starts with technobabble about magnetic fields, but then it perfectly showcases how Batman, after he discovers a way to make himself impervious to bullets, co-opts his multi-billion dollar company in order to finance his personal vendetta. Of course, being Batman—and thus the personification of White Man’s Middle Class Guilt/Obsession—he quickly learns that when you have bullets flying everywhere but at you, someone is bound to be picked off.

In Darkness Dwells is a simplistic showcase for Studio Madhouse, still riding high off the success of Death Note, in which Batman fights Killer Croc and Scarecrow. It showcases how the GCPD are reluctantly working with the Dark Knight and gives a possible origin for Croc in the Nolan series, but that’s about it.

Working Through Pain is the weakest of the six, despite having impressive production values. It’s a morality tale that opens with a gunshot Batman hiding in the sewers, struggling to remember his training from an Official Indian Mystic (aka Cassandra) who once taught him that fear is the mindkiller, spice is life, and to ride sandworms or something. Quips like “pain exists in two forms: exterior, that which we cannot control, and interior, which we can,” cut like a knife, especially when you realize this was written by Brian Azzarello. Bruce replies that of course he’s researched the techniques—since he is The Goddamn Batman after all—but Official Indian Mystic counters: “What of the spiritual nature?”

After an extended montage, Bruce beats up some people and Official Indian Mystic relates this bit of wisdom: “Your pain is leading you down the path of destruction.” Meanwhile, back in the sewers of Gotham, the bullet-wounded Batman is waiting for Alfred to find him. In the meantime, he’s gone bat-shit crazy and begun digging through the garbage, finding a small arsenal of guns just lying in the trash. One by one he picks them up and cradles them in the sorriest attempt at symbolism since Crash. Once Alfred finds him, even he’s weirded out by what Batman is doing and says, “Sir, give me your hand.” Arms full of guns and clearly trying to tie this thing up, he mutters, “I-I can’t.”

Luckily, the omnibus ends with Deadshot, another Studio Madhouse production, which opens with Bruce Wayne day-dreaming about his favorite topic (his parents’ murder) before realizing he doesn’t like guns for the three-hundreth time that morning. But it eventually brings up the most interesting aspect of the Batman mythos, as he acknowledges the seductive power of a gun and how it feeds into and breeds the character of Deadshot, an assassin-for-hire introduced in a sequence that puts Golgo 13 to shame.

Yet while the episode is once more impressive on the visual level, it’s treading no new water with the character or the series. Which is basically how Gotham Knight acts: a modern undertaking on an old series, one that implies that an anime visual style is more relevant nowadays and not at all re-hashed from B:TAS. It’s clear that Warner learned its lesson with the overextended Animatrix, only releasing six animated shorts here. But they feel impossibly underwhelming when you take into account all the other animated DVDs you can find featuring the Bat. In total, only Bee Train’s submission truly stands out.