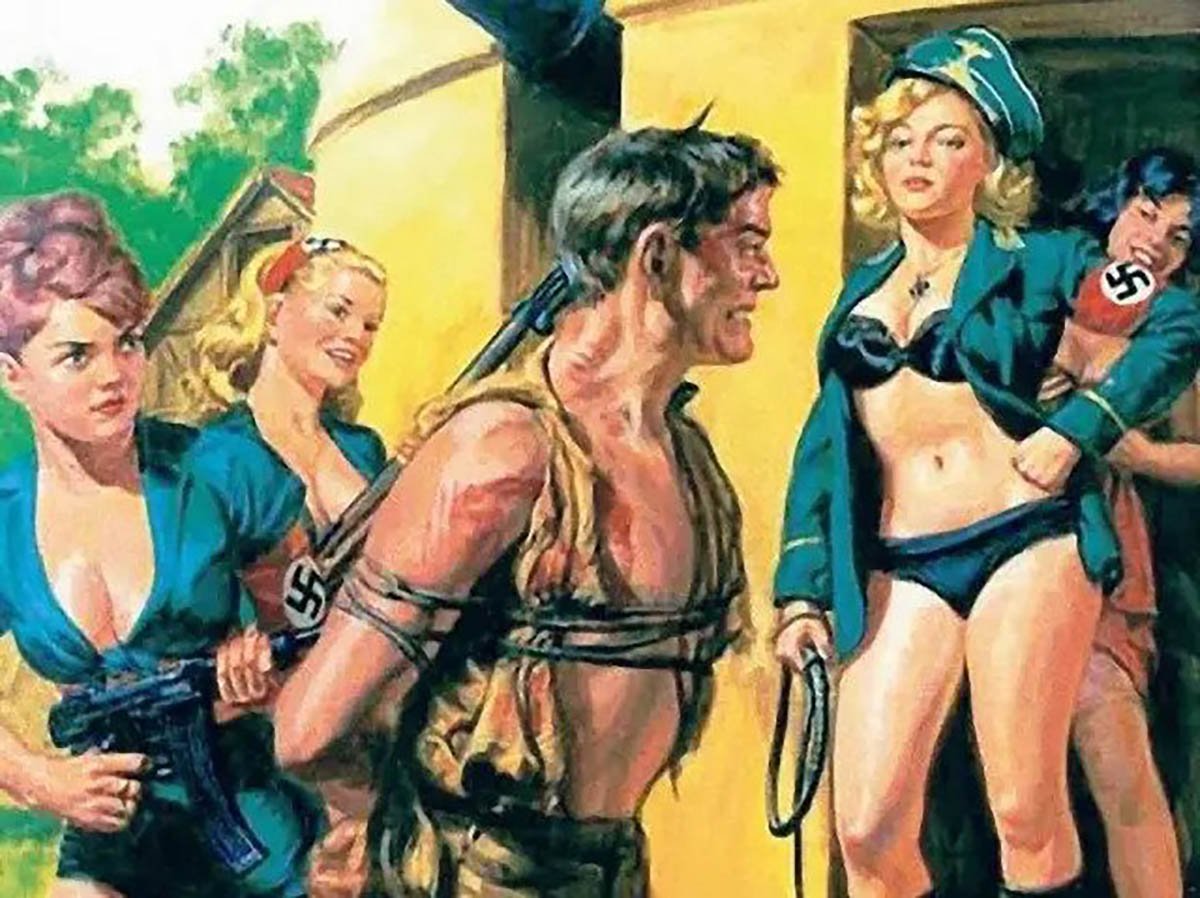 At the end of Stalags, Ari Libsker’s engrossing documentary about the Israeli Nazi-themed porn paperbacks that became a bestselling phenomenon at the time of the Adolf Eichmann trial, a survivor declares that the genocide should be spoken about in the simplest terms since the grandest words and images couldn’t come close to approaching the true horror. And Libsker, a grandson of Holocaust survivors, takes this advice to heart through a deft combination of voiceover (lurid excerpts from the stalags read by a somber baritone), archival images of daily life in Israel (mirroring the disjunction between normal appearances and the corrosive truth lurking beneath the surface), and talking head experts—both consumers and creators of the “anti-Semitic porn”—shot in B&W, juxtaposed with cutaways to the stalags’ colorful cover art (perhaps the only sign of life in the “shadow of trauma” that defined the time, each image worth a thousand words and then some). Simply put, this film is a revelation. Like the best investigative journalists, Libsker patiently sifts through each and every contradiction to discover that something that would seem so horrifically paradoxical on its face proves ultimately inevitable beneath the surface. How could Israeli Nazi pornography even exist, let alone be a widespread phenomenon? Stalags answers, “How could it not?”

For the Eichmann trial, plus the culture of silence preceding it, created the perfect storm in which the stalags became fully part of the Israeli Zeitgeist. Indeed, even as the trial was taking place the stalags were selling out (including one that featured a bureaucrat protagonist resembling Eichmann), the publishers advertising in the backs of the very same newspapers that featured trial coverage on their covers. Libsker’s film flows nicely from the stock footage of the Eichmann spectacle to the talking head journalists and historians, authors and publishers, and uncovers some amazing admissions in the process. The first stalag, selling today’s equivalent of a million copies, started out as a covert means of coming to terms with the Holocaust, but the genre eventually blossomed into a get-rich-quick industry. Libsker’s subjects all identify the tipping point occurring with an episode of a famous Israeli TV series, which featured the lead character’s daughter being caught reading a stalag. Like the B-movie knockoffs that followed Jaws, the race for the next blockbuster was on. By the time the ante had been upped to cannibalism and incest (and charges of pornography were leveled against the publishers), the stalag, like the Eichmann trial, had neared its demise.

And yet the stalags still loom large in the Israeli consciousness. Libsker interviews two middle-aged men for whom the stalags were (are?) a fetish. One man says that, as a kid, he didn’t know about sex but everyone around him was reading the stalags so, “I read them to seem informed.” When offered an actual copy, his buddy takes it, sniffs it vociferously. “It doesn’t smell. Does it? They had that smell,” he reminisces. Another guy, face obscured, who discovered his first stalags under his father’s bed explains, “That whole sexual, emotional and warlike charge produces a strong sexual stimulation. You want to be there.” And what about those sadistic guards who always get their comeuppance in the end when their victims turn the tables, rape, and torture their gorgeous captors? “I saw them as females, not as Nazis,” the man shrugs. (Of course these men represent the “children of survivors” generation, while a much younger, former Israeli officer whose German girlfriend is the granddaughter of an SS man unabashedly announces to the camera that he likes to fuck her hard on behalf of the “six million”—and that she gets turned on, too. “I’m no pervert,” he says casually. “Just an Israeli enjoying life.”)

The yin-and-yang contradictions are both endless and illuminating. One author, raised by an erratic mother who’d lost her entire family, claims the stalags were just another writing gig to pay the bills. Even though the authors hid behind British and American pseudonyms (the books were marketed as actual first-person accounts by the downed pilots, having been “translated” into Hebrew) the alchemizing of pain into pleasure was real enough to convince the average reader that former P.O.W. “Mike Baden” did indeed exist. Or perhaps the notion that Israelis themselves, the children of Holocaust survivors, were penning Nazi porn that other children of survivors were masturbating to was just too great a reality to face. As was perhaps the most controversial aspect of a topic already teeming with controversy—that the “godfather” of the stalags was a man named K. Tzetnik, a pseudonym short for the German for concentration camper (a “Holocaust everyman”) who was the first author to translate Holocaust literature into Hebrew. His book The Dollhouse was supposedly the story of the author’s sister who served the SS as a sex slave in Auschwitz’s “Pleasure” Block 24. This highly eroticized account turned out to be fiction, though it is still treated as historical fact in Israel even today with inclusion in the high school curriculum. One publisher claims that Tzetnik “opened the door” for his stalags. A Holocaust survivor (real name Yehiel Feiner De-Nur), Tzetnik himself took the stand at Eichmann’s trial—where he infamously fainted. It doesn’t get much more melodramatic than this. Sometimes truth masquerading as fiction is stranger than the truth itself.

Though not any stranger than the stalag sub-genre “Israeli avengers in Germany” in which Jews hunt Nazis and have sex with Aryan women—spawned by the real life exploits of Israelis who went to Germany and participated in the sex and crime scenes there. Nor more bizarre than my now all-time-favorite book title, “I Was Colonel Schultz’s Private Bitch,” which led to a trial to rival Eichmann’s, the book being banned for pornography, the Israeli police destroying all copies, and the immediate publication of a stalag titled simply “Schultz’s Bitch.” An old newsreel describes the stalags as books “written by experts of sexual urges” while publishers of the time deemed their material “educational” and prosecutors shot back with charges of distributing anti-Semitic pornography. One publisher counters with the claim that his books were not nearly as bad as what actually happened during the genocide. This brings us back to the idea of metaphorical reality versus physical. Holocaust-related suppression went hand in hand with sexual repression for the children of survivors. Stalags offered both a physical and an emotional release. Was not the metaphorical truth underlying the fictional stalags—the only acknowledgment of the Holocaust for many—educational? One Holocaust survivor and writer even describes how many memoirists use Mengele as a symbol for every SS officer in Auschwitz. This is not literal fact, but symbolic memoir, she emphasizes. And in a sense the stalags did something similar. What is “truth” anyway?

For the stalags were nothing more than a phenomenon of the guilt-ridden children of Holocaust survivors, for whom Mengele represented strength, the Jews who were gassed weakness. One talking head says he remembers other youth his age going to the flea market to buy SS boots—a “symbol of virility.” Many “original” Israelis blamed the Jews themselves for not emigrating earlier and wondered what cruelties the survivors had committed to survive in the Darwinian atmosphere of the camps. Children of survivors grew up with the suspicion, “My mother must have been a whore” or “My father had to have been a capo.” Even as one historian proclaims, “There were no Jewish whores in the Holocaust” another everyday Joe tells of how his friend is convinced his mother prostituted herself to survive. Silence plus shame equals sexual perversion every time.

In the end, the stalags did come full circle to a queasy reality before they reached market saturation and expired, from American and British men serving as S&M sex toys for Aryan goddesses to “private bitches” (Jewish women being raped by Nazi officers). And, in a way, this mirrors the healing process itself. An artist airs the unmentionable through the sexual, the public consumes the “medicine” sprinkled with this sugar and embraces it, until it’s ready to face it straight on. And only then can that final step be taken: letting go.

Review: Glass: A Portrait of Philip in Twelve Parts