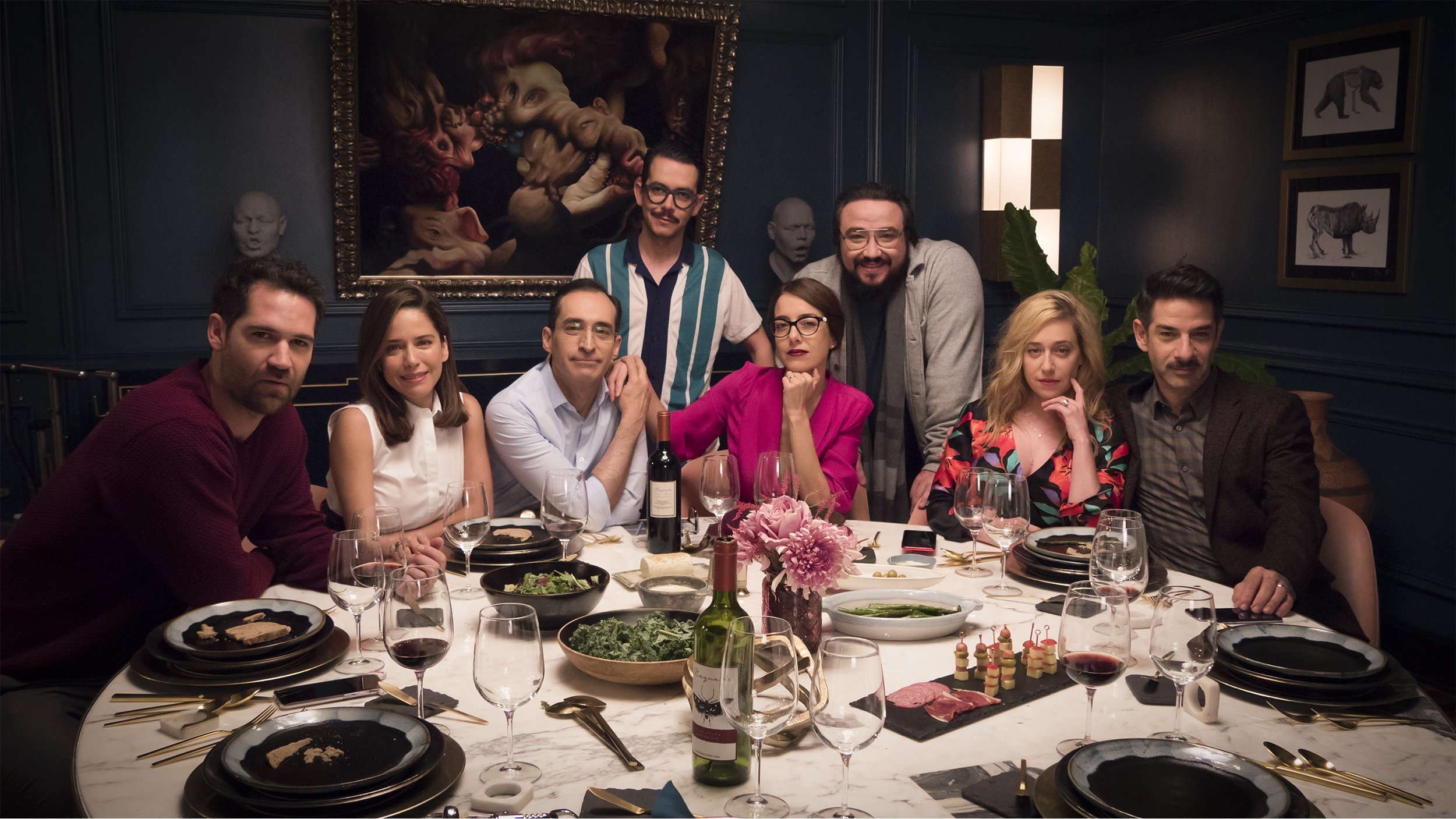 The premise of director Manolo Caro’s Perfect Strangers—one of many remakes of Paolo Genovese’s 2016 film of the same name—capitalizes on the fear of exposure that’s been intensified by the age of the internet, cellphone, and the cloud. There’s a palpable dread in our culture of a day of reckoning, in which the multiple selves we present to people are united and contrasted for everyone’s delectation in a purging of our inner hypocrisy. In the various versions of Perfect Strangers, each of which is set in a different country, three attractive and seemingly affluent couples, and one oddball single friend, agree to place their phones on a table and share every text and call that arrives over the course of a long and drunken dinner. Needless to say, grudges are aired and betrayals are unearthed, revealing the characters’ projections of stability and confidence to be carefully nurtured illusions.

This premise, a riff on a “dinner from hell” scenario familiar from many film and theater productions, is essentially limiting, as it’s engineered to do little more than prove a thesis. The plot of Perfect Strangers translates efficiently in many different languages because it’s generic, utilizing its characters as rigid markers of cowardice, lust, and entitlement. In this telling of the story, Caro moves the action to Mexico, but the narrative has no more distinction or specificity here than it did when it was set in, say, France. And this generality is dulling as well as resonant, as part of the point of the various films is to underscore the banality of many of the inner demons that hold us prisoner.

Every character in Perfect Strangers underscores a potentiality of a privileged midlife crisis. Alonso (Bruno Bichir) is a surgeon married to a therapist, Eva (Cecilia Suárez), and they’re growing to resent one another’s professions and differing parenting approaches to their daughter. Ernesto (Miguel Rodarte) and Flora (Mariana Treviño) have become similarly distant, in part due to Ernesto’s mother moving into their house, while Mario (Manuel Garcia-Rulfo) and Ana (Ana Claudia Talancón) are in the throes of passion, though they’re seemingly terrified that their bliss might be lost on any of their seething friends. Pepe (Franky Martin) appears to be the most miserable of the group, however, as he’s gained a significant amount of weight, recently lost his job, and is given to speaking of a romantic partner who may not exist. Which is to say these people all have closets that are overburdened by skeletons.

Caro’s staging is impersonal yet efficient, as he moves succinctly through a procession of exposition and twists that are unsurprising save for one, which belatedly grafts emotional meat onto the film’s contrived bones. Ernesto and Pepe trade phones, as Ernesto expects to receive an erotic picture from a young acquaintance, and Pepe could easily justify this photo as belonging to his absent lover. Caro allows the audience to forget the planting of this narrative bomb, which results in confusion when a character is inadvertently outed as gay. What follows, then, is a roleplay in which a straight man must pretend to be gay, alienating his lover as a gesture of repaying his friend’s willingness to help him cover his own tracks so as to not alienate said lover.

Though this scenario is as convoluted as many of the others that glut Caro’s film, it casually illustrates a loyalty between the men involved in the ruse that transcends their various deceptions, pivoting on a sense of trust and respect that they don’t quite seem to be capable of extending to their lovers. With this development, Caro, screenwriter Filippo Bologna, and their cast imply that friendship is easier to believe in than a romantic relationship, which is fertile ground for an uncomfortable examination of marital ennui.

This narrative thread, an unexpectedly moving rendering of the divides of gender, sex, and intimacy that fragment this group almost subliminally, should’ve been the starting point of Perfect Strangers. Instead, the film largely suggests a longer episode of Three’s Company, with wearying repartee, stereotypes, and forgettable formalism taking the place of the dangerously personal psychological manna that drives a significant dark comedy.