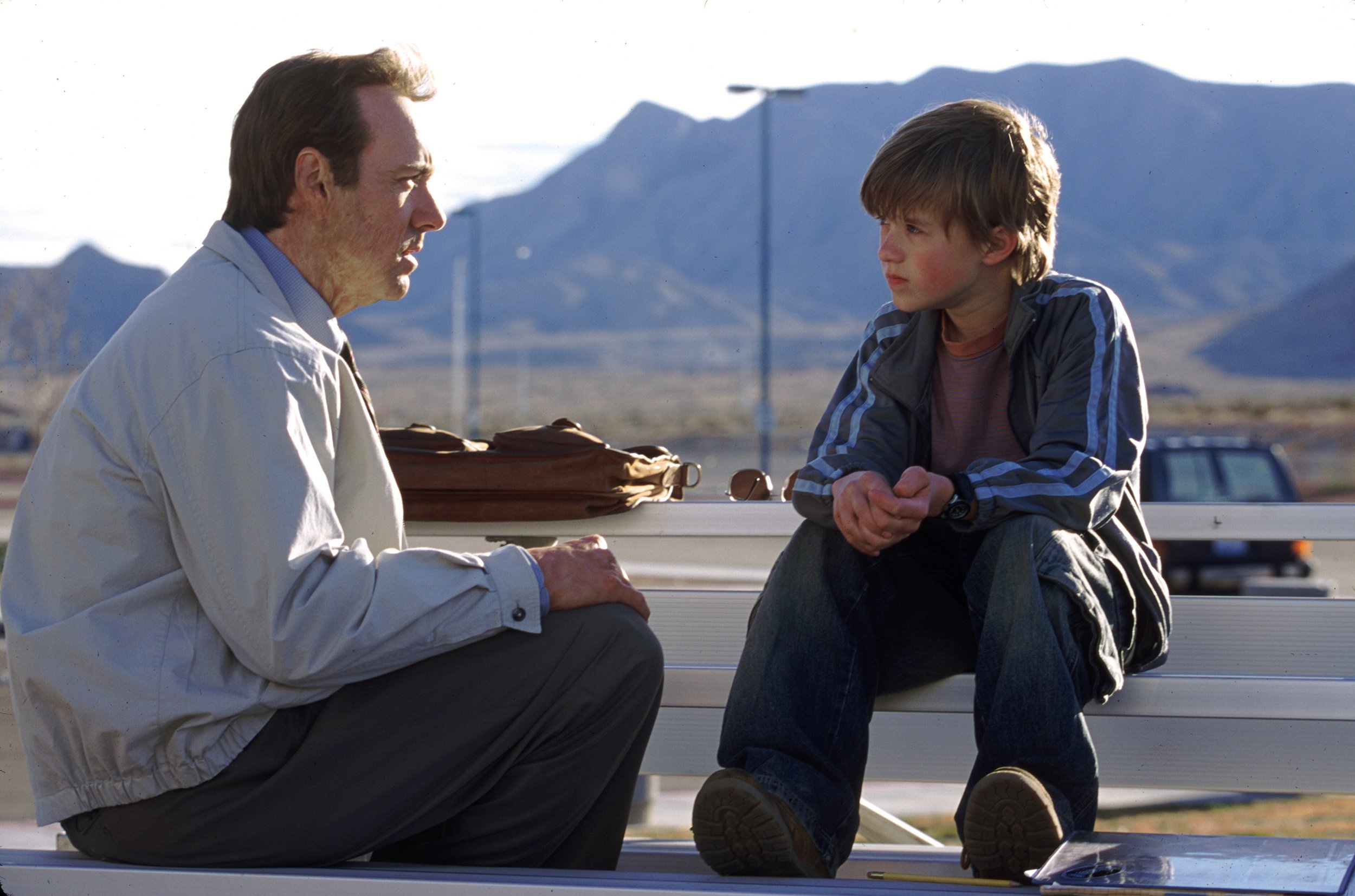 Professor Eugene Simonet (an insufferable Kevin Spacey) proposes that his students come up with ways of helping the world. Trevor McKinney (Haley Joel Osment) is such a nice boy that he rubs deodorant on his alcoholic mother’s armpits. The poor kid finds his teacher’s assignment a tad daunting but his “pay it forward” scenario goes so well that he inadvertently creates an altruistic underground movement that spreads joy across the United States. The gimmick goes like this: if someone does you a favor, turn around and do a favor for three other people. The goal here is that eventually everyone in the United States will be touched by this goodwill. Noble, yes, but incredibly naïve and difficult to swallow especially since director Mimi Leder spends the duration of Pay It Forward painting Trevor as the millenium’s answer to Our Lord and Savior Jesus Christ (see the film’s final aerial shot and subsequent AIDS-style vigil for the murdered messiah). Not unlike Catherine Ryan Hyde, writer of the book from which the movie is adapted, Leder operates under the assumption that Fidel Castro will eventually stop oppressing people if a Samaritan offers to light his cigar or dry clean the dictator’s green suit. Pay It Forward refuses to understand why inhumanities exist. Rather than tackle issues from the outside in, Pay It Forward approaches the horrors of the world from the inside out. Don’t worry if your daughter gets raped and killed or people are dying in Israel, Palestine and Ireland, just give the victims and victimizers of the world a pat on the back and we’ll be seeing rainbows soon enough. Not only does this dangerous, idealist claptrap cater to people who’ve never lived a day in their lives or hide suffering beneath put-on smiles, but its also incredibly selfish. Trevor’s mother Arlene (Helen Hunt) decides to pay her favor forward by forgiving her crazy homeless mother’s past indiscretions. This isn’t an act of humanity as much as it is a flagrant act of self-congratulation. Not only is Pay It Forward incredibly proud of its wimpy, naïve idealism, but it’s also preposterously melodramatic. When Spacey’s disfigured man-child drops his groceries and goes on about how his daddy burned his face, you may just shed a tear or two for the state of art. To think that there are people in America will take the film’s rank sentimentality as an act of humanitarianism.