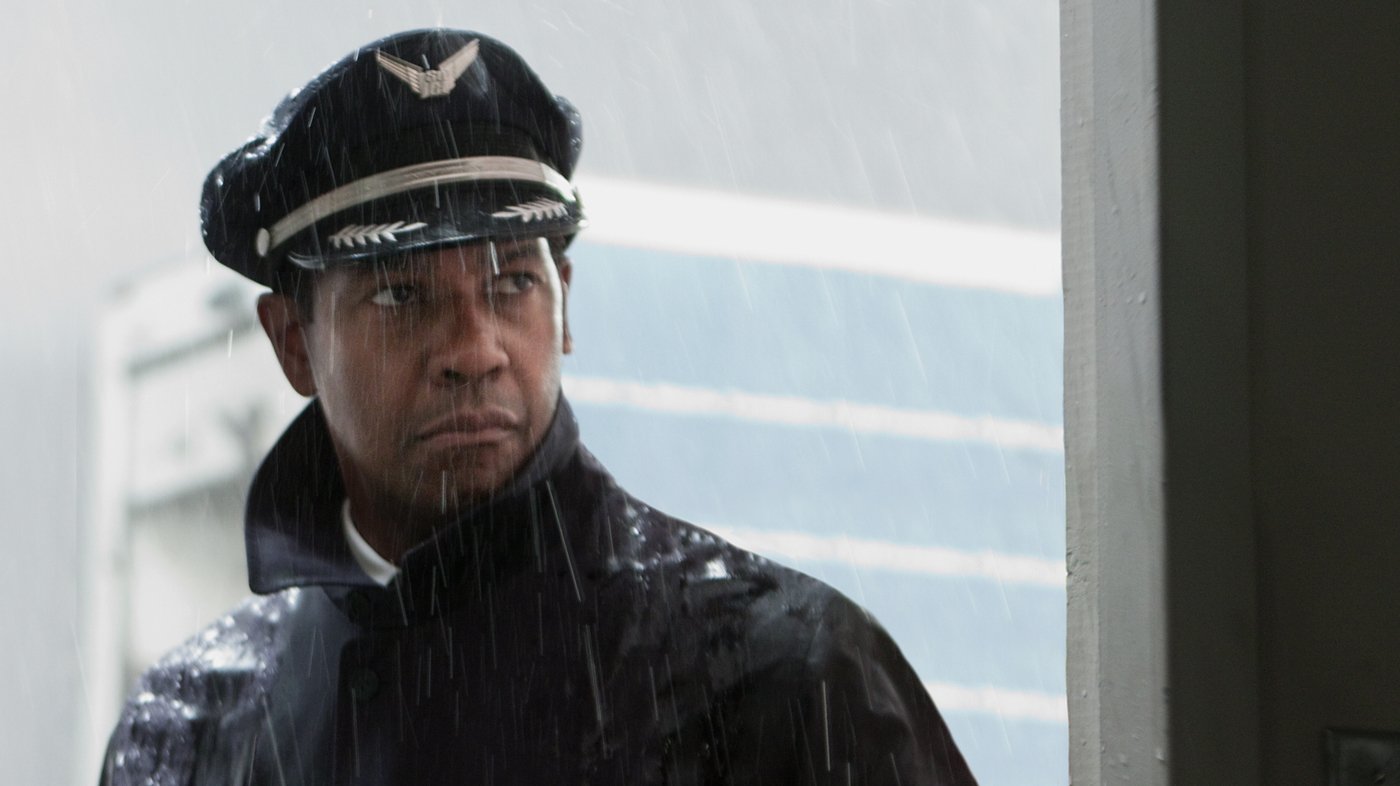 In Robert Zemeckis’s Flight, Denzel Washington stars as Whip Whitaker, a pilot with an addiction problem who guides a jetliner to the ground after a sudden failure sends the plane into freefall. Nearly everyone aboard survives and Whitaker is branded a national hero. Soon after, the pilot’s union discovers that he had alcohol and cocaine in his system, which sends Whitaker’s life into a tailspin. Believing that the crash had nothing to do with his consumption, Whitaker frantically navigates the shambles of his personal life to avoid dealing with his own problems. He’s assisted by a longtime union friend (Bruce Greenwood) and lawyer (Don Cheadle) for the airline, both of whom compromise ethical lines for their friend. He also meets a fellow addict, Nicole (Kelly Reilly), who’s more realistic about the state of her life and tries to help Whitaker recognize his.

As a character study and a somber portrait of addiction, Flight works nicely within its commercial framework, thanks largely to one of Washington’s best performances, as well as John Gatins’s rhythmic dialogue. The extent of Whitaker’s addiction is a gradual revelation the filmmakers don’t overtly tease out, and Washington strikes a balance somewhere between the disparate sensibilities of manipulation and benevolence. As Whitaker becomes more complicit with the large-scale corruption seeking to preserve his status, he steeps further into rage-infused depression, which allows Washington to carve out his character’s increasingly unbalanced behavior and self-loathing.

Zemeckis’s spotty direction, though, is illustrative of the filmmaker’s varying levels of success in different storytelling modes throughout his career. For example, the film’s centerpiece is the effects-laden plane crash, which unto itself is almost like a short film in how it builds and releases tension in a swift-moving, precisely cut package. The staggering formal detail of the sequence forges a hyper-realistic experience that stands along some of Zemeckis’s finest moments of moviemaking spectacle. But the film also exhibits some of his more heavy-handed tendencies, such as imbuing overt symbolic significance to “small” things (think of the bell in The Polar Express), which in this case is a small bottle of liquor. He also resorts to tired and gratuitous visual devices such as slow-motion and protracted close-ups for dramatic effect. The premise is already rich with allegorical and otherwise dramatic possibility, and is aided by several stellar performances, so when Zemeckis resorts to worn-out conceits, the film’s impact is significantly softened.

That Flight happily dwells within conventional boundaries can be frustrating given the raw and affecting potential of the material. But in its most effective passages, those in which Zemeckis is less self-conscious about making sure we are grasping his allusions (to God, fate, etc.), Flight conjures stirring images that cut into the relationship of technological destruction and “human brokenness,” as the filmmaker put in a post-screening press conference. For a director that has spent much of his career fashioning new uses of technology in film, sometimes with disastrous results, it’s perhaps no surprise that when he worries less about communicating big ideas, a beautiful thing can happen on the screen.

Review: That’s What She Said

Review: We Are Legion: The Story of the Hacktivists