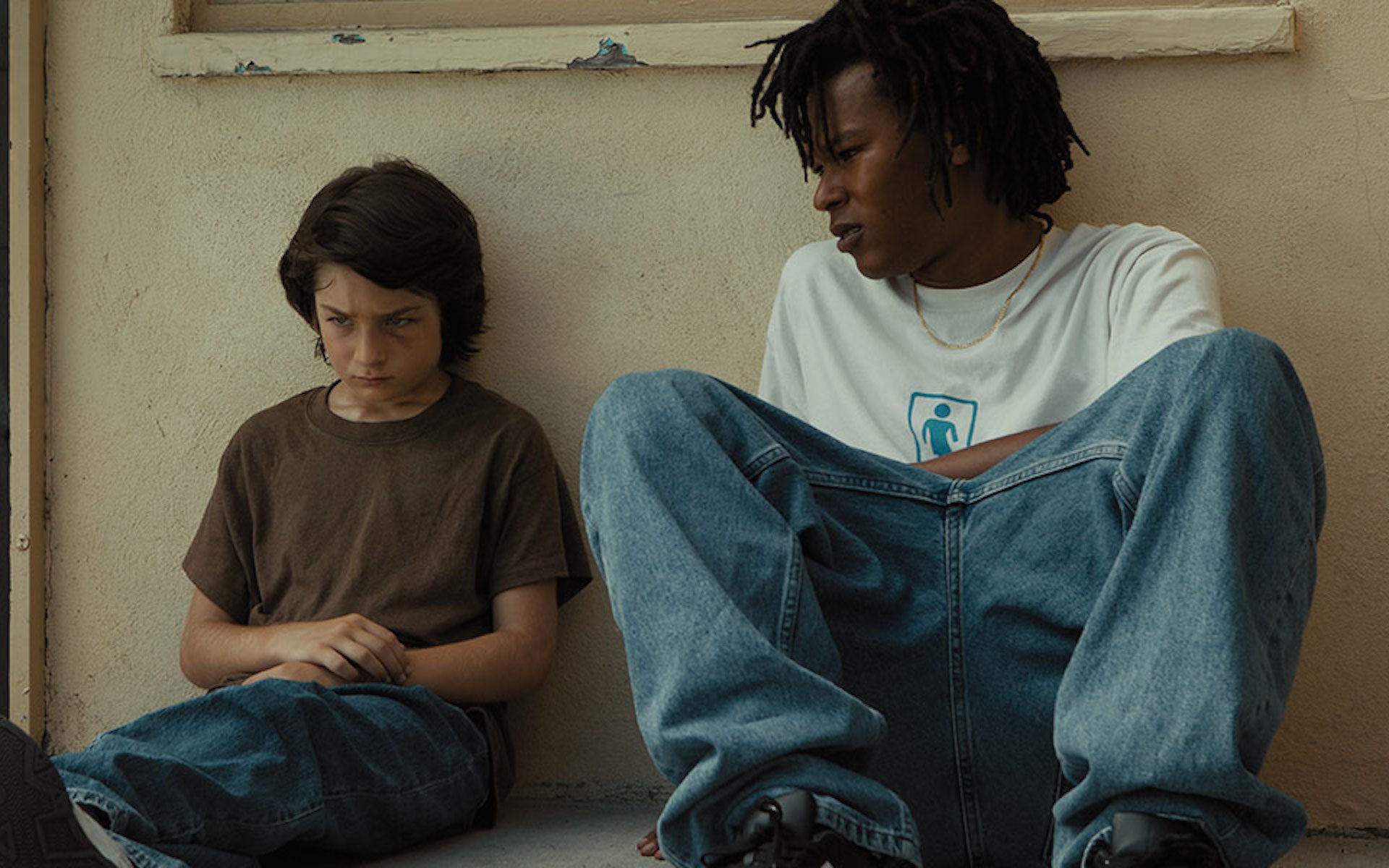 Jonah Hill’s feature-length directorial debut, Mid90s, is a repository of contemporary indie trends. Shot on 16mm stock and in Academy ratio, the film depicts a group of aimless kids living in Los Angeles whose narrow understanding of the world around them is reflected in the restricted dimensions of the frame. The narrative is less a story than a relaxed survey of the inchoate emotions we associate with adolescents and their halting attempts to define themselves. This approach has yielded a number of insightful films in recent years, but Mid90s, as its title suggests, leans heavily on millennial nostalgia for the 1990s at the expense of drama, prioritizing throwback comedy, often dully, over cogent character portraiture.

The film centers on Stevie (Sunny Suljic), a boy on the cusp of puberty who’s confounded by his hormones and the vague impression that the time has come to develop a personality. Stevie is terrorized by his moody brother, Ian (Lucas Hedges), but is nonetheless fascinated by his sibling’s erudite tastes, sneaking into Ian’s bedroom and regarding the posters, clothing, and other possessions contained within its sphere with the awe of an archaeologist uncovering a sealed tomb. Having no musical taste of his own, Stevie sits in front of Ian’s CD collection and meticulously writes down the names of all the artists he sees. Stevie is a work in progress, and in the absence of his own sense of self he seeks others to help steer him toward one.

The boy finds such people in a group of slacker skateboarders: ringleader Ray (Na-kel Smith), chief troublemaker Fuckshit (Olan Prenatt), budding filmmaker Fourth Grade (Ryder McLaughlin), and the young, aggressive Ruben (Gio Galicia). Stevie is fascinated by these kids who are so completely unconcerned with what others think of them, and despite having no clue how to skateboard, he begins to hang around them until they acknowledge his existence. The first thing one notices about these teenagers is how believable they are in their imperfections. They all have messy, sweat-matted hair, terrible skin, and crooked teeth. And their poverty is written all over their clothes, which are trendy but faded from being worn too many times out of necessity. The film’s actors aren’t rising stars dressing down to look younger, and indeed, Hedges, who’s so frequently cast as a teenager, looks far older than Ian’s teenage years when set against his younger co-stars.

The naturalism of the actors, though, is undermined by the film’s humor, which draws heavily from the improv-heavy hangout comedy on which Hill built his name. For a bunch of kids perpetually in some state of inebriation, Stevie and his new buds never lack for a quick comeback, cramming an impressive flurry of references into their ripostes. The dialogue has the working-class Shakespearean grandeur of early Kevin Smith, which is to say that the members of the cast exist as mouthpieces for Hill’s wit. But this laidback humor contrasts sharply with the film’s emotional drama.

Hill’s voice has always been one of comic rage, often parlaying short-fuse anxiety into amusing outbursts of exasperation. Mid90s, however, is often just a show of fury, as the film’s characters are prone to sudden bursts of uncontrollable anger. Unnerving scenes of Stevie and Ian engaging in acts of self-harm more than hint that the brothers are gripped by a profound trauma, but what is its origin? Throughout the film, references are subtly made to their mother’s (Katherine Waterston) promiscuity, but her general kindness toward her sons fails to account for their troubled dispositions.

The nihilistic rebelliousness of the film’s teens is obviously indebted to Kids, but Hill cannot commit to Larry Clark’s brand of defiant bleakness. Instead, he constantly falls back on providing vague justification for his characters’ behaviors, along with spoonfuls of sentiment to let the more dour moments go down easier. Stevie’s first sexual experience is shown in a moment of tenderness defined by his nervousness, and the general hardness of the boy’s friends is simplistically summarized in a monologue where Ray lays out everyone’s hard home life to make an easy point about not wishing for other people’s lives when you don’t know their pain. By resolving to such banal platitudes, the film becomes just another A24-certified bildungsroman, albeit one that lacks any of the incisive observations of its superior peers.

Interview: Nicole Holofcener on The Land of Steady Habits and Career

Review: The Land of Steady Habits