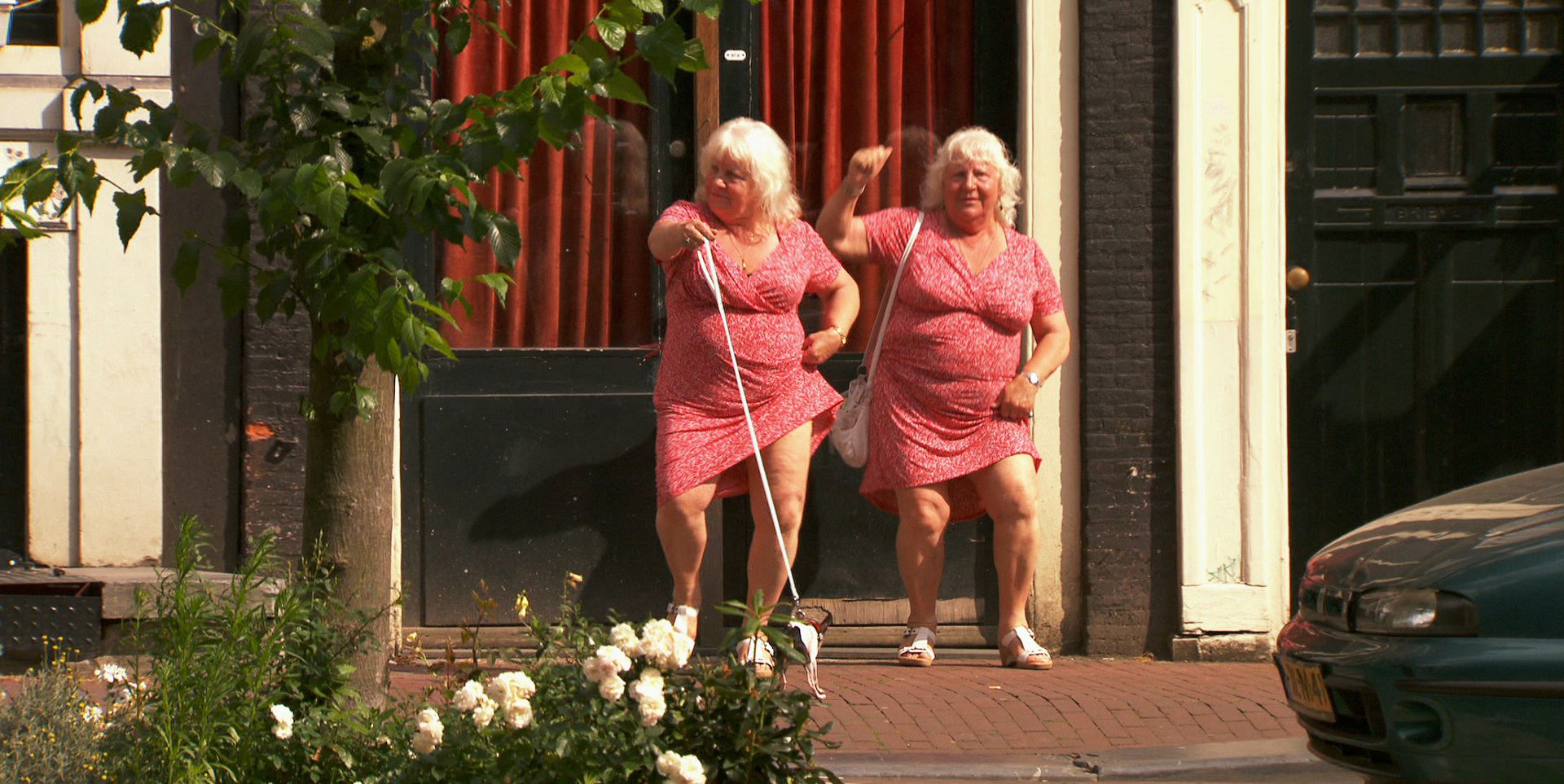 Since prostitution is unlikely to disappear from the globe anytime soon, as recent exposés have asserted with either seedy fun or grisliness, documentaries on the topic remain timely and plentiful; few recent studies of commercialized sex, however, have been character profiles, preferring the ugly sweep of industry-wide economics to the sentimentality inherent in portraiture. Bucking this trend, Meet the Fokkens is an unusual and welcome polemic. The movie takes on one of the world’s most infamous (and increasingly perilous) sex capitols, Amsterdam, through two illustrious lives that refuse symbolism and pathology: a pair of plump, sixtysomething twins, both of whom have been prostitutes since their 20s, and one of whom specializes in kink. The film isn’t without its clichés, as it more or less follows the narrative path preordained by the subject matter; peeling back the Fokkens’ monotonous prurience reveals rich and utterly ordinary private lives, full of energy and pride. But the sisters themselves agitate this formula. With lewd crabbiness and endless curiosity (their memoirs chart epochal shifts in fetishism), they quickly wrangle control over the movie’s tone. Their loud wardrobes and bric-a-brac décor seem determined to help the handheld austerity of European documentary find its lost groove.

In the opening sequence, sister Martine commutes with girlish joviality to her cozy, apartment-like booth in Amsterdam’s red-light district. (Her twin, Louise, gave up her own booth shortly before the film began shooting, due to arthritic pain.) We then watch her lure clients away from younger and, in her view, less professional women across the cobblestone street, and she tells a few stories about notable tricks she’s turned. Finally, we’re goosed with grainy footage of Martine jerking off a customer with a vibrating rod, and urging him to orgasm. This satisfies our curiosity as to the nuts and bolts of what the sisters really do while suggesting why it appeals to them: Despite the unsavory nature of the acts she’s asked to perform, Martine is always in control over what takes place in her “storefront.” Independence, we soon learn, is part and parcel of the twins’ personalities and brand. Neither sister has ever been beholden to any pimp; the two were responsible for the first self-sufficient brothel in Amsterdam’s gang-dominated sex district.

It all appears cheerily empowering (the Fokkens are the ultimate female freelancers!), but the twins dislike the work, and have always disliked it. It’s not that they feel exploited by their occupation of choice; in one revealing confession to a social worker, Martine hints that she believes she’s exploited the young, confused men who “need a place to go” and wind up ejaculating on her sheets. It’s just that, again in Martine’s words, they wish their lives had been free of “this nonsense.” With that unlikely descriptor (so laconic, so fatigued), the film’s tone becomes purposefully confused, and its question to us becomes piercingly lucid: Is selling one’s body ever a harmless endeavor, even under the most ideal of circumstances?

To flesh out precisely how ideal those circumstances have been, the film’s etiological middle thrusts us back into the twins’ sexually active adolescence, then through Louise’s teenage pregnancy and abusive first marriage. (Her husband, as we wincingly learn, was her first and only pimp.) Black-and-white family photos illustrate these stories, though they’re pocked with damaged pixels that blur the heads of the many men the Fokkens have known. The effect is spookily tragic; having crossed the threshold into whoredom, the sisters have tainted their histories, and have turned their old lovers into faceless johns. We further learn that before Louise definitively turned to the streets she bore three children, only of whom we meet in a garishly confrontational sequence. The absence of the other two reeks of even more corrosive ignominy.

Omissions of this kind from the film’s timeline comprise the bleakest and most persuasive material; what we don’t know about the sex industry’s inner-workings and the psychological effects it has on participants constitutes a singular menace to human rights. The finale implies an escape for Martine and Louise from the penetrative drudgery of their careers, and they host an exhibition of their lurid paintings to celebrate. But it’s unlikely that the other girls we’ve seen, those who strike vulnerable and desperate poses in the windows along Amsterdam’s scandalous corridors, will be so fortunate. Swarming the periphery of the Fokkens’ anomalous resilience are anonymous cripples, drug addicts, and pedophilia victims that beg for justice rather than interviews. The film’s subtlety won’t hasten legislation in this regard, yet it successfully articulates a hitherto untapped sadness fueling red lanterns all over the world. Meet the Fokkens will be applauded for dignifying its subjects, but the film more crucially asserts that Martine and Louise, like all prostitutes, deserve better than a job that constantly threatens their dignity.