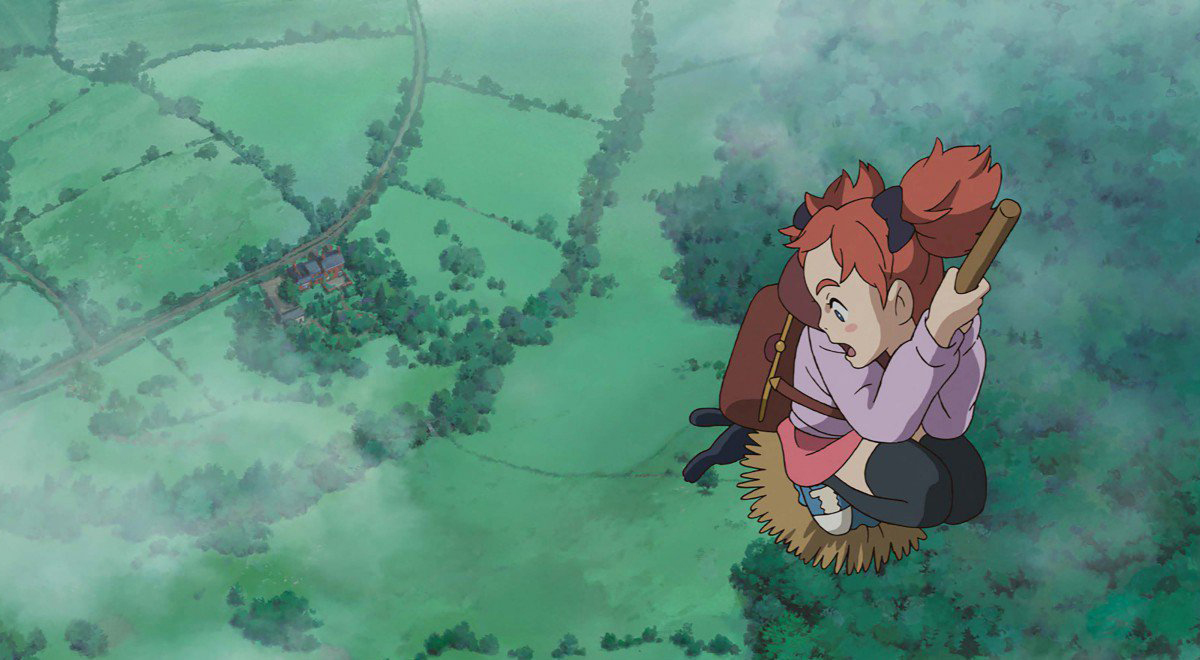 Based on Mary Stewart’s 1971 children’s novel The Little Broomstick, Mary and the Witch’s Flower, the first animated feature from the production company Studio Ponoc, confirms director Hiromasa Yonebayashi’s intuition for the incongruity of coming into one’s own. It’s the last days of summer and Mary (Ruby Barnhill) finds herself isolated and bored in a rural British village, living with her great-aunt, Charlotte (Lynda Baron), while she waits for her parents to move into the family estate. Well into her awkward teenage years, Mary is a free spirit who’s also something of a self-conscious klutz. At first, there isn’t much to her lazy life beyond being petulant toward Peter (Louis Ashbourne Serkis), seemingly the only other young person in this corner of the world—that is, until Peter’s cats reveal the film’s affectionately rendered countryside to be abundant in secrets straight out of a fairy tale.

After coming across the eponymous flower and a magic broom, Mary is energetically whisked from their humdrum British hamlet to Endor College, a school for witches and wizards where she’s mistaken for a pupil and quickly becomes a favorite of the stately Madame Mumblechook (Kate Winslet). At Endor, the instructors specialize in cultivating witches and wizards who excel in mind, body, and spirit, and it’s here that the film truly takes flight, delighting as it does in the peculiarities that abound throughout the school’s many rooms, from the strange lessons on transformation to the even stranger non-human creatures who work for the school. Inside the cafeteria, for example, a chef with a snout makes “mouth-wateringly delicious” meals—including roast pig—using the force of his heat-emitting and levitating powers.

These scenes are steeped in the dreamlike wonder of Endor, and there’s a sense that the visibly excited Mary finally fits in somewhere. But after realizing that her teachers are obsessed with finding the witch’s flower and are transforming innocent creatures into monsters, the girl springs to the rescue. Mary and the Witch’s Flower is a film about the adolescent pangs to belong that also mines its tale of magic and malevolence for an imaginative allegory about the excesses of scientific inquiry. Endor is powered as much by electricity and cyborgs as it is magic charms and potions. The story suggests that magic and science aren’t so different—and equally susceptible to abuse. The wonder and potential for evil that stems from science and magic experiments thus lend the narrative its psychological and moral backbone, giving even the initially vaudevillian Madame Mumblechook and conniving Doctor Dee (Jim Broadbent) decidedly more complex dimensions.

But while Mary and the Witch’s Flower is transporting and dynamic in its inventive world-building, its hero is ultimately flat by comparison. Despite initial suggestions that Mary, longing for a place where she feels comfortable, might be just as tempted by the power of the witch’s flower as Madame Mumblechook and Doctor Dee, Yonebayashi quickly shifts his attention to her almost arbitrary fight to save Peter. Given that up to this point in the film Mary and Peter shared only a few mostly contentious interactions, the rush to save him seems to come out of leftfield. This all paves the way for much action in the film’s latter passages, but we’re ultimately left with a prosaic race against time that feels far removed from the initially complex psychological investigations of a young girl figuring out her place in the world.