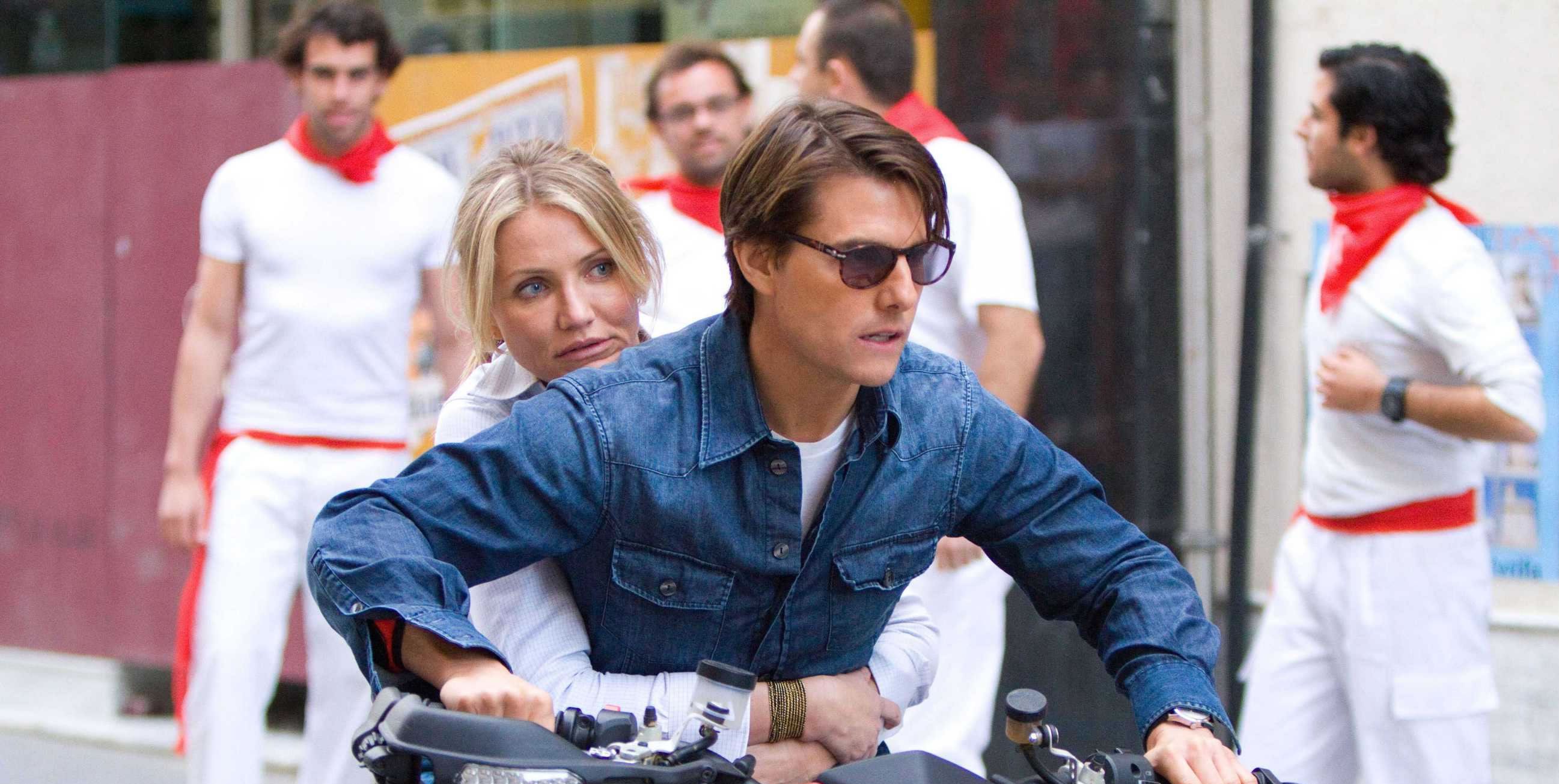 By now, one expects contemporary films that purport to love ‘80s genre films to be contrived. So many of today’s studio-produced love letters to properties of that earlier time are misappropriated fan service, and hence knowingly purposeless. While Knight and Day isn’t a sequel, comic book movie, or adaptation, it does recall the bygone days when almost every generic TV show and movie was defined by the buddy system. In those wild and wooly days, it seemed like every cop, lawyer, private investigator, bounty hunter, and truck driver teamed up with someone that was his or her polar opposite. In Knight and Day, she’s a delicate, even precious, tomboy and he’s a deranged spy. That’s all the setup you need and all the setup you get.

Though buddy films are laughed at now as the epitome of an era of genre entertainment, Knight and Day announces its intentions to channel that same chintzy kind of opposites-attract and sparks-fly logic in is title, which sounds like a TV show that should be screening after Sapphire and Steel. Thankfully the film never mimics any other genre staples of the period that spawned that subgenre or any specific characters. While it’s refreshing to see screenwriter Patrick O’Neill and director James Mangold channel that spirit without trying to draw attention to their influences, neither man knows how to get the tone of their pastiche right. O’Neill and Mangold’s approach is hyper-mannered, never really cuts loose. They know what they want to say and it’s all on screen in some form or another, but the film’s set pieces, banter, chase scenes, and central power dynamic between its male and female leads are all so ill-conceived and flat that the film never really pulls itself together.

One of the biggest mysteries of Knight and Day is figuring out who exactly the film is primarily for, seeing as how O’Neill indecisively and mercilessly jerks the film’s focus between its dueling lead protagonists. Ditzy tomboy June Havens (Cameron Diaz) is our gateway to the frenetic, or, more accurately, busy world of secret agent Roy Miller (Tom Cruise). Miller projects the image of a suave face in the crowd, doing his best to flirt with her and keep her calm by acting as calmly as possible while he takes out a handful of ruthless government agents that he claims are not who they appear to be. Those agents have another story, of course: Agent Fitzgerald (Peter Saarsgard) tells Havens that Miller is mentally unbalanced and working for the other side. Then again, Miller warns Havens that that’s what they’ll tell her. Miller is after all a can-do, know-it-all badass. His man-of-action attitude theoretically makes him the person the film’s plot should orbit around. At the same time, Havens is still very much the fish out of water that guides us through Miller’s world. She’s alternately confused by the discrepancy between his violent actions and his implacable facade of sweet words and toothy smiles. I’m sure that’s what Oprah thought too, right before Cruise stormed her couch.

That push-and-pull dynamic created by the plot’s alternation between Havens’s inability to either feel comfortable empathizing or being seduced by Miller, and Miller’s own habit of killing faceless grunts and driving around in luxury cars (sometimes he does both at once!), makes the film feel like a weird cross between French Kiss (especially thanks to its cheesy, accordion-heavy score) and Ronin, creating a Frankensteinian film out of ill-fitting used parts. Clearly O’Neill and Mangold are trying to give viewers what producers would undoubtedly like to sell as “something for everybody,” but there’s no consistency to the thing and no chemistry whatsoever between Cruise and Diaz, making the alternating tug-of-war between girly and manly elements of the film seem extraordinarily forced.

Granted, Mangold handles Miller’s macho world a lot better than he does the one ruled by Havens’s fears and neuroses (while she powders her face in an airplane bathroom, she frets so much about catching Miller’s eye that she doesn’t even hear him violently beating up a cabal of baddies in the film’s worst, most Greengrass-esque action sequence). Still, that’s not saying much considering that most of the action and chase sequences in the film look like they were aped from video games like SpyHunter. In fact, O’Neill has Havens make a joke when she breathlessly tries to explain to Rodney (Marc Blucas), her ex and a small-town boy next door, that her life since meeting Miller has turned into something out of Grand Theft Auto. It’s spy action and violence straight out of the most garish and unremarkable playbooks and yet, because Mangold wants to give the film a respectable facade, abusing his usual tendency to shoot conversations entirely in close-ups using grainy but high-end digital photography, everything surrounding those scenes suggest that you’re about to get something sleek and stylish. In other words, something he just can’t deliver, especially considering that some of the actions so clearly want to look like car chases from a John Frankenheimer film by way of the last two Die Hard movies, but once again, the clash of those two styles doesn’t produce anything more than an indecisive series of misfired generic cues.

More importantly, O’Neill and Mangold don’t know how to make a smart and approachable romantic subplot, probably because they have no idea who Evans should be from one scene to the next. One moment she’s a small-town girl that knows how to take a car apart and can defend herself in a fist fight and the next moment she’s a needy ditz clinging to her white knight’s arm. When given a truth serum by one of Miller’s enemies, she inappropriately blurts out that she wants to have sex with him while the pair is still under fire from more faceless goons that have contracted Storm Trooper Syndrome. At one point she tells Miller that he brings out a more self-reliant, tough side to her otherwise indecisive demeanor, but again, she says this right before giggling about wanting sex during a gunfight after having been injected with truth serum. This could be a clever way for Mangold to make a strong female protagonist out of Havens, who appears to be a stereotypical flighty blonde from the start, but if that were true, she wouldn’t need Miller to emasculate her.

To top it all off, she has a nasty habit of being drugged by Miller, among other people. Over the course of the film, she’s drugged three times and knocked out three times. This would almost be cute if Mangold didn’t include a severe scene shot from Evans’s POV one of the handful of times she’s under the influence. It’s one the most evocative scenes in the movie and yet it’s also hilariously inappropriate in how serious it is about making various locations blend together as a result of some highly effective date rape drug. Nothing says romance quite like blackouts and blurred vision—right, ladies? The tables are apparently turned by the end when Evans drugs Miller, so no hard feelings, I guess. Still, in what universe are roofies a valid substitute for foreplay?

There are hints throughout the film that O’Neill and Mangold understand and even really want to temper the flamboyance of the two dueling plot threads. But honestly, that doesn’t really matter in a film that vacillates between a dumb (but tough!) blonde and a fittingly charming but sleazy guy’s guy as poorly as this one does. The filmmakers appear to have gotten so caught up in figuring out how to treat the film’s frequent druggings seriously or how to more realistically zoom in on Cruise’s pearly whites that they forgot to address the film’s more pressing problems. If only that weren’t par for the course.

Review: Yasujirô Ozu’s I Was Born, But…