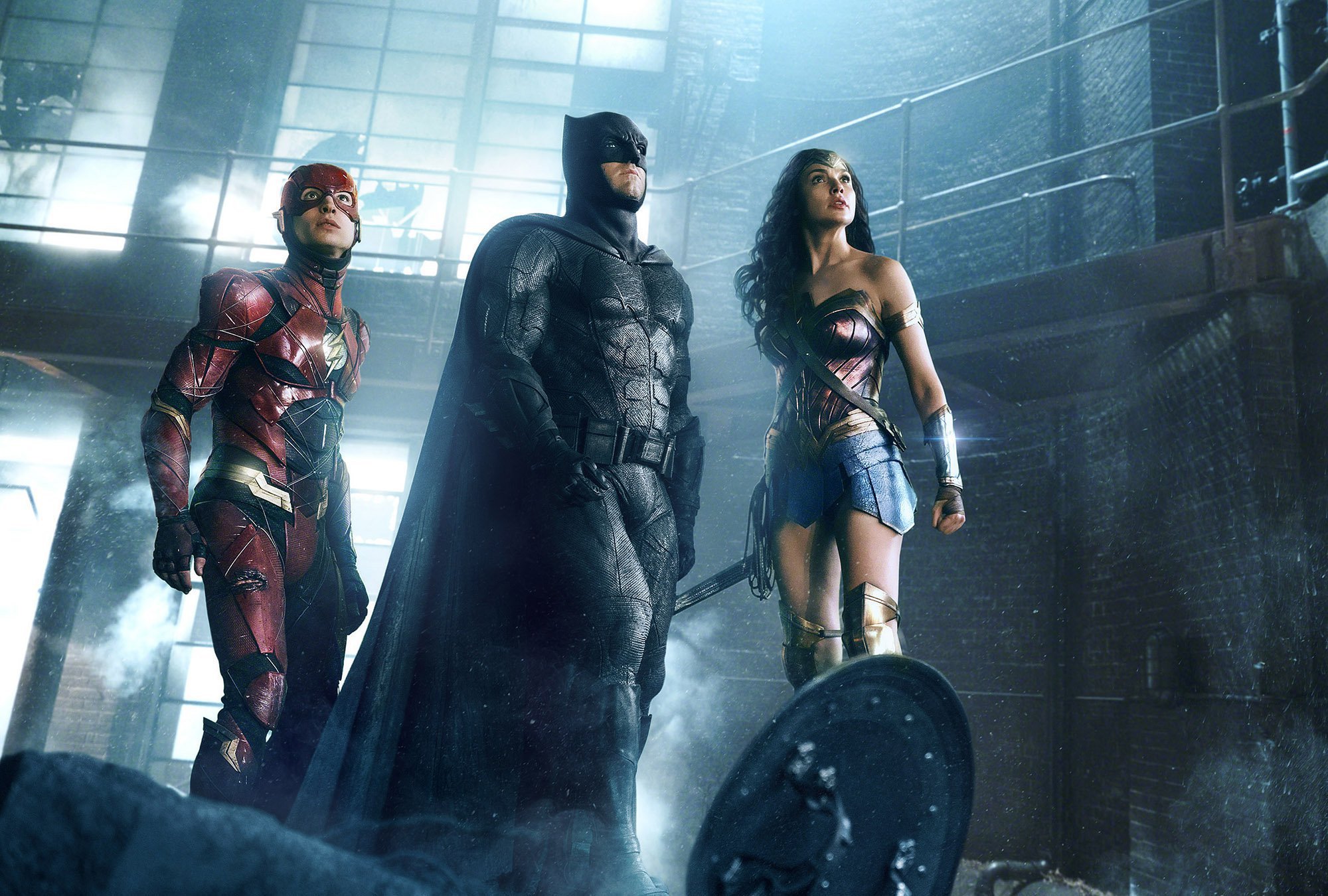 With DC finally gaining steam in the rollout of its Extended Universe, Justice League represents something of a shortcut, an attempt to make up for time lost to Marvel’s long-unchallenged prominence in the spotlight with an ensemble film filled with figures heretofore unseen in the DCEU. Fully three-fifths of the film’s main characters make their official DCEU debut here, forcing the filmmakers to run through multiple backstories as they laboriously tend to the script’s apocalyptic storyline. That director Zack Snyder manages to do this in two hours should be an achievement in a landscape that doesn’t lack for over-long superhero blockbusters. But the end result is, at best, a rushed mess that sees the poetic ambitions of Snyder’s previous DC films replaced with the banal grinding of plot gears and obligatory character exposition.

Justice League’s breakneck plot finds Batman (Ben Affleck) coming into contact with a vicious alien creature and instantly deducing that a global invasion is imminent, a conclusion that Wonder Woman (Gal Gadot) independently reaches just as quickly. The pair subsequently jump-start an initiative to recruit some para-humans they’d been monitoring and who are all reduced to their most basic attributes. The Flash, a.k.a. Barry Allen (Ezra Miller), is a dopey, socially maladjusted nerd who treats the Justice League as a way to make friends. Aquaman, a.k.a. Arthur Curry (Jason Momoa), has his smug loner act positioned as a preening foil to Batman’s brooding isolation. (Setting a new standard for superfluous shirtlessness in a superhero film, Aquaman takes pleasure, not pain, from his rugged individualism.) More interesting is Cyborg, a.k.a. Victor Stone (Ray Fisher), a young scientist and athlete who was rebuilt with machine prosthetics and digital programming after a terrible accident. Left with computational power that his human brain cannot fully comprehend, he struggles both with his complex feelings of being turned into a machine and halting ability to wield his new powers.

These and other characters, though, are never fully developed as the film’s plot lurches forward to deal with the power-mad machinations of Steppenwolf (Ciarán Hinds). Flanked by winged aliens that resemble the Chitauri from The Avengers, this would-be world dominator speaks in threatening monologues as he seeks to unite three energy cubes (hilariously called Mother Boxes in a continuation of DC’s weird maternal fixation) that are suspiciously like the tesseract from Joss Whedon’s 2012 blockbuster. In fact, the extent to which Justice League follows in the footsteps of The Avengers is remarkable. That Whedon co-wrote Justice League, and even briefly filled in as its director, only deepens the connection between the two films, with his trademark comic relief evident throughout, especially in the Flash’s awkwardness and throwaway bits like a funny gag involving Wonder Woman’s lasso of truth.

Beyond the substitution of one intellectual property for another, practically nothing about Justice League distinguishes itself from what the Marvel Cinematic Universe was doing five years ago. The film’s style, though, is very much Snyder’s own. The filmmaker continues to fixate on fitting his characters into a political framework, with material gloomily rooted in economic malaise. Images of the Kent family farm being foreclosed in Superman’s (Henry Cavill) absence speak to a kind of banal, mortal villainy more subtly at work on people than the cataclysmic horror visited upon them by super-powered beings. But Snyder again leans on his propensity for desaturated images, so much so that even scenes full of sunlight appear faded. Such dreariness is consistent with his past DC films, but it’s still difficult to square how much Justice League wants us to look up to its superheros with the way the film underlines how little they enliven the world they protect.

Even the pops of color that should enliven Justice League’s action sequences are muted by the palette’s dingy browns and grays. During the film’s climax, the superheroes’ iconic poses are bathed under so much filthy yellow-red tinting that the sequence looks as if it were set inside photographer Andres Serrano’s “Piss Christ.” As giant tendrils of energy repeatedly burst from the ground all around the Justice League, adding to the general pandemonium of flying demons and laser fire, Snyder’s camera whips around as bodies are flung to and fro by the force of super-powered strikes, resulting in blurs of motion that make it difficult to tell who’s the target of any given blow.

The best one can say about this film is that it relegates most of its carnage to a sparsely populated place instead of a dense metropolis, but that’s modest comfort in a series that delights in seeing our planet destroyed under the guise of saving it. Wonder Woman briefly cast light on DC’s bleakness with a depiction of actual moral conviction in the face of monstrous human failure, and Justice League wants its audience to invest in its heroes as symbols of resistance and strength. But when the film’s tone slides so firmly back into the murk, it’s hard not to see DC’s notion of heroism as borderline nihilistic, a battle of gods that plays out indifferently before the eyes of mortal bystanders just waiting to be annihilated for their spectatorship.

Review: Wet Woman in the Wind