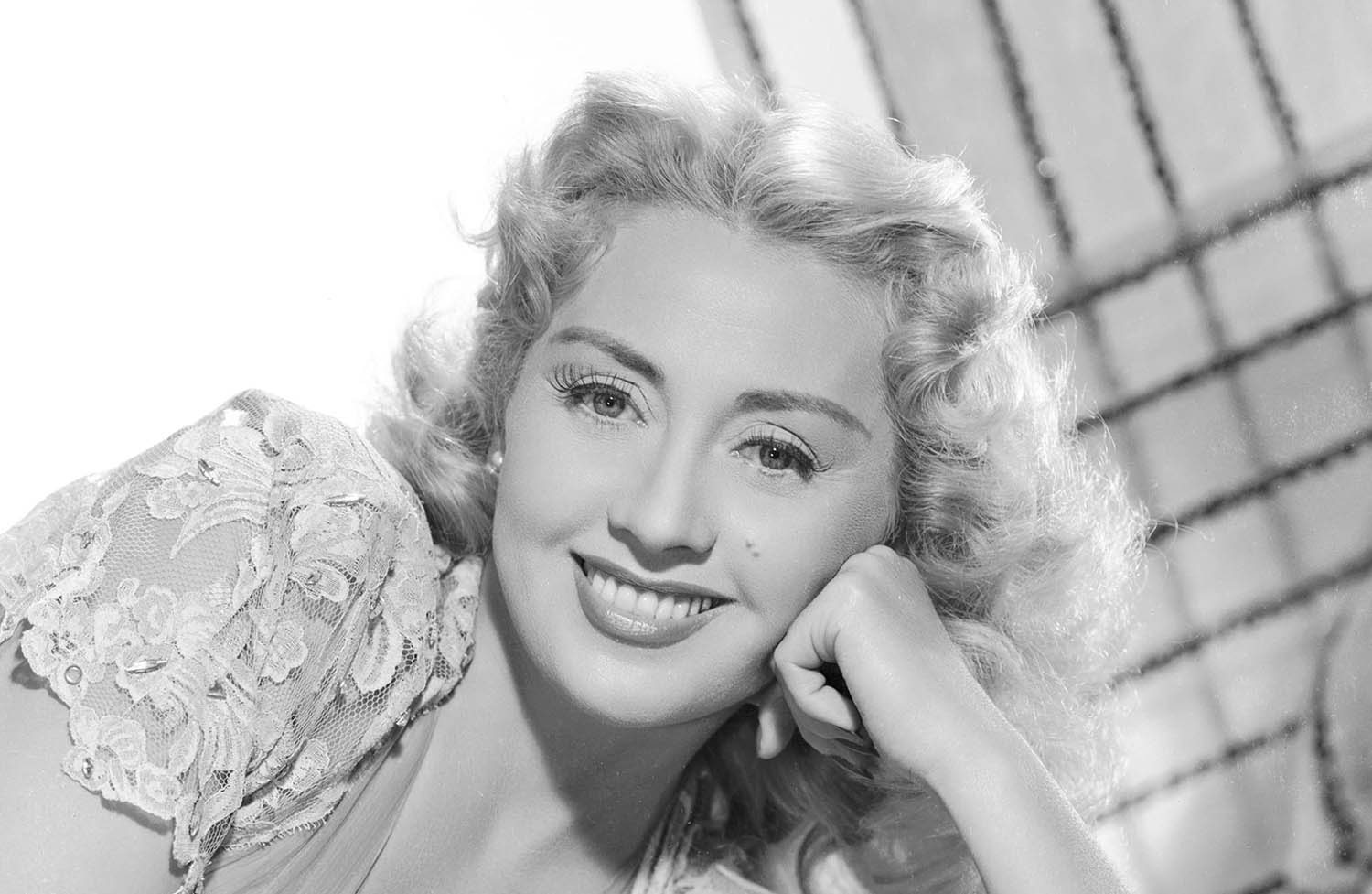 Fleshy, often blowsy and intrinsically good-humored, Joan Blondell was a Warner Brothers’ dame of all trades, where she made 54 films over a ten-year period in the thirties, seven with her best partner, James Cagney, and eight with the harder-boiled Glenda Farrell. She displayed what she cheerfully called her “big boobs” and batted her even bigger blue eyes in every variety of Warner Brothers’ picture, from comedies to gangster dramas to Busby Berkeley musicals like Footlight Parade (1933), where she memorably tells a rival girl, “As long as they’ve got sidewalks, you’ve gotta job!” In his third major biography of a worthy but nearly forgotten figure, Joan Blondell: A Life Between Takes, Matthew Kennedy makes a persuasive case for Blondell’s natural talent as an actress, and details the hard times of her life with sympathy.

Blondell was literally born in a trunk to vaudevillian parents, and was in their act as a toddler. She went to forty or fifty schools “for a week,” and her family struggled to survive as vaudeville began to slowly die. As a young woman, Blondell entered a beauty pageant and weathered a brutal attack by a man who had been promised her favors by the fellow girls in the contest; trying to escape his car, she broke her ankle. Worse was to come. While working at a library, she was viciously raped by a policeman, and kept quiet about it for most of her life. As Kennedy says, there were few resources for a rape victim in 1927, but it seems clear that Blondell refused to define herself by these horrible early experiences.

She made a hit in a play, Penny Arcade, with Cagney, and when Al Jolson bought it for movies and sold it to Warners, he insisted that Cagney and Blondell appear in the film. The title was changed to Sinner’s Holiday (1930), and when we first see a brown-haired Blondell, she is referred to as a “Tenth Avenue Cruiser.” Blondell already knows how to pop her big eyes even bigger for effect, and she’s helplessly likable, so that she can’t really play the mean side of her character (in later harridan roles, like the alcoholic aunt in Lizzie (1957), Blondell makes constant boozing and ignorance look like honest fun and good sense, respectively). Working her way up the Warners’ ladder in endless gritty programmers, Blondell developed crack comic timing as she dished out Pre-Code dialogue, often in her underwear: in William Wellman’s Other Men’s Women (1931), she tells her many admirers that she’s “APO,” which she translates as, “Ain’t puttin’ out!” Blondell played girls on the make who were somehow decent, and she became a classic wisecracking heroine for the 1930s.

What stands out most about Blondell’s style is her lack of self-consciousness; she has one scene in Three on a Match (1932) where she’s hooked up to a monstrous metal hairdressing machine in a beauty parlor. Stuck there for a while in extreme close-up, with little make-up on, Blondell offers herself to the camera with no protectiveness, as if she’s saying, “Well, kids, here I am… gee, my feet hurt, but what you gonna do? There’s a Depression on!” Opposite an impassioned Cagney in Blonde Crazy (1932), Blondell jiggles around and drives him nuts; she’s like an amiable, sexy cartoon goldfish. But there was endless drudge work for every good film like Blonde Crazy, and trouper Blondell was never a complainer, or a fighter for better parts like her fellow Warners’ inmate, Bette Davis. It was “hard, hard labor and gruesome hours,” Blondell later said. “The biggest treat was when you got time off to go to the bathroom.” Later on, Cagney stuck up for her usually wasted gifts: “She could have done much better things than the roles the studio gave her.” The proof is in a movie like Gold Diggers of 1933, where Blondell’s emotional immediacy and frank, romantic sexuality come through very intensely during her scenes with Warren William. But in the middle and late thirties, Warner Brothers threw her into nothing but formula films, knowing that she would give them her all regardless.

Blondell often emphasized that her home and family were more important to her than any acting work, but her private life was rocky. During her first marriage to cinematographer George Barnes, he insisted she have several abortions, to her increasing heartbreak. Finally, she refused to terminate her last pregnancy, and she had her first son, Norman. Blondell had her daughter Ellen with her second husband, crooner Dick Powell, and she reached the height of her popularity during her marriage to him, even though none of her films from the middle to late thirties were really first-rate. Her working conditions remained absurd: once, when Blondell was too ill in bed to come to work on I’ve Got Your Number (1934), Warners’ ordered the crew to report to her house, and the writers were told to compose a sickbed scene climax to the film! In a letter to producer Hal Wallis, Blondell let her fatigue be known: “Imagine yourself eating the same meal over and over again, accompanied by the same people and the same small talk calling for the same small answers from yourself. After about the sixth meal, you would become pretty weary, and your answers would cease to have any life to them what-so-ever.” Her plea for new material and directors fell on deaf ears.

By the mid-forties, Blondell had broken away from Warners and signed with Twentieth Century Fox, where she gave her finest performance as Aunt Sissy in Elia Kazan’s A Tree Grows in Brooklyn (1945). Blondell’s lack of inhibition in front of the camera makes her a world-class actress under Kazan’s direction, and she lavishes all her warmth and energy on this perfect Aunt, a simple, good-hearted, happy hedonist who enjoys her popularity with men and says to “try everything once.” In one scene, the illiterate Aunt Sissy asks her niece Francie (Peggy Ann Garner) to read her a newspaper article about her former husband, who she never bothered to divorce. As Aunt Sissy weighs all the information she’s hearing, Blondell offers spontaneous, pure behavioral acting, charting this woman’s gutsy evasions, all the while munching on a pickle she’s picked up off a table. During this important moment, it’s entirely and lovably in character for Aunt Sissy, and Blondell, to grab at the pleasure of munching on that tasty pickle while she mulls things over; she practically uses it as a baton to conduct the scene according to her rhythms. Towards the end, after Francie has lost her father, Aunt Sissy brings the grieving girl to an empty classroom on the day of her graduation and says, “Let it go, baby, there ain’t a soul around to hear ya, let it go.” Blondell’s Aunt Sissy is the Aunt everybody would like to have, and she remains a testament to what Blondell could do when she had a part suited to her talent.

She followed this triumph with an even better movie, Edmund Goulding’s Nightmare Alley (1947), playing a former vaudeville headliner, a decent trouper who is nonetheless ruled by her lustful appetites, the dark side of Aunt Sissy. Blondell made this movie during her third and last marriage, a full-scale disaster with the theatrical producer Mike Todd. Kennedy reports Todd’s paranoia and jealousy and his brutal rages; after one fight, Todd even poisoned Blondell’s dog. He went though most of her money, and when he was done with her he gave some of Blondell’s jewelry to his last wife, Elizabeth Taylor. Blondell gave up on men after this catastrophe, and she found work scarce in the fifties, though she managed to be hilarious, with not-too-funny material, in Frank Tashlin’s Will Success Spoil Rock Hunter? (1957). She did a lot of TV, and endless bus-and-truck theater tours, scoring a particular success as William Inge’s faded Lola in Come Back, Little Sheba, an ideal role for her.

In her last years, Blondell continued trouping even under the strain of crippling rheumatoid arthritis. Outlandish as it may seem in retrospect, she had her final hurrah in a John Cassavettes movie, Opening Night (1978), one of his large, mysterious Gena Rowlands epics. As a playwright embroiled with the alcoholic, self-destructive antics of Rowlands’ actress, Blondell wears a blue-feathered hat in most of her scenes, so that she looks like a plump bird of prey. She was understandably confused at first by Cassavettes’ improvisational methods, but once she got used to them, this old pro took her gloves off and created a steely woman dripping with polite contempt for the star who is ruining her play. “I hate actresses!” snarls sensible Blondell, as she lights a cigarette after another impossible rehearsal. Those warm blue eyes are hard in Opening Night, clouded by years of accumulated physical pain, unrewarding toil, and family difficulties. Near death, Blondell lets her entertainer’s mask drop, and the cheerful Depression girl becomes a justifiably bitter old lady whose every utterance seems to be a muttered, “Fuck you,” no matter what she is actually saying. Blondell gave pleasure all her life, and in Kennedy’s scrupulously researched book, we see what it cost her personally, so that we can admire the woman just as much as we admire the performer.