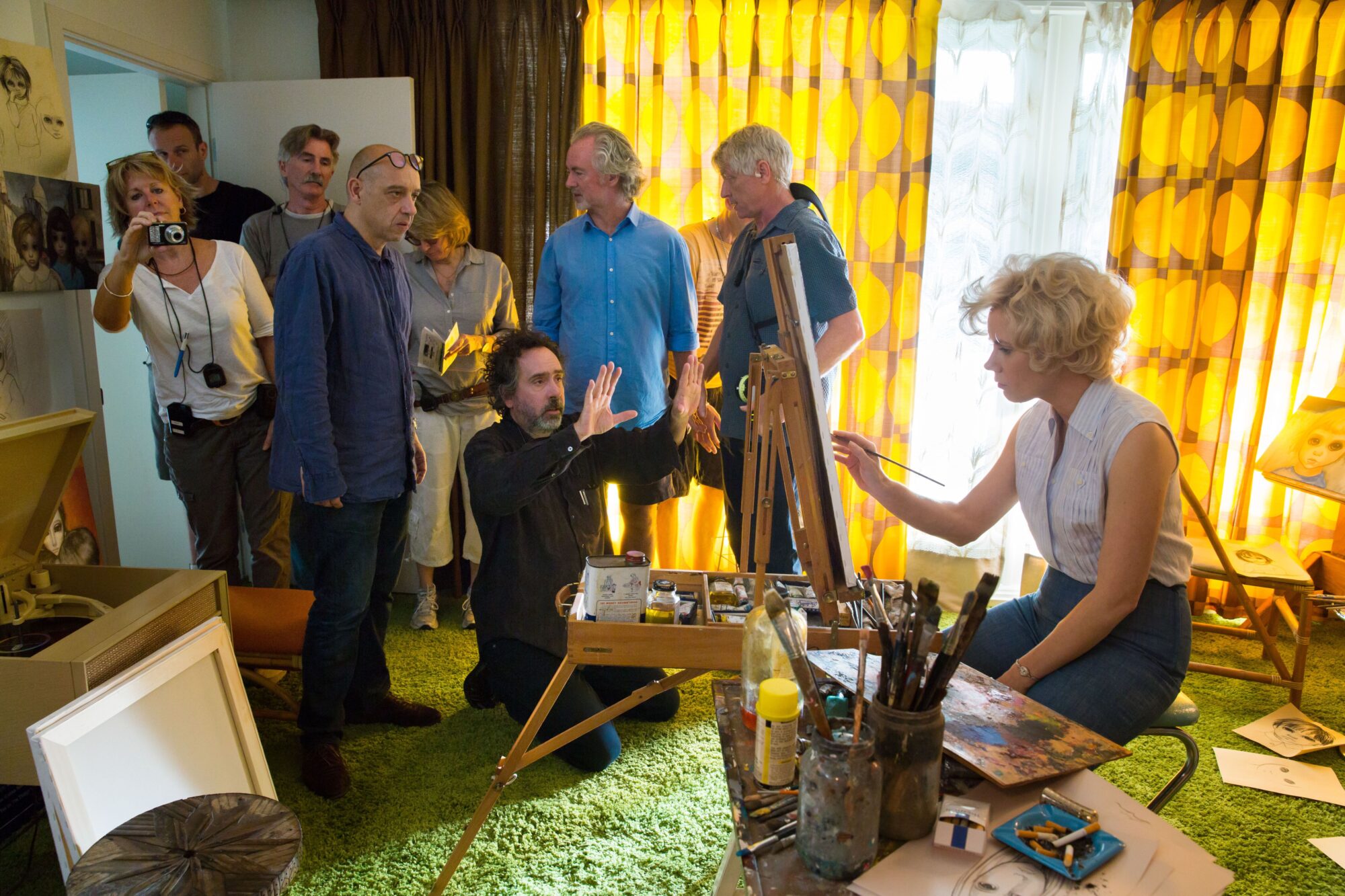 Beginning with his first feature, Pee Wee’s Big Adventure, Tim Burton’s visually inventive style has done much of the work of gothacizing his humanist narratives, often through comically exaggerated costumes and sets, matter-of-fact dollops of surrealism, and wide-eyed, well-meaning misfit protagonists. The filmmaker’s latest, Big Eyes, is about another alienated innocent marooned in a middle America that’s nowhere near as calm and comfortable as it’s pretending to be. But in most other ways, the film feels strangely un-Burtonesque. Margaret Keane, its main character, painted the lookalike portraits of sad children with enormous eyes that spread like kudzu throughout the U.S. in the 1950s and ‘60s. But the more popular her work became, the more isolated she felt, forced as she was to keep a secret that had been cooked up by her husband, who wanted the world to think he was the artist behind her “big eyes” paintings. I spoke with Burton last week about what Keane’s experience has to say about the suburban American dream of the Cold War era and why he opted for a more subdued visual approach in telling her story.

I guess you must like Margaret Keane’s paintings, since you own a couple of them.

Well, yeah. But “like” is a funny word. I grew up with them. They were very present in the culture. I was more fascinated by them. Being a pop-culture enthusiast, I found them actually quite disturbing. These children, there was something kind of creepy about them. I remember, as a child, thinking, “Why do you have a picture of a crying child in your living room?”

So you liked them the way you liked horror movies?

Yeah. And also, growing up in that era in the late ‘50s, early ‘60s, the nuclear family was my family: two parents, some kids, everything’s perfect. And there’s a subconscious power in the sense that here’s these two people, completely dysfunctional relationship, creating these sort of weird mutant children. It’s kind of symbolic of where that weird American dream was really at. Or going.

What did you commission from Margaret Keane?

I had one done with Helena [Bonham Carter] and our son. It was so great. And then she did my kids’ eyes. She did my eye too—a charcoal thing of my eye. Given the slightly not-realistic style that she has, it was incredible how she captured each of the kids’ and my eye, and how accurate it was. I knew there was some power to her work, but to see that specific thing made it like…wow! She’s good, you know? She knows how to capture somebody in a not completely realistic but emotionally realistic way.

I’m not really surprised you’re drawn to her work, because Johnny Depp in Edward Scissorhands and Winona Ryder in Beetlejuice were kind of goth Keane kids, don’t you think?

I’ve always been attracted to actors who open their eyes. People like Johnny or Winona or Eva Green, people who don’t have to say anything, like a silent-movie actor. I love that. Because film, obviously, is a visual medium. It’s great to see actors, like Michael Keaton in Beetlejuice, doing all kinds of stuff, but also at the same time, Michael Keaton doing Batman is just eyes. All he has to do is just look at you, not say anything. I find that very, very powerful, and that’s why I’ve always been attracted to actors that have that capability, or persona.

The screenwriters, Scott Alexander and Larry Karaszewski, also wrote Ed Wood. How did you come to work with them on this movie?

Well, it was weird because it was kind of like we were in parallel universes. Obviously, I’d worked with them on Ed Wood, but I didn’t know that they were writing a script based on this. Separately, a friend of mine had told me about the Keanes in about the mid 1990s. So I was in San Francisco, I met her and commissioned a painting, and a couple years later they sent me the script. As soon as I saw it, knowing their love of real but slightly unbelievable characters, I knew it was right up their street. I got interested as a producer.

Did you have any particular directors in mind?

No, no. They wanted to do it, Scott and Larry, and I was going to help them out. But as these things do, it was taking forever, and I’d done a couple of big-budget films and I just felt, after that, I’d love to do something low-budget without a lot of effects and stuff.

There really aren’t many special visual effects in Big Eyes. Though you do make the Keanes’ house look awfully dark and forbidding for a glass-walled California dream house, and there’s a sequence where Margaret looks around and imagines everyone with huge eyes, like the ones in her paintings. Did you think her paintings were so weird you didn’t want to overshadow them with your own visuals?

Well, yeah, I think so. And also the story. Like, for instance, the courtroom scene. Some people may think it’s over the top, but we actually toned it down because the story itself is so out there. The judge wanted to tape his [Walter Keane’s] mouth shut. So, especially given all the other stuff I’d done, it was nice to keep it simple and let the strangeness of the story be the thing.

You don’t have any of your usual actor collaborators in this one.

No. I love working with Johnny. Everybody that I’ve worked with a few times, I loved working with them and I’d love to work with them again. But it’s also nice to mix it up, you know? It’s like a chemistry set. I had a little bit of the crew that I’d worked with, but a whole lot of new crew, and all the actors I’d never worked with. It was great to get to meet and work with Amy [Adams] and Christoph [Waltz] and people like Terence Stamp. I’ve admired every person that I got to work with: Danny Huston, Jason [Schwartzman], Krysten [Ritter]. So it was fun. Because I’m not a social person, it’s a great way to meet people.

I’ve always imagined, when directors like you often work with the same people that it must be at least partly a way to sort of protect yourself from the craziness of the business. You’ve got so much negativity coming at you, and so many people trying to blow smoke up your ass.

Yeah. Yeah. I have trouble even being complimented on things. I don’t like “yes” people. And making a film, you’re right; all the business side of it is a bit of a nightmare. But when you’re making the film, it’s like your weird family. That’s just really special. That’s what I always loved about Fellini’s films: You see the weird joy of the weird filmmaking family and the abstract craziness that goes along with it, and there’s something about it that’s quite beautiful.

You started as a painter, like Margaret. What is it about making movies that makes all that craziness and effort worthwhile for you?

Well, it’s fun to work with other artists. You’re dealing with a billion people, and there’s a great energy. Early in my career, I was lucky to work with a lot of people who were from comedy improv, people like Paul Reubens and Catherine O’Hara and Michael Keaton. It was quite eye-opening for me in terms of learning a different way of dealing with things.

And working with other people lets you extend your vision in ways you could never do on your own. Like the collaborating you do with Danny Elfman on the music for your movies.

Danny and I just connected. I used to go see his band in clubs, even before I was making movies, and I thought, “This music sounds very filmic to me.” That’s why I asked him to do Pee Wee’s Big Adventure. I remember on set, it was my first film and his first film, we were kind of looking at each other and saying, “It’s amazing. We’re two people who have absolutely no idea what we’re doing. But we’re doing it!”

Review: Into the Woods