It was in 2006, right around the release of that tired remake of Kairo starring Vernonica Mars, that I found Guinea Pig. Released into the massive Japanese straight-to-video market in 1985, the series’s first release—created and directed by Satoru Ogura—is entitled 01: The Devil’s Experiment. It borrows the “found footage” motif perfected by Cannibal Holocaust and later watered down in The Blair Witch Project and Cloverfield.

The first thing we see: scrolling text announcing (as per the film’s original marketing) that this tape was found with no markings except for the title on the box: “Guinea Pig.” Then: a series of shots in a wooded area before we happen upon a woman hanging in a net. The scene fades to black, only to have the Japanese character for “Slap” appear in the lower right hand corner. These title cards bluntly explain the different “experiments” that will take place: “kick”, “boil”, “spin”—no, they actually just spin her around in a circle until she vomits—“worms”, “cut” and, finally, “pierce.” I find it hard to watch, personally. The entire thing looks bleached out, like a bad VHS transfer. The sunglasses look hokey. And you can tell a few times that the Tough Guy hitting the victim misses her cheek completely, doing nothing more than smacking leather glove against leather glove.

Guinea Pig is minimal budget filmmaking with incredible effects—a series akin, in a way, to the Hipster Horror resurgence currently in effect, and which plays on a pervasive social taboo: the snuff film. 02: Flower of Heaven and Earth does just that. Directed by Hideshi Hino—who would also helm Mermaid in a Manhole—the film begins with a pasty, gnarled man in Samurai garb abducting a woman. He waxes poetic to the unknown cameraman about his reasoning behind doing what he’s about to do. In the opening, we learn this was supposedly sent to an artist as a “thank you” for all of his work. (As with Experiment, when released it was only as a blank VHS tape with the term “Za GiniiPiggu” written in Kanji on the packaging.)

The Samurai proceeds to cut through his victim’s clothes, then takes her hands, arms, feet and entrails from her—all on camera—before, in a slow-motion sequence, chopping her head off. When Charlie Sheen—of all the people—saw it, he was convinced he had just watched a snuff film. This led to a minor situation mirroring Cannibal Holocaust where the F.B.I. calmly told Sheen that Flower of Heaven and Earth was only a movie and not to worry. Unfortunately, Tsutomu Miyazaki didn’t get the message. The so-called “Otaku Killer,” Miyazaki copied Flower of Heaven and Earth down to a scene for one of his murders. Upon finding out that he had been inspired by this, the Tokyo government railed against those involved with the project.

The third film of the franchise—released prior to Miyazaki’s killing spree—left the snuff concept behind for a more surreal dark comedy. 03: He Never Dies follows a man who is driven to suicide by taunts from both his girlfriend and the man she was cheating with. He runs a knife across his wrist, giddy that he’s going through with it, only to stare in shock as the blood stops. He prods his finger into the wound and nothing else happens. This leads to a series of brutal acts: chopping off his own hand, slitting his own throat, stabbing himself with a protractor and even disemboweling himself and giggling while he throws his intestines around the room.

1986 and 1988 would see the release of, respectively, Making of Guinea Pig and 04: Mermaid in a Manhole. The making of doc provides the background to Flower of Heaven and Earth, and is strangely compelling in a lo-fi way. It really does show how far latex, setting and no budget can strengthen an otherwise cliché concept. Mermaid is a return to the perverse as a man in a struggling marriage finds a Mermaid he befriended as a child in the sewer. He takes her home, but notices she is covered with sores from what we think is the pollution she was covered in. He becomes so entranced by the scene that he begins painting her portrait using her own various fluids as the source. She continues to decompose, only leading to his own glee at completing the work. Of course, it takes a very Rod Sterling twist toward the end when you begin to question just where his wife is.

05: Android of Notre Dame brings nothing new to the series, aside from a cackling midget and the comedic use of a man being cut down at the knees. But 1990’s 06: Devil Doctor Woman intentionally comes off as a horror-comedy, almost as if Peter Jackson had decided to set Bad Taste II in Japan. The titular character (played by a drag queen named Peter—no, seriously) would introduce each “Karte” about the various, strange cases (s)he ran into: a family whose genetic trait means their brains will boil until they explode (so the good Doctor does everything she can to piss them off); a man who sweats blood (the Doctor sends him to a sauna); and—a truly odd scene—a Yakuza with a human growth carbuncle who the Doctor, deeming him ready for show business, has dance in the streets, shaking the latex face around his stomach. After this entry, an order was (supposedly) passed by the Japanese government that no films could ever again be titled Guinea Pig for fear of inspiring copycat Miyazakis. There was technically a seventh film, but it is merely a selection of “Greatest Cuts” from the entire series.

Guinea Pig is clearly one of the great examples of modern, splatter horror—it even manages to out-torture porn Eli Roth, so much so that I’m always surprised no one ever brings it up in comparison. The series is currently available on DVD in a box set from Unearthed Films. The quality varies from film to film, mainly due to the transfers from VHS. The shock-style of the covers take away from the original nondescript packaging. I’ve only run into one copy of the original Guinea Pig on VHS, but later found out it was transfered and not a “true” copy (here’s looking at you old Kim’s on Bleecker Street!)

While Asian films have often been marketed as “EXTREME” (cough, Tartan) or “ADULT ANIMATION” (Manga Entertainment), it remains a source of much amusement to me that such low-brow, straight-to-video films would rival and out-perform the Black Hair Ghost Girl genre. Unfortunately, many of the Guinea Pig films don’t really stand the test of time: Devil Doctor Woman resembles an episode of the SFX-horror series Monsters, but with some very questionable non sequitur jokes that would be more at home in the awkward comedy of Tim and Eric. If you’re a genre buff or just tired of your friends preaching about how great J-Horror is, throw one of these films at them. They’re a welcome respite from people who are still trying to ape a “J-Horror” moniker, even those that are doing so just for some weird Japanophile fantasy film.

On a side note, Matt Alt penned a brief look at how The Super Dimension Fortress Macross (a.k.a. the first third of the Robotech series released to U.S. audiences) is not only a shonen story, but one that deals with the concepts of war and commercialism as compared with the theatrical re-telling, Macross: Do You Remember Love?. From Neojapnisme:

“So far, Macross sounds like any of a dozen anime plots. (Thanks to its origins as a satire of the genre, Macross is largely a pastiche of Japanese sci-fi archetypes.) The twist is the portrayal of airheaded ’80s Japanese consumer culture prospering aboard the ship. Macross’ pop-cultural proselytizing is aggressive enough in the television series, but it’s played up to a delirious degree in the 1984 theatrical version Macross: Do You Remember Love. The film opens with a slow montage of life on the streets of Macross City, whose inhabitants apparently don’t let the fact that they’re in the midst of an intergalactic war get in the way of some good shopping. Despite being trapped in the belly of an alien space-fortress that’s stranded out somewhere beyond the orbit of Saturn, the streets teem with vending machines dispensing soft drinks, a doppelganger of Harajuku’s teenage-mecca Takeshita Doori complete with fast-food joints and “jumbotron” TVs advertising the latest fashions. There’s even a multi-lane highway (to where isn’t ever explained) and an outdoor display of next season’s car models. Who exactly is supplying all of these new products isn’t ever asked, let alone answered. The presence of a thriving consumer economy—even in this most bizarre of circumstances—is treated as obvious, a given, unquestioned by creator and viewer alike.”

I do think Matt has a valid point—even if this conclusion is reached way too quickly with much presumption as regards the audience. But as a commenter named “M-Bone” sums up:

“…There is also the hint that consumerism is not a solution – some of the Zentradi, in the end, cannot give up war. They find their culture IN war. This can be read as a fascinating critique of the lingering presence of rightwing kooks in Japan, I think, complete with a final glorious(ly stupid) kamikaze attack.

What you describe IS in the series (and especially in the film) but it is not ALL that is there.”

The World War II comparison can be found throughout most anime as it is, but Alt is definitely onto something.

As for a video this week, I tried to get something from Guinea Pig, but no luck. So, instead, here’s the trailer to Kwaidan: 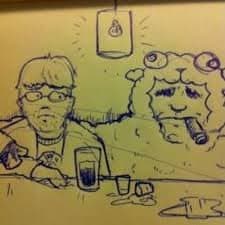 5 for the Day: Declarations of Love