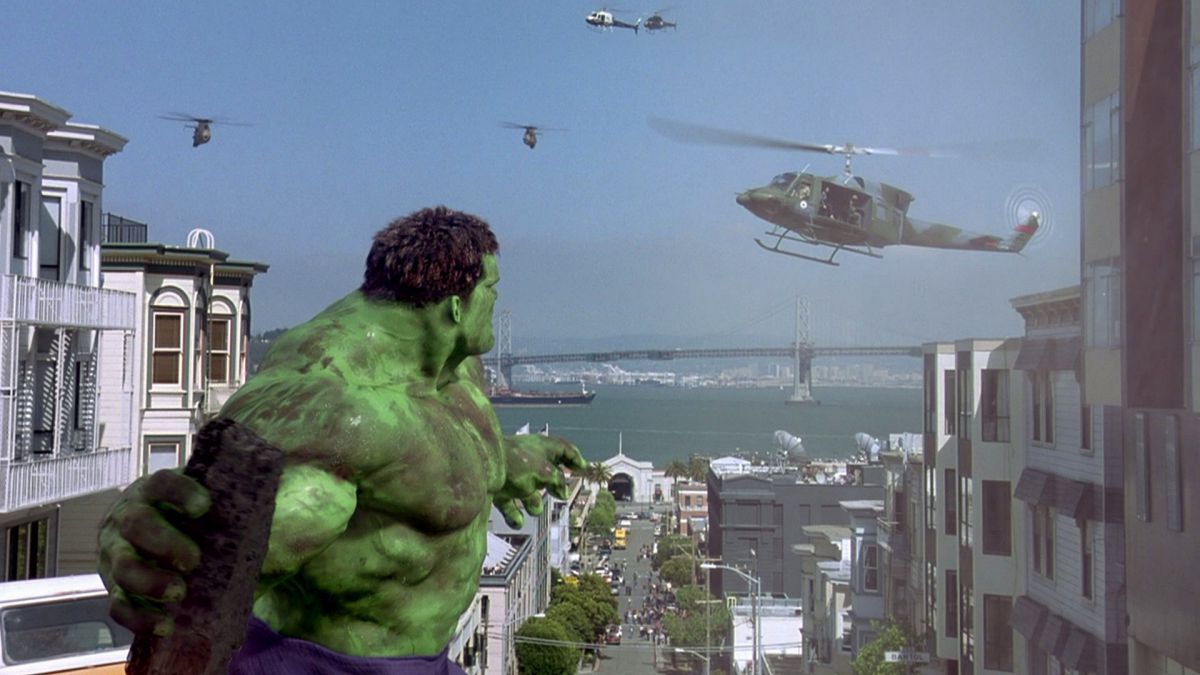 Marvel and M. Night Shyamalan attempt to atone for their purported sins with The Incredible Hulk and The Happening, respectively—both unfortunate attempts to pander to popular taste/demand with something of an artistically cleft void in place of the bleeding, if perhaps misguided, hearts of their predecessors. More interesting than the fact that these two ill-fated apologies made their way into theaters on the same weekend is the fact that, as far as “corrections” go, neither was much necessary in the first place. For what it’s worth as regards The Incredible Hulk, I’ll restate the fact that I’ve never been one to hop on the anti-sequel/anti-remake bandwagon (I’d rather see more double-bills of films like Capote and Infamous than “original” films lacking in soul or depth), and despite his many offenses (most of them relative in my book), nor will I take part in the seemingly mandatory pastime of kicking M. Night Shyamalan when he’s down. Both films deserve to exist and should be considered for exactly what they are unto themselves. And both are prime examples of self-imposed limitations bearing little fruit, films stunted by their shameless attempts to appeal to as wide a demographic as possible.

More pronounced in this department is The Incredible Hulk, which doesn’t aim merely to mask over the existence of Ang Lee’s audacious work, but to be as completely unlike it in every way imaginable. It illustrates the difference between a good, mindless summer film (not necessarily a bad thing) and one that’s outright stupid. Populist concerns dictate that I review The Incredible Hulk based on the needs of the Average Joe, so here goes: It was loud and noisy and lots of stuff blows up real good, and unless you’re doped up on Nyquil going in, it’s very unlikely you’ll find yourself taking a $10 nap. That was easy. Now here’s the hard, more cinematically attuned question: did it nurture my soul? That the viewing experience left in me a sense of sinking, turgid waste is answer enough. As far as summer blockbusters go, The Incredible Hulk is a skilled enough piece of hackwork, with enough flair that I’m still willing to check out the director’s previous Transporter films for signs of auteurist talent. Conceptually, it’s a dud, treating Bruce Banner’s (a meekly enthused Edward Norton) internal plague like the latest sound byte on E!. Sound and fury signifying nothing, indeed.

In doing a complete 180 from 2003’s Hulk, this new film proves downright frightened not only of style-as-substance aesthetics (the only visual flair here being an improved take on the Greengrassian montage during the opening chase and closing battle sequences), but of more meat-and-potato components such as character development (tangible justifications for behavior and pathos, please) and strength of narrative. Seemingly under the impression that the more tanks blown up, the less focus on plot-based causes and effects required, Incredible Hulk panders with genuinely LCD cinema, making the juvenilia of Transformers look altogether deep by comparison. General audiences will likely fall head over heels for this reboot, and though I’d be lying if I said the film were entirely without merit, there’s something depressing about a weapons-based spectacle without an emotive pulse. Zak Penn’s script—a patchwork of moldy declarations of love and fear, motivation-deprived villains and stillborn exposition—reeks of studio nip-and-tuck, as if calculating the amount of down time allowed between each battle sequence and clipped so as to allow for as many showings per day as possible.

That there’s something almost giddy in the air when the transmogrified Edward Norton is finally allowed to declare “Hulk… SMASH!!!!”, only emphasizes the emptiness surrounding it. That Norton, Tim Roth, William Hurt and Liv Tyler (as beautiful as ever and the best piece of eye candy in the film by a mile) are all serviceable in their parts speaks to the slipshod nature of the film as a whole. The Incredible Hulk is many things—a tie-in to the upcoming Avengers film (via a last-minute cameo by Robert Downey Jr.’s Tony Stark, likely added in post-production), maybe even a 2-hour video-game advertisement—but good entertainment it is not. A flash in the pan would have been preferable.

Coming to us from somewhat loftier slopes, then, is The Happening. Already in need of a second viewing, it is a work of roving minimalism, the camera almost completely free from overactive movement, enamored by pure scenery as it observes from casual, happenstance perspectives a tragedy that unfolds with frighteningly quotidian simplicity. It is Shyamalan’s latest bedtime story, a simple (not necessarily simplistic) film meant to impart a basic virtue or belief, here implicitly reflecting our social and political moment as much as did Lady in the Water’s tale of communal empowerment. Alas, whereas the director’s previous offering continues to strike me as an artistic confession and introspection as daring and intimate (if not nearly as profound) as Bob Fosse’s All That Jazz, this new film is only half good cinema, seemingly the result of its maker’s stunted belief/determination in both himself and his audience. The Happening’s plot is a bountiful source for readings and interpretations, or rather, it might have been, had the film’s talking heads not continually harped on them as if we were too braindead to get it ourselves.

In an effort to return to the more narratively (if not thematically) straightforward virtues of The Sixth Sense and Signs, The Happening disregards its own implicitly non-dramatic arc, throwing forced revelations, dramatic structure, and thematic conclusions to the audience like a frightened man would bones to a dog. Beginning in Central Park, New York, scores of northeast American cities are being plagued by an unseen, inexplicable force, the none too subtle symptom being entire crowds of people committing suicide in almost simultaneous succession. Spreading from urban to rural settings, it is a force never explained outright, much like Cloverfield in that the characters have no point of reference by which to know more than the immediate violence surrounding them; ditto the scientists’ inability to draw any conclusions from the effects without any practical means of examining their causes.

Eventually, our protagonists provide an educated theory (spoilers ahoy): that plant life, in defense of the Earth itself, could be releasing poisonous toxins when sensing the amassing presence of humans. Audiences were scoffing at the premise at my showing, and though I think it unfair to dismiss the purported seriousness of such a sci-fi scenario (the likes of which were practically routine amongst the 50s output of the genre, from the leafy villains of Invasion of the Body Snatchers to the more violent herbs from The Day of the Triffids), Shyamalan does himself a disservice in his attempts to portray this creeping death as if it were some kind of malevolent bogeyman, literalizing the suggested and, in doing so, stripping it of both primal cinematic thrust and deeper thematic/political significance. The Happening’s particulars are not devoid of those emotionally revealing, personal frissons that made Lady in the Water such a therapeutic exercise (for both artist and audience), but Shyamalan seems to be going against his instincts in presenting them here, forgoing the awkward but honest for self-conscious attempts at normality, thus rendering said awkwardness doubly more so for its faux attempts at concealment. The killer plants only seem silly when they’re shot like Jason Voorhees, and I found myself unable to entirely condemn the hecklers in my audience for their derogatory responses during these sequences.

In many way’s Shyamalan’s take on An Inconvenient Truth by way of Romero, The Happening remains tantalizing in its details even as it routinely wanders into more preschool-laden territory. So deliberate and uneasy are Shyamalan’s visual signifiers that, even at its most embarrassingly overreaching (a moment in which Marky Mark—attempting a last-minute, slow-motion leap to the rescue—is legitimately awful), the entirety remains genuinely arresting, almost dreamlike. Aided in no small part by Shyamalan’s defiant use of characterization (death here stemming not from narrative demands, but the brutal indifference of the natural world), the uneasiness of The Happening’s mise-en-scène serves to challenge our perspectives and expectations in a fascinating push-and-pull between audience participation and thwarted artistic instinct. Though the film’s crowning moment is dialogue reliant—a conscious bit of self-parody that involves Mark Wahlberg’s Elliot Moore taking an ultimately unnecessary precautionary measure (in perhaps the funniest moment in cinema since Mastodon instructed Aqua Teen Hunger Force audiences to take “the seed outside”)—the strengths apparent here beckon to some of the great directors of silent cinema. After another viewing, I just may nominate Shyamalan as helmer of my own theoretical remake of Carl Theodor Dreyer’s Vampyr.