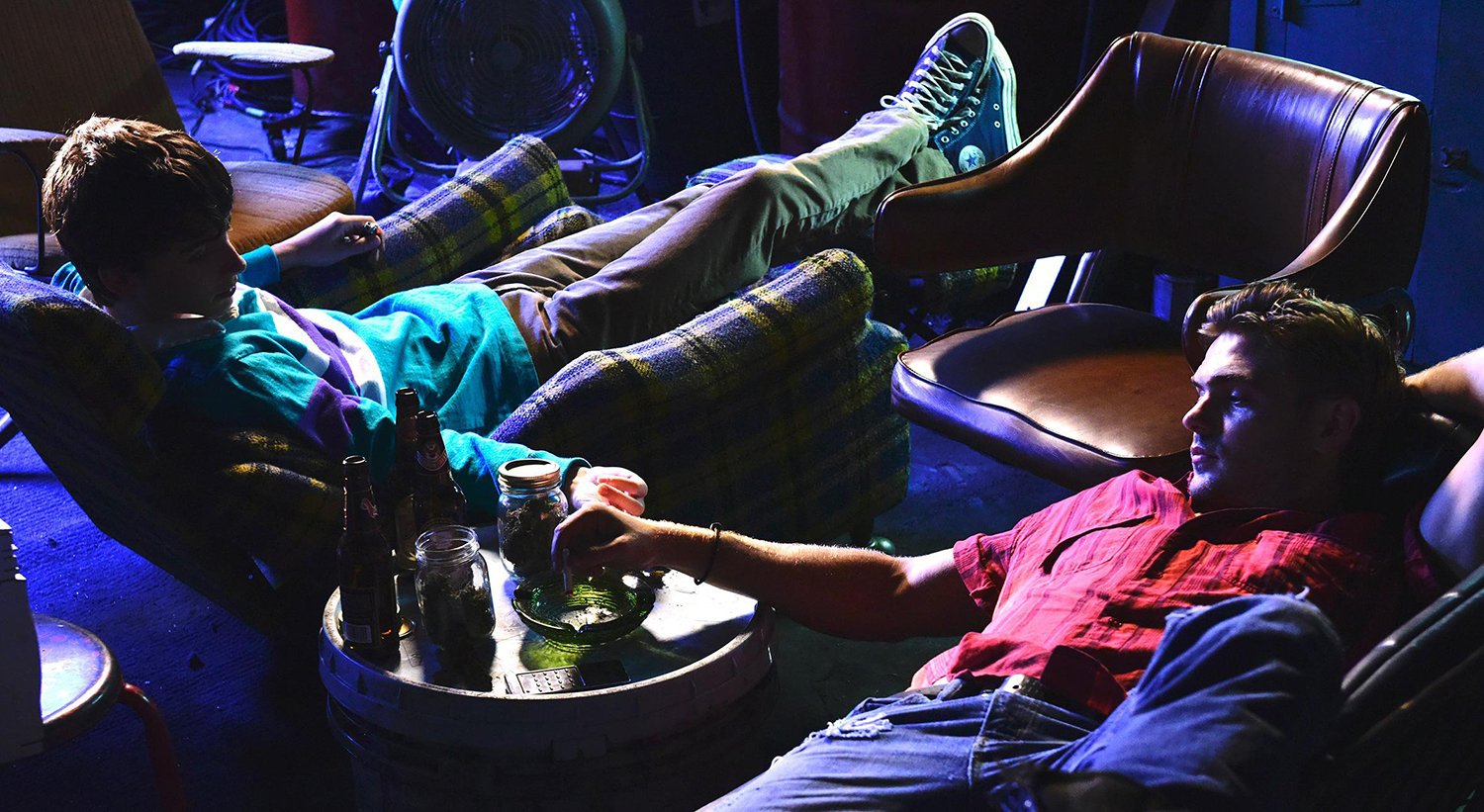 In Hot Summer Nights, more is less—much, much less. In one early scene, 18-year-old Daniel (Timothée Chalamet) takes his first hit of weed, triggering an on-screen mashup of mid-20th-century educational films, cartoons, and nuclear bomb tests. By the time we cut back to Daniel, he’s collapsing to the floor in ecstasy. A little cinematic dynamism can go a long way—and too much can be exhausting and grating. Take our introduction to the object of Daniel’s summer bromance, Hunter Strawberry (Alex Roe): a moment that’s followed by direct-to-camera interviews with various pubescent characters who testify to the dude’s legend and who we never see again. No explanation is offered for this mystifying documentary-style device, which doesn’t stand up to the lightest questioning as to who’s doing the interviewing and why.

Following the death of his beloved father, Daniel goes to spend the summer before college with his Aunt Barb (Rebecca Koon) in Hyannis, Massachusetts. He and Hunter meet cute when the latter, trailed by a cop, rushes into the gas station where Daniel works as a cashier, asking the teen to hide some marijuana. Hunter, who’s also mourning a dead parent, has a tidy business selling dime bags to preppie vacationers. Daniel encourages him to think bigger, and soon the two are best buds, moving pounds of the stuff. It’s your standard kingpin origin story, just set in a predominantly white beach town.

Hot Summer Nights, according to a title card, is “a (mostly) true story.” Writer-director Elijah Bynum has said the film is based on the experiences of some people he knew in college, through he’s set it in a different place and time (Bynum was four years old in 1991, when this story takes place). The script, though, feels based not on real life but on the worst coming-of-age movies. The hottest girl in town, McKayla (Maika Monroe), just climbs into Daniel’s car one evening, escaping a bad date at the drive-in. Turns out the girl is Hunter’s estranged sister, and each warns Daniel to stay away from the other.

The film’s driving conflict is how Daniel lies to both Hunter and McKayla, pursuing romance with the sister and illicit wealth with the brother. Eventually, of course, these lies comes crashing down, and in one of the most overwrought examples of ascribing human emotions to the weather that the movies have ever seen, the plot climaxes as Hurricane Bob comes to decimate Cape Cod while various factors combine to destroy Daniel’s happy summer. The first time we see Daniel cry, it’s raining—really hard.

Chalamet sports a goofy affability as Daniel, obscuring the character’s angst behind a stoner’s blithe façade, though Bynum often wastes the actor’s appeal in scenes of clichéd awkwardness, like wallflowering at a party, where Daniel’s drink gets spilled on him. In the end, Hot Summer Nights can’t get very far on Chalamet’s likability alone. (A brief appearance by the magnetic Emory Cohen, as a drug supplier, also proves inadequate.)

Hot Summer Nights is also stalled by its narration, almost as endless as the stream of cool tunes on the soundtrack. The film ends with the narrator—a 13-year-old character (voiced by Shane Epstein Petrullo) with no role in the drama on screen—talking about how the real tragedy of the story is that McKayla soon left town, disappointing so many young boys who thought she was hot. It’s an objectifying, outrageously sexist punctuation mark that turns an already unlikable film into an odious one. Like the teenagers at its center, Hot Summer Nights tries too hard to look cooler than it ever could be.

Review: Far from the Tree