It’s typical of Austrian documentarian Nikolaus Geyrhalter’s clarity of vision that the absence that structures his latest work is so painfully obvious that on paper it could sound almost banal. Homo Sapiens does nothing more than visit various crumbling signifiers of our civilization and ensures that humans never enter its frames—one simple omission that nonetheless carries almost limitless consequence. As the filmmaker places the viewer in front of vista upon vista of dilapidation and decay, certainty after certainty ebbs away. It makes no difference that each location is actually plucked from real life; the standard categories of time, geography, human accomplishment, and cinema are thrown off balance all the same.

The simplicity of the film’s underlying concept is echoed by its equally unadorned framework: an ongoing sequence of sustained, static wide shots presented without commentary or direct markers of place that’s only split into nominal chapters by brief stretches of black screen. The locations shown are entirely devoid of human life, in varying states of disrepair, and nearly all communal in nature: auditoria, train stations, car parks, shopping centers, industrial compounds, housing estates, churches, streets, offices, hospitals, schools. Some of these locations appear over a series of shots and others appear just once, while the chapter structure groups them according to various thematic commonalities—the institutional, the recreational, the work-related, the archival—that are kept deliberately loose.

But soon these categories begin to break down anyway. When emptied of people and robbed of key features, a cathedral resembles a concert hall, and a factory facility a mall, the suggestion being that human distinctions only apply as long as humans are there to maintain them and that the gradations between banality and significance depend on their presence. As the flow of hollowed-out images continues unabated, the emptiness they exude grows so acute that it condenses into an urge to interpret, as if these disquieting vistas can only be conceived of as the aftermath of some unknown future catastrophe rather than carefully selected facets of the present. Yet the chain of interpretation doesn’t stop there, as trying to get a grasp on Geyrhalter’s conceptual apocalypse only throws up more questions along the way.

If Homo Sapiens is a documentary of some post-apocalyptic reality, then it must be a longitudinal one, as each location is in a differing state of decay; while one slightly overgrown car park could almost still be in use, other structures are so far gone that their original function is barely recognizable. But if this is indeed the case, who is marking out the necessary temporal intervals and who’s behind the camera? Geyrhalter’s gaze may be as unflinching as that of a surveillance camera, but the latter certainly doesn’t possess the same compositional skill. The vision he forges doesn’t just call forth imaginary time and camerawork, but also imaginary geography, as locations whose architecture variously suggests Fukushima and places in North America or the former Soviet Union, to name just a few, are fused into one all-enveloping whole. This real yet illusory world is evoked so seamlessly that it also feels just one step away from pure cinematic fiction, like an immaculately constructed film set always seen at the moment just before the astronaut or the zombie shuffles into view.

Yet none of these interpretational mind games would even be possible if Geyrhalter’s images didn’t create the concentrated atmosphere required to sustain them. Each location is rendered as a tableau of breathtaking precision, augmented by a sound design so immersive you can feel each of the spaces extending outward way beyond the frame. Even if every image shares the same essential lack, this doesn’t mean that they’re necessarily similar, as Geyrhalter is continually able to find new, equally ravishing permutations of emptiness: a vast hall of metal containers clanking together as they sway from the ceiling, a pile of automobile scrap towering over a pool of perfect turquoise, boats of rusted steel suspended in a verdant canopy. And for all its severity, this near-relentless beauty ultimately manages to generate a perverse sense of hope, even when there are bones lying on the ground. For how bad can all these tiny cataclysms be if their result is such endless grace?

Review: Earth Is Stuck Between Pragmatic Pedagogy and Lyrical Critique 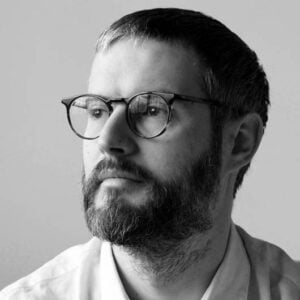 Review: Into the Forest