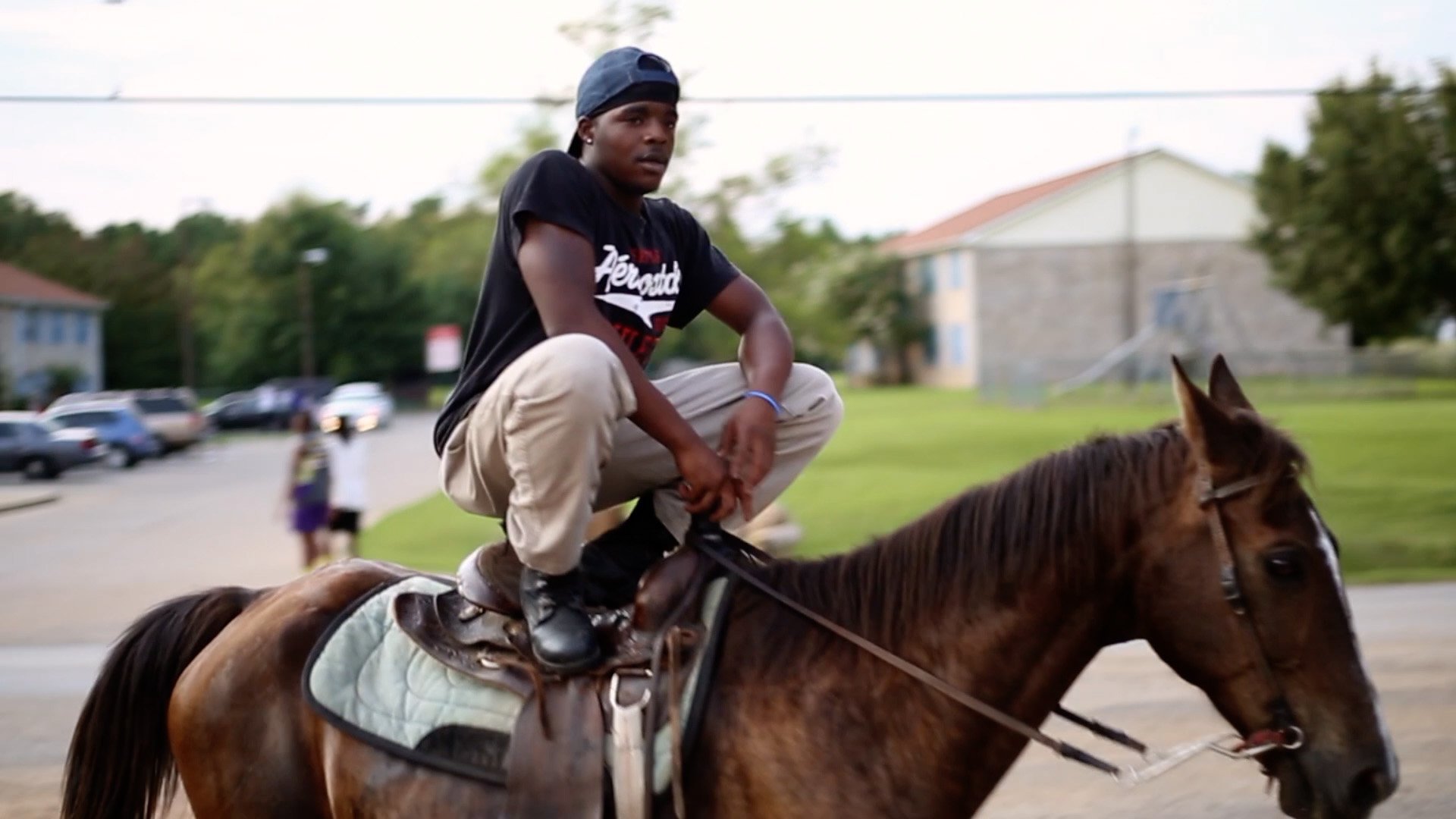 The most intricate scene in RaMell Ross’s documentary Hale County This Morning, This Evening is a single take captured inside a locker room, presumably before a college basketball game. Apart from a large sofa set in front of some lockers, the setting is familiar, but the composition lacks a dramatic or visual point of focus. A dozen or so men are scattered around the frame, mentally preparing for a game in varying, totally anodyne ways. A few roughhouse, one jumps up and down, another seems to run in place while sitting down with a strange intensity, and one just stares at his cellphone, cocooned from the mundane choreography transpiring around him.

The shot lasts a few minutes, not quite long enough for the audience to glean some overriding point from the moment, but just enough for us to realize that we’ve gradually observed a half dozen or so fascinating narratives in miniature. It’s a lovely summation of a short but resonant film, a durational project that circles two aspiring basketball players living in a small county in western Alabama. Hale County is most forthrightly an experiment in framing, as Ross, himself a former athlete, shot the documentary over five years while coaching basketball and teaching G.E.D. courses. And despite his evidently close relationships with his subjects, the film isn’t constructed around major life events or any easily identifiable A-to-B trajectory.

The mere eschewal of narrative thrust itself has profound implications. The film’s subjects can’t help but recall those of Hoop Dreams, a documentary that threaded the everyday struggles of African-Americans in Chicago through an overarching drama about whether its teenage subjects would “make it”: land a college scholarship, play professional hoops, and more broadly “overcome” their upbringing. Hale County is much more impressionistic, and centered around a fundamentally tranquil relationship between its subjects and their surroundings. Much of the film transpires around social gatherings on public sites—parking lots, schools, churches, and front and backyards—and the interactions Ross captures suggest lives so intertwined that the presence of a camera and a filmmaker couldn’t possibly alter or disrupt them.

One of the remarkable things about the film’s offhand sense of intimacy is that it emerges from such a diverse shooting style. Abstracted close-ups dwell on hands in motion (a teen twirling her hair, a group of boys dancing around a car blasting music), while alternately time-lapsed and lengthy, slow tracking shots survey rural landscapes. A group of girls singing through the night are recorded from a distance, and layup drills at a practice session elapse as a series of arms reaching through the air. Ross occasionally switches into a slipstream style of montage that’s purely intuitive, rhyming refracted colors or images of haze floating through a club and then the outdoor air.

In the first of Hale County’s numerous intertitles, the filmmaker refers to his project as a “discovering,” and further on-screen text hints at a frustration with the ways black lives are portrayed in popular media. (One pointedly notes that a particular figure captured in the documentary has no interest in Ross’s project.) After one of the film’s subjects, Quentin, gets a nose piercing and sheds a single tear, an otherwise black screen reads: “How do we not frame someone?” Politics emerge more concretely in a few brief scenes of white police officers walking from a cruiser toward a vehicle, and in Ross’s two major gestures toward the region’s history: first when a teen named Russell discusses missing a celebrity-studded march in Selma because of his athletic commitments, and then with a creeping shot toward a massive plantation house. And the latter is intercut with shots of the blackface-clad silent-film actor Bert Williams peeking through a thatch of branches.

That scene has its blunt force, but the film is more powerful when its imagery more obliquely subverts historical totems, as in a couple of scenes of young men in street clothing striding effortlessly on horses, or when Ross places his camera at the very front of an unidentified procession through a town’s main street, moving forward without hesitation. Hale County works in a few powerful conversations about the area’s economic limitations (a catfish factory is the major employer) and some rending instances of birth and death, but Ross is primarily concerned with how individual lives are viewed and considered. His view is that of an outsider who has been entrusted with intimate access to others, and his film constantly seems to be negotiating that trust, embracing mundane and magical moments while observing more serious incidents from a distance, or not at all. Hale County dwells on the beauty of the everyday as it recognizes the fragility of individual lives.