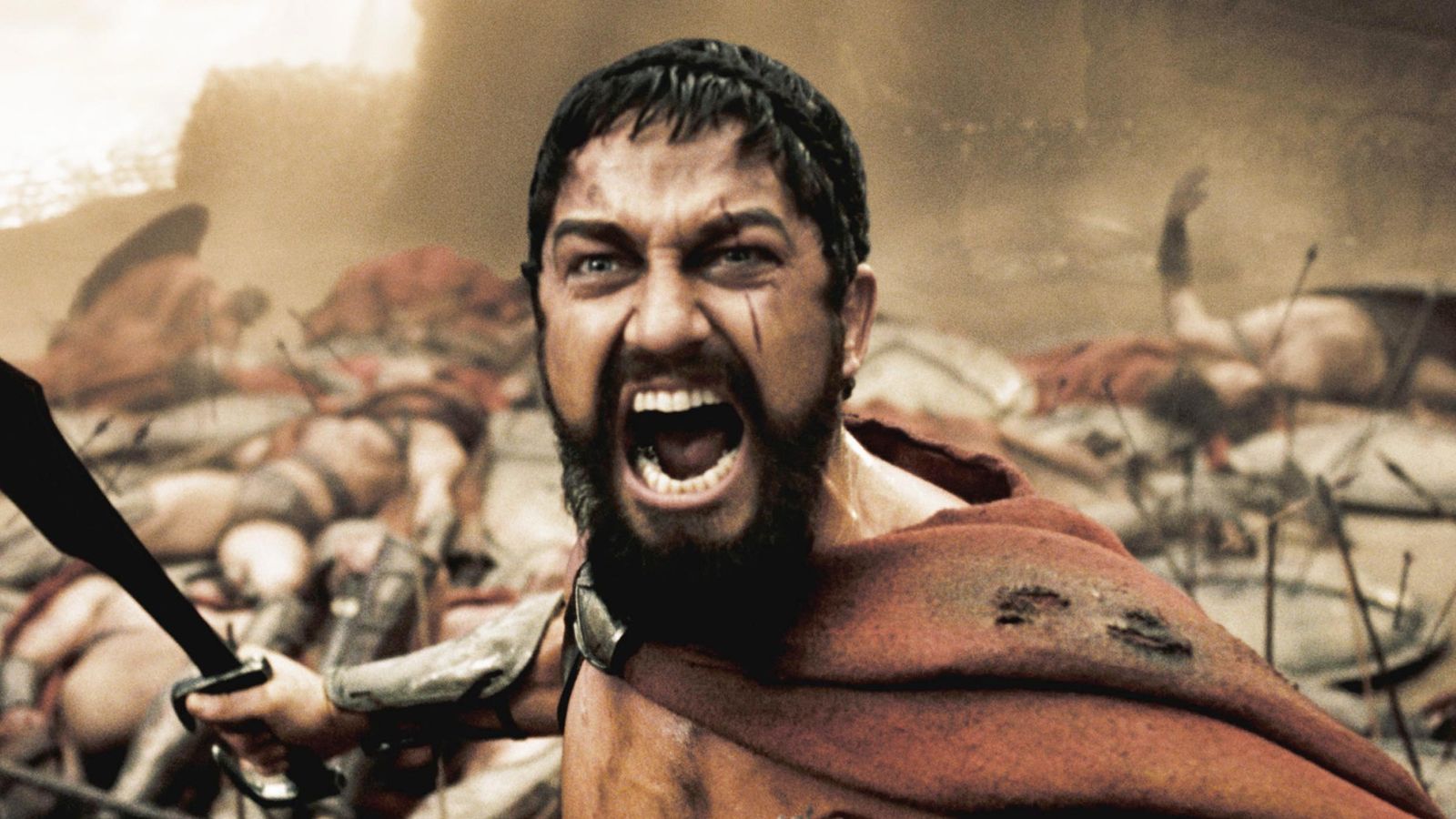 Zack Snyder’s 300, which depicts the battle of Thermopylae in 480 B.C. between a small company of Spartan soldiers and a couple hundred thousand invading Persians, is a twin fount of humorlessness and turgidity (the logical amalgam of these being humidity; wholly appropriate given the number of sweat-drenched soliders on display).

Like Robert Rodriguez’s Sin City (2004), the film is an adaptation of a graphic novel by industry titan Frank Miller, and as in Sin City, the celluloid canvas proves unsuited to conveying the artist’s vision. On the page, Miller’s hyper-real compositions—all jagged landscapes and hard, stately silhouettes—can seem exhilaratingly cinematic, but with the exception of Tim Burton, whose two Batman pictures unofficially and successfully subsumed the dark tone and punchy visual language of the author’s vaunted Dark Knight series, no filmmaker has yet found a satisfactory way to bring Miller’s still-lifes to movie life.

If 300 is slightly less enervating than Sin City (a frieze-dried dud of misappropriated noir tropes and grating misogyny) it’s not because Snyder has taken an appreciably different approach. He’s replicated Miller’s imagery with the same obsessive fidelity (reverence is perhaps a better word) as Rodriguez, but with a fuller color palette. Every scene was shot against a blue screen and subjected to a thrice over by a team of computer artisans. The result of their labors is, on a strictly technical level, pretty impressive. It’s the kind of glazed neo-classical-cum-RPG look (Call it GTA: B.C.) that George Lucas flailed at in his Star Wars prequels.

An apt alternate title for 300 might be The Empire Strikes Back: if nothing else, the film succeeds as a cautionary tale about the wisdom of slaying the messenger. That’s the tack taken by the Spartan King Leonidas (Gerard Butler, avec six-pack and an absolutely righteous goatee) when confronted with an emissary of the Persian Emperor Xerxes, who is looking to complete his collection of Greek city-states. Surrender might play in Polis, but the Spartans, bred from birth as warriors (Leonidas’ formative training, climaxing in the killing of a wolf, is recounted as a prologue), and allergic to intimations of weakness, won’t stand for such talk.

Into the pit go the interlopers—raising the ire of the Persians and speeding up their plans for invasion. Leonidas is bound by tradition to consult a cabal of emaciated mystics about mobilizing the Spartan defenses. The wizened creeps in turn confer with their pet “oracle,” which gives Snyder an excuse in this super-masculinized context to film the spidery gyrations of a mostly naked actress. Her ostensibly tantalizing display (it’s abstract enough to be an iPod ad) means that Leonidas’ plans are a no-go.

So the King takes matters into his own ham-hock-sized hands, leading the titular contingent of three hundred good men into the hills to hold the line against the advancing hordes. He leaves behind his wife, Queen Gorgo (a lithe Lena Headey), who has her own advances to rebuff: those of corrupt local politico Theron (Dominic West), a sneering proponent of appeasement in cahoots with Xerxes who’s all too happy to see Leonidas marching off to certain doom. So are we: the opening movements of 300 are so lugubrious that our impatience approaches near-Spartan levels of bloodlust. It’s the opposite of Snyder’s debut feature, the 2004 remake of Dawn of the Dead, which exerted a vice-like grip from the first deceptively matter-of-fact minutes through to the end of the first act (it stalled at the mall).

A showdown pitting a great many against very few is an inherently compelling situation, however, and after some badly telegraphed business about a hunchbacked turncoat-in-waiting (Andrew Tiernan in Quasimodo-ish makeup) shadowing our heroes (the first of the film’s cruel reveries in grotesquerie) and a portentous tete a tete between Leonidas and Xerxes (an over-dubbed Rodgrigo Santoro, shot to look ten feet tall and looking like an unholy hybrid of Jaye Davidson’s Stargate villain and Mortal Kombat’s Goro), it’s finally time to throw down. This is where the film’s painstakingly rendered aesthetic finally fails it completely. The violence—and there is a lot of it, from quicksilver skirmishes to stately advance-and-repel exchanges—is meant to be balletic, but there’s simply no weight when these titans clash. Snyder is going for the fluid, left-to-right mayhem of the hallway fight in Park Chan-wook’s Oldboy (2004), a mini-masterpiece of tactility where you felt every terrible, glancing blow. By contrast, the color-treated combatants of 300 exude only a wispy, phantom menace. There’s more interest in the licorice skies above than the battles raging so neatly below, especially since our Horatios prove difficult to know. With the exception of Butler, who affects his best Russell Crowe swagger, they’re as undifferentiated as their foes.

Miller’s own artistic frame of reference is quite wide, but his acolytes work with blinders on. Weaned comfortably on his genre operas, they thoughtlessly enshrine—rather than analyze or usefully subvert—the adolescent fantasies therein. Sin City teems with weary white knights and distressed damsels in various states of undress; 300 is a collection of He-Man poses. There isn’t a ten-minute stretch unpunctuated by some terse speech about death with honor; the brutality of Spartan society is exalted straight-facedly as a design for life. (Miller’s next opus should be set on the Klingon Homeworld). Were Snyder willing to inject the proceedings with even the slightest sense of humor– a Spartan who doesn’t fit along the upright-protector/sniveling traitor binary, or some sly acknowledgement of the frenzied homoeroticism that suffuses the piece—the steroidal tone might be less off-putting.

As is, there’s plenty to bothered by, from the conflation of both physical ugliness and androgyny with moral weakness and evil (Xerxes bides his time between battles with a traveling freak-sex-show), to the patronizing misogyny of Queen Gorgo’s character arc (in Miller’s universe, female empowerment means publicly knife-raping the man who violated you and then not saying another word while you fret over your absent husband) to the uncomfortable (and likely unconscious) political allegory—with degenerate, Freedom-hating Eastern barbarians at the gate, a bold leader’s only recourse is to circumvent the law and try to rally wider support via a bloody and well-publicized Pyrrhic victory. (Yes, the imperial imperatives are reversed, but the white=good, dark=bad color scheme of the characters is fairly easy to decode). 300’s greatest failing, however, is its relentless and utter dullness. Fittingly for a film so preoccupied with scale, it comes down to the principles of inflation. When every shot’s a money shot, the whole enterprise becomes worthless.