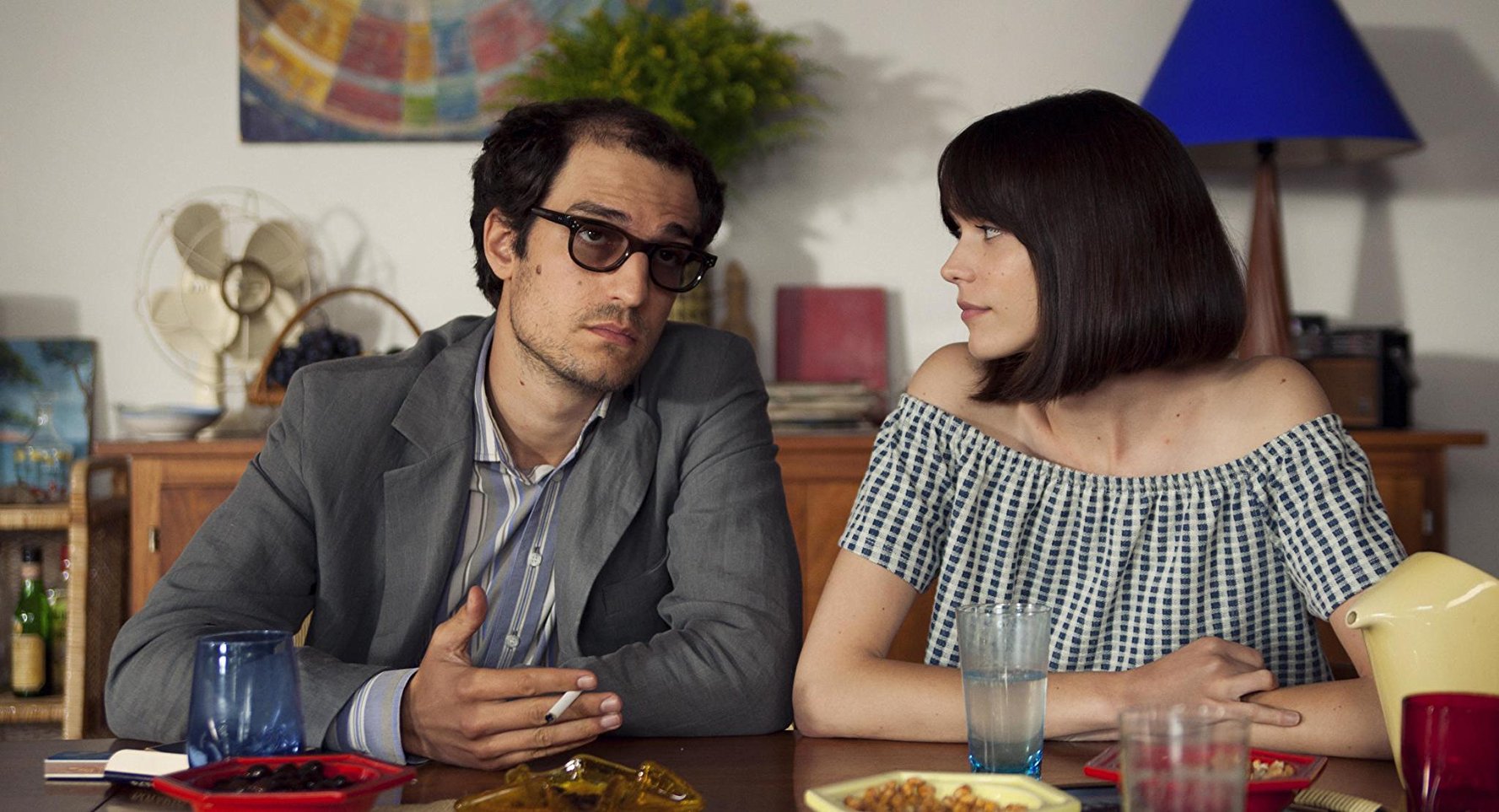 Michel Hazanavicius never has trouble coming up with bad ideas, and turning the romantic life of Jean-Luc Godard into a screwball comedy will be hard for him to beat. One good thing comes out of this, at least in part: the casting of Louis Garrel as the Nouvelle Vague pioneer. His is a credible on-screen representation of JLG, though less because of the actor’s performance than his look, which incorporates a falsified receding hairline and a pair of dark eyeglasses. But each time Garrel’s pop facsimile deviates from that look, especially when he takes off those shades, the illusion is instantly broken.

Godard Mon Amour’s comedic action is superficially entertaining at the start, with Garrel lisping his way through a self-aware imitation of Godard and Hazanavicius playfully stitching together scenes of marital discord and sociopolitical bickering with brisk editing rhythms and rapid-fire dialogue. But as that effort continues to reduce the bold ideas and philosophies of Godard’s “revolutionary” period—as well as the toll his ideologies took on his personal and professional relationships—into fodder for simple-minded parody, Hazanavicius again outs himself as a shallow opportunist, and the film as another empty exercise in borrowed style.

With The Artist, his homage to silent cinema, Hazanavicius had a whole era of filmic touchstones he was drawing inspiration from. Godard Mon Amour narrows that frame of reference to just the basic signifiers of Godard’s late-1960s aesthetic: primary colors, avant-grade sound sync, ironic voiceover in relation to on-screen action. And it uses all this for the seeming purpose of lampooning its fictionalized caricature. The film plays like an extended trolling session: When Godard voices his objection to gratuitous film nudity, Hazanavicius cuts abruptly to a domestic scene of the man and his wife, Anne Wiazemsky (Stacy Martin), in the nude, with the oblivious JLG brushing his teeth while haughtily lecturing her.

There’s certainly a precedent for Hazanavicius to explore his subject’s anti-Semitism, as he does in one scene, and probable cause to tackle Godard’s misogyny, especially considering that Godard Mon Amour is partly based on a novel that Wiazemsky wrote about her 12-year marriage to the auteur. But the broadness of Hazanavicius’s comedy is crass and disrespectful, and even his characterization of Wiazemsky—a novelist and director herself—seems condescendingly thin: the typical long-suffering wife of a brilliant man.

Finally, when the film abandons comedy and takes an abrupt turn into earnest melodrama, playing up the narrative of a romantic tragedy, the tack feels even more disingenuous than it did in The Artist. Hazanavicius co-opts Godard’s personal life for prestige-picture sentiment—and insults the auteur’s radical style with the most conservative iteration of it conceivable.