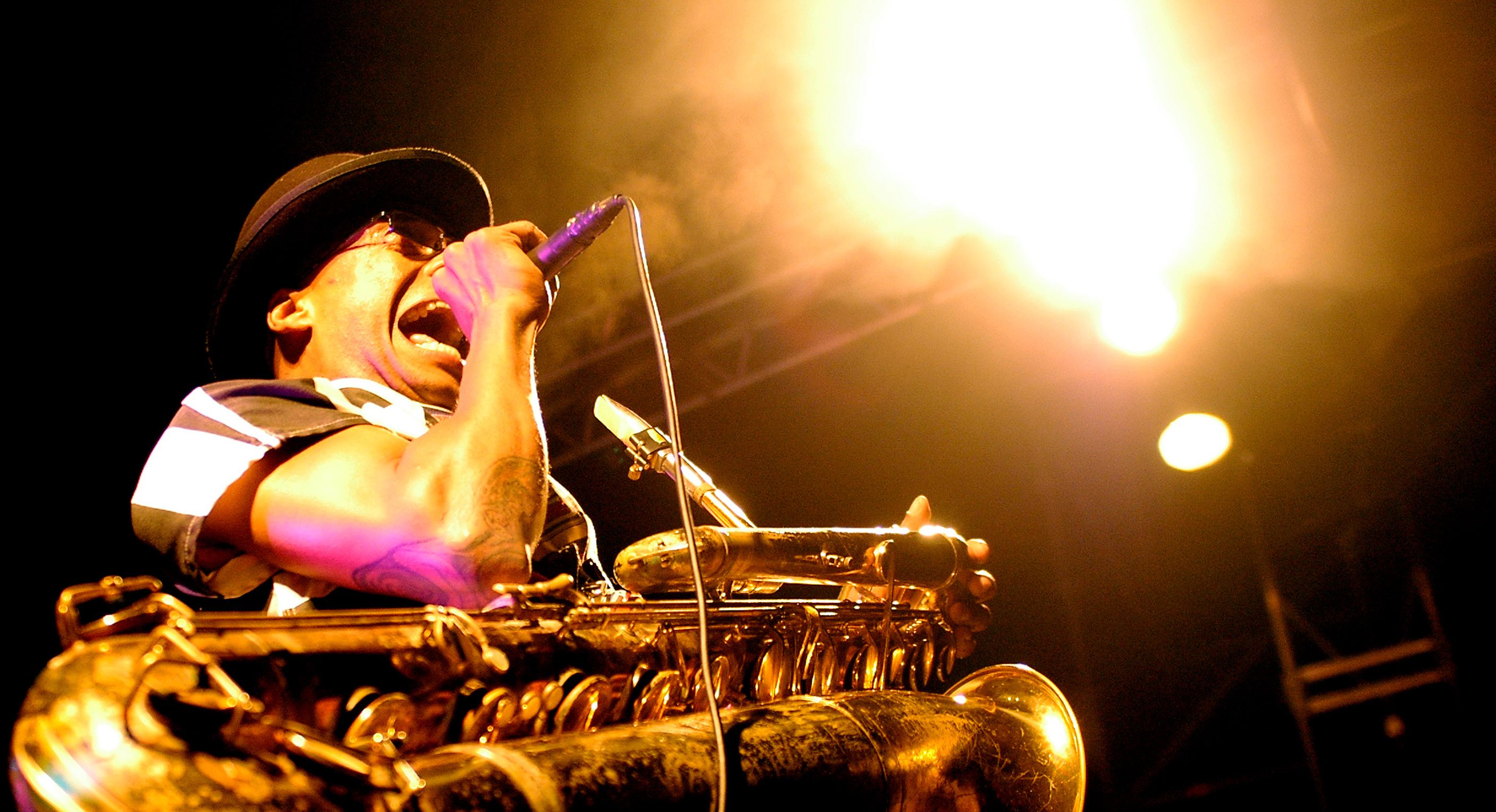 “I’ve seen them do every style—in the same song!” Mike Watt of Minutemen declares early on in Everyday Sunshine: The Story of Fishbone, Lev Anderson and Chris Metzler’s cinematic tribute to the titular SoCal black punk rock band. Fishbone also makes other white talking heads, including Perry Farrell, Gwen Stefani, Flea, and, uh, Tim Robbins (who seems to have wandered into the wrong documentary), gush like giddy school kids. Even better regarded black musicians such as Branford Marsalis, who says about the band, “The musicians get it; the other people don’t,” and George Clinton, who theorizes that the members are too white for black people and too black for white people, seem in awe.

Similarly, the co-directors themselves have attempted an all-over-the-place style—and surprisingly succeeded. In addition to straightforward interviews with both famous fans and the founding members of Fishbone, and footage that segues between tours past and present (a jam-packed concert in San Francisco in 1992 gives way to a small town square in Hungary where gray-haired folks on lawn chairs await the nonplussed rockers’ performance), the doc uses whimsical animation combined with narration by Laurence Fishburne. There are even news reports, from the ‘80s crack epidemic to the Rodney King beating, to put the band in (black) historical perspective. Fishburne explains the court ruling that desegregated Los Angeles’s schools via mandatory busing, resulting in the members of Fishbone coming of age in white suburbia. Through the microcosm of a band influenced by everything from R&B to Rush, to their contemporaries in SoCal’s exploding hardcore scene of the ‘80s, big issues such as the sociological schizophrenia that occurs from forced integration and growing up apart from one’s culture are made personal. (“He’s devoid of hood-sense,” one musician says about lead singer Angelo Moore, the only member who actually lived in the suburbs—remembering how the happy-go-lucky guy always got picked on visiting his band mates in South Central. “You just can’t come to the hood smiling all the damn time,” he adds.)

But even the still-sunny and fashionable frontman admits that diving into the lily-white punk scene—literally in the mosh pits—was the perfect outlet for all the rage he felt about racism. Ice-T succinctly points out that the problem with L.A. is that you can “be in the hood and see Beverly Hills.” The economic and racial disparity is inescapable. With typical teenage aspirations no deeper than to play clubs and have fun, Fishbone nevertheless managed to land a record deal at staid Columbia. Their white producer, David Kahne, vividly recalls his frustration with the segregated music departments that didn’t know what to do with an all-black band they couldn’t shelve under “black music.” “You just didn’t see black punk rockers,” offers Bob Forrest of Thelonius Monster—a statement that should have been quantified with “in Los Angeles.”

Indeed, as thorough as the filmmakers are in providing a political context for Fishbone, they’re often reduced to tunnel vision in an attempt to lift the unheralded band to its rightful place in music history. Guys like Ice-T hyperbolically proclaiming Fishbone the “OG” shortchanges a larger picture that includes D.C.‘s Bad Brains and even the rude boys in England where interracial Two Tone bands like the Specials were breaking similar ground. Besides, the doc’s dynamic concert footage and soundtrack easily negate the need to place the false crown of “only black punk rock band on the planet” onto the Fishbone head.

In addition, the co-directors are never short of outsized and unconventional material since these now-middle-aged rockers have all led—and in some cases continue to lead—colorful lives. Guitarist Kendall Jones’s psychiatric meltdown made the tabloids when it resulted in an intervention by bassist Norwood Fisher and Jones’s girlfriend and brothers that was subsequently tried as a kidnapping. When Moore becomes fixated on the theremin, which he says makes him “happy,” the filmmakers cut to another member begging, “Kill the theremin. Kill it now.” Unfortunately, though, by the time all the Fishbone originals, save for Moore and Fisher, have dropped out, the doc has also lost steam. Moore perceptively likens the rocky relationship between these remaining founding fathers to a marriage in which the couple must always work out their differences and stay together for the sake of the kids. This story of two black men in white America who 25 years ago made a till-death-do-us-part commitment to each other and their art is a whole other movie in itself.

Review: Hell and Back Again