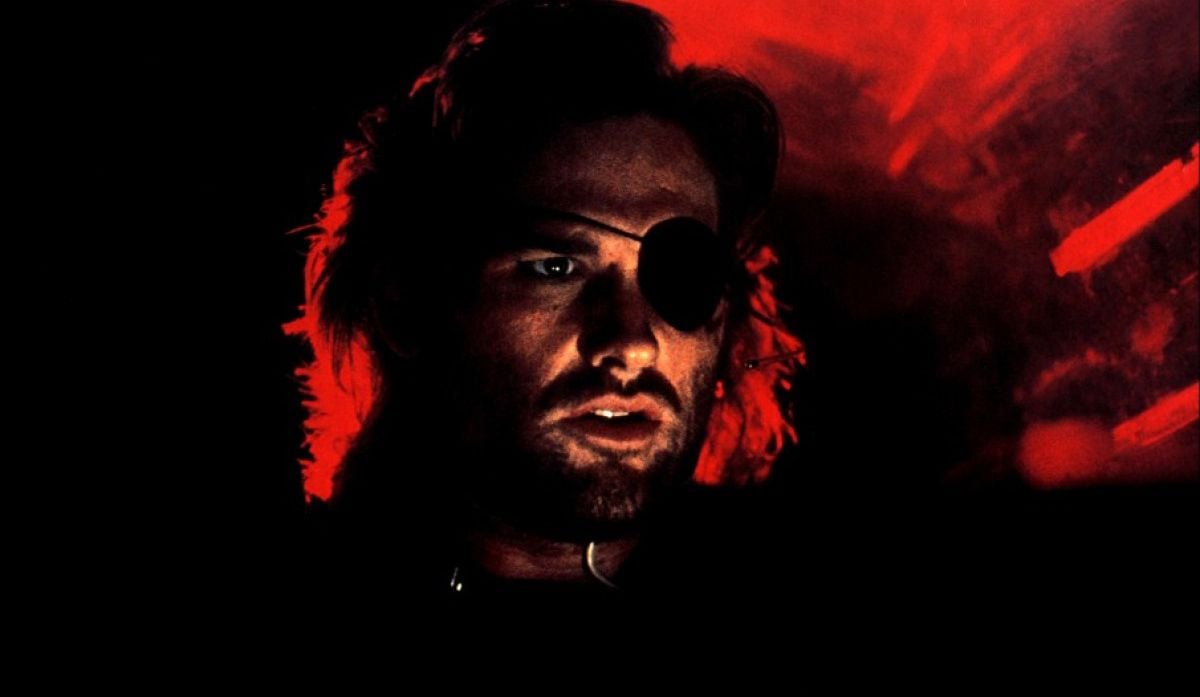 The first time we see Snake Plissken, he’s being led away from a police chopper. He pauses to take in the scenic tarmac outside the federal pen indicated by the movie’s title. An officer hustles him along toward processing and embarkation. There’s no hint of the ruthless, Parker-esque brute in the long-shot intro; when the cop nudges him with the butt of an assault rifle, he merely jerks his shoulder in a gesture of spiteful compliance, hardly distinguishing him from the rafts of two-time losers in the history of big-house movies. After he’s led through processing, we don’t get a proper introduction to Plissken until almost 20 minutes into the film.

This being a John Carpenter film, on the other hand, character introduction precedes character sighting, beginning with the opening titles: white Albertus typeface against pitch black that movie buffs will immediately identify as “canon Carpenter”; the stately synth music, composed, as usual, by the director, foretells menace, promises no-nonsense delivery, with an undertaste of the mythic-loner ballad, one tough mother against God and everybody. Even first-time viewers get a good, early sense of who they’re going to be riding with.

This was the early ‘80s, as the gateway of grand possibilities remained slightly ajar for the American auteur (guys like Carpenter, Sam Fuller, and Joe Dante), and Carpenter’s partnership with Embassy Pictures could not have been better timed. Curiously, many of the films produced at the behest of company’s then-president Robert Rehme, such as Phantasm, The Howling, and Scanners, shared with Carpenter’s early films the same vague foreboding, of an indeterminate apocalypse just beyond the horizon. With relatively spare production values, it’s not far-fetched to say that movies like Escape from New York, along with other films from Carpenter’s peak period, represent the closest thing we have to an American mono no aware cinema: the passing of things, all things, be it from a nuclear blast, a shapeshifting extra terrestrial, or under the jackboots of an American police state.

Unlike its spoofy, punch-drunk sequel, Escape from New York is one of Carpenter’s more subdued films—a close relative to the still-extraordinary Assault on Precinct 13, which similarly exploited the possibilities of shaking the audience up with carefully planted, obtrusive noise in a sea of uneasy silence. Most of the images are elaborate confections of urban blight, etched against a nearly unlit soundstage, and the sound mix, until the finale, is rarely louder than Snake’s elbow busting out an old windowpane.

And what is the conceit of the excised Manhattan prison but an excuse to give the tough-talking, low-riding rogue’s gallery of American crime fiction the run of the place? For this surprisingly ornate widescreen fantasy, a hybrid noir/science fiction, its beating heart is the index of ideas and design flourishes: a homebrewed commedia dell’arte in a gutted movie palace; a vintage New York hack (Ernest Borgnine) hurling molotov cocktails from a trapdoor in his roof; an oil derrick in Brain’s (Harry Dean Stanton) customized New York Public Library fortress; chandeliers and disco balls dangled from the Duke’s (Isaac Hayes) motorcade. Even the flesh-eating Crazies parody scurrying rats and infernal cockroaches. America may have done its best to realize the prophecy of Billy Joel when he sang about sinking Manhattan island at sea in “Miami 2017,” but the inmates, left with the asylum, can’t quite let the Big Apple falter.