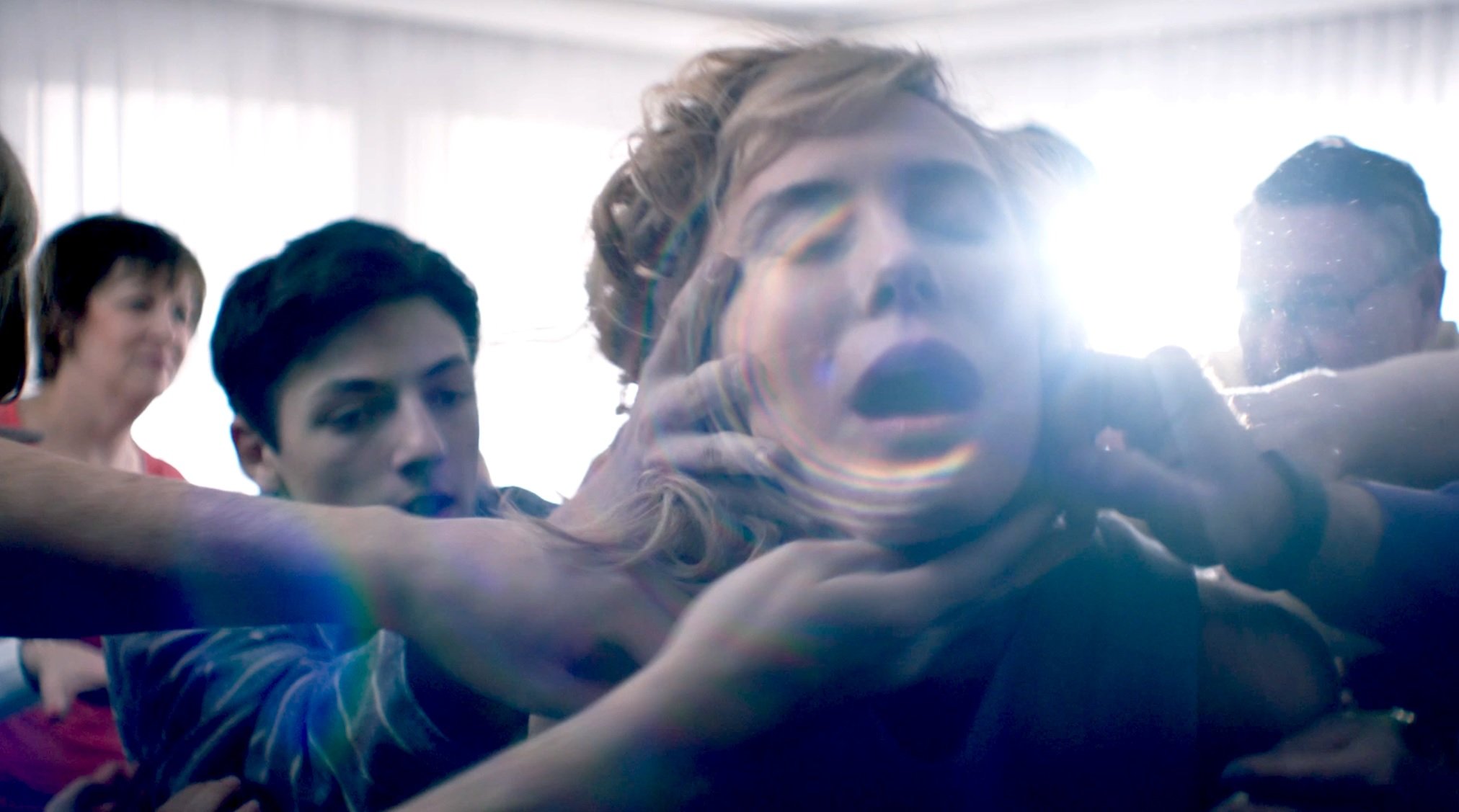 In the anthology film collective:unconscious, five blossoming independent filmmakers, Daniel Patrick Carbone, Josephine Decker, Lauren Wolkstein, Frances Bodomo, and Lily Baldwin, adapt each other’s dreams into shorts that are united by a framing device in which hypnotist Daniel Ryan speaks with each artist, compelling them to enter a trance state. The implied intention is to cleanse cinema of literal-minded clutter, such as the three-act structure that’s populated by characters who resolve tidy arcs on cue by the end credits, and, by extension, to cleanse our minds of the frenetic activity insidiously encouraged by consumerist society.

Carbone’s “Black Soil, Green Grass,” drawn from Wolkstein’s dream, is the most conventional short of this lot, relating a story of a man (Frank Mosley) in the country who attempts to blot out the eerie droning emanating from a nearby tower, which plays a recording of a deep male voice counting “One sheep, two sheep, three sheep,” and so on, for presumable infinity. The man wishes to replace this recording with the stirring Romanian singing of an aging woman (Sandra Weigl) whom he tapes on primitive equipment, fashioning a surround sound out of speakers arranged on the countryside in a mini-Stonehenge configuration. Unsatisfied, he decides to overthrow the tower, which parallels the notion the introduction offers of blotting out deadening media for the sake of personal peace. Despite its relative straightforwardness, Carbone’s staging is hypnotic, and the black-and-white cinematography resembles an uncanny daguerreotype X-ray of an enslaved society. Wolkstein’s “Beemus, It’ll End in Tears,” based on Bodomo’s dream, also revels in the potential cleaning of an authoritarian slate, using nightmarishly symmetric imagery to relate a tale of a masculine hierarchy turned upside down by apocalypse.

Decker’s “First Day Out,” taken from Baldwin’s dream, utilizes subjective camerawork, familiar to her prior feature films, weaving in and out of various points of view as intricate and exhilarating tracking shots record men who remember getting out of prison, encountering the usual social hypocrisies and obstacles. Decker contrasts the sadness of the men’s plights with the ecstatic joy and sensuality of her techniques, including alternatingly soft and angular dance choreography that recalls stripped-down Bob Fosse numbers, wedded to purposefully fake props and explosively colorful cinematography. The short suggests that American cinema could rediscover its possibility for irrationality by re-embracing its roots in theater and vaudeville, confirming Decker to be one of the most exciting new voices working in the medium.

Bodomo’s “Everybody Dies,” adapted from Decker’s dream, and Baldwin’s “Swallowed,” from Carbone’s dream, are the most ambitious and unnerving horror films to be released so far this year, illustrating the emotional depths the genre can plumb when divorced from a mechanical need to jolt audiences on demand. Bodomo brilliantly approximates the fuzzy, lo-fi aesthetic of an 1980s-era public broadcast television show that’s aimed, in this case, at conditioning black children to accept the fact that they die with far greater regularity than their white counterparts. The increasing look of disgust on the host’s (Tonya Pinkins) face, mixed with the joy she’s supposed to be feigning, conjures a deep and unshakable fury.

“Swallowed” captures a different kind of fury, following a mother (Baldwin) as she comes to resent breastfeeding her child, feeling detached from her family and society at large. The centerpiece involves ritualistic dancing that inverts the meaning of the choreography of Decker’s short: Where the latter professes ironic joy in misery, this one expresses ironic misery during an occasion of theoretical joy. Like Decker, Baldwin uses long, intensely subjective takes, gradually dramatizing a body’s potential internal invasion as a collection of writhing figures that might mock the vulnerability the mother experiences as feeling newly secondary to her child. A disturbingly inscrutable coda connects “Swallowed” to the concern with stereotypes, and multimedia’s exploitation thereof, that runs through this haunting collection like a fine, sharp wire.