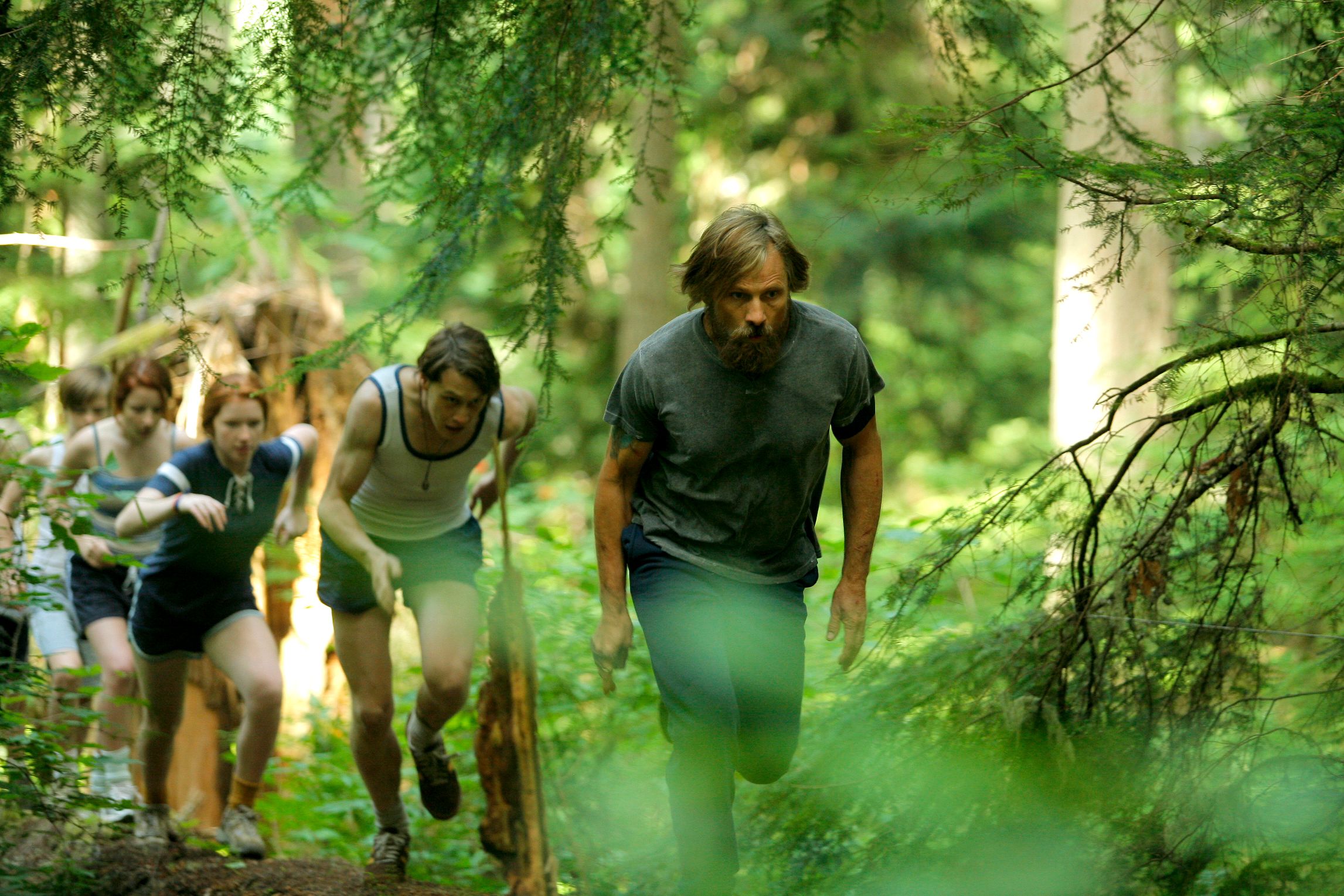 Writer-director Matt Ross’s Captain Fantastic buries an advancement of one of the great American fantasies—that we can chuck it all, pack up the family, and move off the grid—beneath a grueling avalanche of quirk. Viggo Mortensen’s Ben is a tough but loving patriarch raising six kids deep in the forests of the Pacific Northwest, far from the vulgarity of American society. The paterfamilias keeps his progeny in peak physical and mental shape with an intense regimen of exercise, study, and survival training. They live off the land, hunting their own food and sleeping in a giant teepee. At night, they sit around the campfire reading books like The Brothers Karamazov and Guns, Germs, and Steel before breaking into song. But their Edenic reverie is broken when Ben learns that his wife, the kids’ mother, has killed herself.

Despite threats by his straight-laced father-in-law, Jack (Frank Langella), to have him arrested, the family piles into a big blue bus and makes its way to New Mexico for the funeral. The trip offers Ross ample opportunity to pit his band of wacky hippies against the vagaries of the modern world, leading to scene after scene of the family freaking out society’s squares. Throughout, their idiosyncrasies are played for punchlines, from Ben walking out of his bus fully nude for no apparent reason other than to shock a couple passing by, to his insistence that his kids drink wine with dinner.

Captain Fantastic is premised on a radical act that it dutifully trivializes at every turn. Ross makes little attempt to illuminate how and why people might choose to alter their lives so drastically, and basic questions (what exactly is Ben’s endgame? Does he expect his kids to get married at some point?) are never really answered. Instead, the family’s exposure to society renders them increasingly absurd, to the point that, when they finally arrive at the funeral, they burst in mid-service wearing garish clothing (a red ‘70s suit, a gas mask, a dinosaur costume), with Ben hopping on the altar to deliver a screed against organized religion. This isn’t the behavior of radicals bucking the system; it’s the antics of characters contrived to hit the quirky, crowd-pleasing notes that made Little Miss Sunshine a hit with audiences.

Ben is explicitly portrayed as a leftist, one who celebrates “Noam Chomsky Day” instead of Christmas and who has clearly indoctrinated his kids with an anti-capitalist ideology. At one point, he identifies his eldest son, Bo (George MacKay), as a “Trotskyite,” to which Bo, offended, retorts that the proper term is “Trotskyist,” and, anyway, he’s now a Maoist. At various points, the kids deliver pithy little diatribes against consumer culture with the rehearsed precision of a sales pitch. Ross may be sympathetic to the family’s politics, but by placing these messages in the mouths of these cartoonish characters, he allows the audience to dismiss them as just delightful quirks.

Most damning of all is the shallowness of the film’s social critique. Ross gestures at a philosophical foundation to the family’s primitivism via references to Plato, Chomsky, and the Bill of Rights, despite the fact that none of these thinkers or writings advocate anything close to the back-to-the-land lifestyle that Ben and his children adopt. Captain Fantastic also simplistically conflates capitalism and consumer culture, failing to provide a systemic critique of either. The film’s nebulous ideology can be boiled down to the family’s repeated call and response: “Power to the people. Stick it to the Man.”

While Ben’s political convictions are superficial, Mortensen at least lends the man a convincing emotional core. Blending clear-eyed ruggedness with warm-hearted paternalism, and just a dash of cultish intensity, the actor breathes life into fantasy. Unfortunately, Ross never provides a sufficient counterweight to Ben. The film’s plot proceeds toward an inevitable showdown between Ben and Jack over custody of the kids. Jack considers his son reckless, and an accident involving one of Ben’s girls seems to prove his point, which leads Ben to reluctantly agree to leave his kids with Jack. But this standoff carries no weight, as Jack represents no countervailing principles; he’s just a narrative obstacle for Ben and his children to quickly overcome.

Once Jack’s been carted off screen, Ross piles on about five different feel-good endings, the most egregious of which sees the family performing an exultant cover of “Sweet Child O’ Mine” as they cremate their matriarch’s corpse on a bonfire, ostensibly giving her the funeral she would have wanted. The moment is calculated for maximum emotional punch, but the family’s choice to sing a popular rock song rings hollow in light of the high-brow tastes and ignorance of popular culture they demonstrate throughout the film. Captain Fantastic ends on a quieter note than this boisterous funeral scene, a tranquil shot of the family eating breakfast in their new home that lingers several beats longer than audiences might expect, inviting us to study Ben’s expression, a subtle and poignant mixture of serenity, anxiety, and perhaps even resignation. It’s an unusually reflective moment in a film that more often prefers broad whimsy to rigorous examination.

Review: Hillary’s America: The Secret History of the Democratic Party