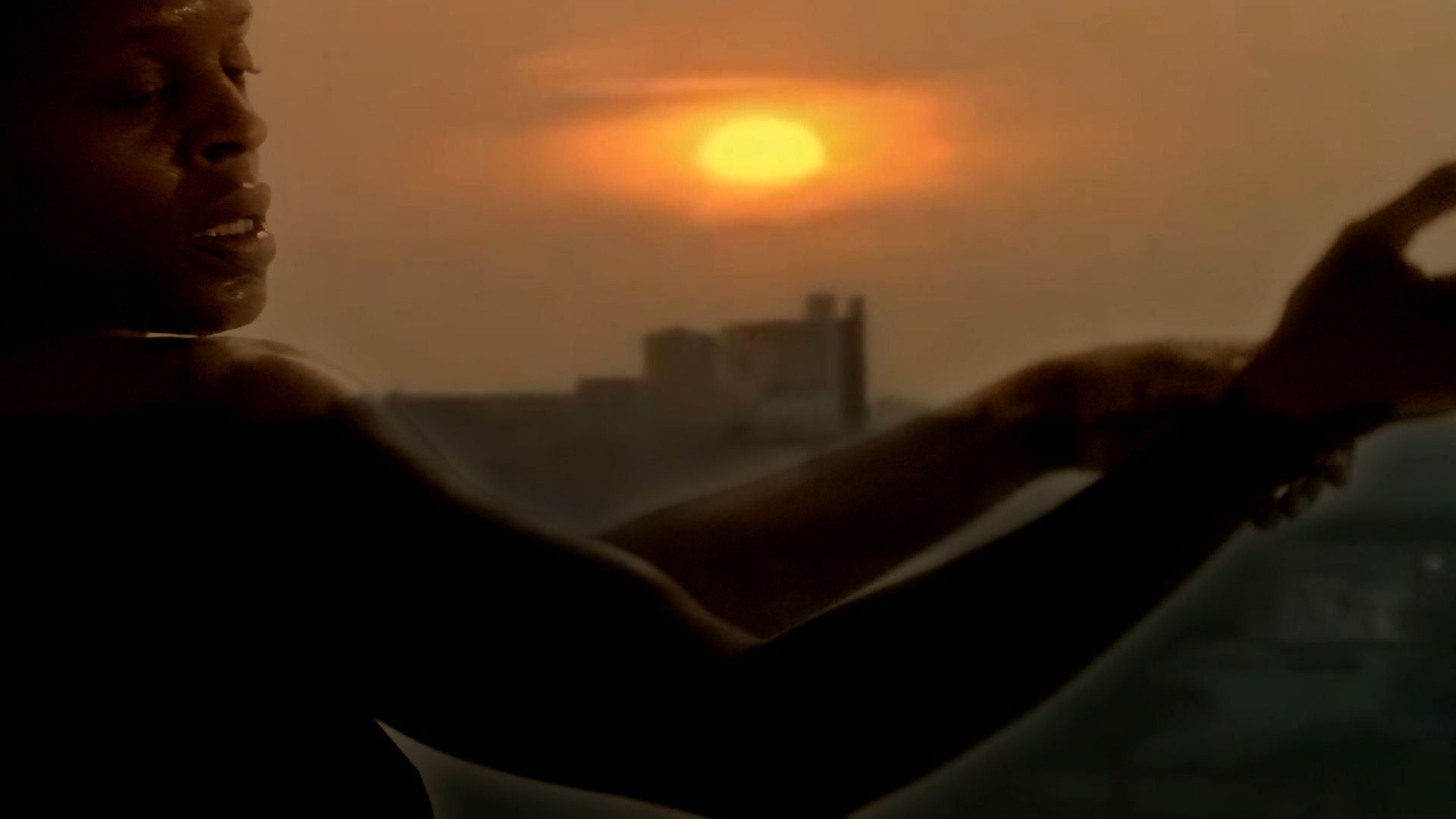 Early in Andrew Rossi’s Bronx Gothic, we see Okwui Okpokwasili performing her one-woman show of the same name to a small audience. Okpokwasili is in a corner of the stage, lit against a screen, dancing in a rhythmic frenzy. We hear her breathing and are aware of every particle of her body as being in movement. She doesn’t attempt to hide the toil of her physical exertion, as our sense of her body’s duress is pivotal to our feeling as if we’re intruding on her, witnessing a privileged moment. This dancing is said to last 30 minutes in the show before a plot is introduced, deliberately courting impatience. Okpokwasili says that she’s asking her audience, “Can you be here?”

In her “Bronx Gothic,” Okpokwasili plays two African American girls, one of whom is conventionally attractive and sexually abused, while the other is less attractive and intimidated by her friend’s appearance and experience. To her audience, Okpokwasili reads quasi-autobiographical letters in which these girls describe their joys and their resentments. It’s clear that these girls each represent a side of a single woman’s warring polarities of pride and self-loathing. “Bronx Gothic” is a scathing examination of the premium our society places on beautiful and largely white bodies, and of the sense of diminishment this fosters in brown girls and women.

Okpokwasili asks her audience to turn away from the distractions of the 21st century and to focus on the space this African-American woman has carved for herself in front of them. This is the purpose of the 30-minute opening, as we’re seeing a body corporeally wrestle with the geometric strictures of the stage containing it. Rossi occasionally shoots Okpokwasili in slow motion so that we can appreciate her precision as a dancer, suggesting an angular yet fleshy tuning fork. Certain gestures literalize the idea of one girl transforming into the other, which Okpokwasili renders as movements resembling push-ups as performed by a puppet who appears to be breaking from its strings—a direct yet ambiguous metaphor for the male standards that imprison women.

“Bronx Gothic” has been a sensation, and Rossi follows Okpokwasili over the final three months of its tour, starting in Milwaukee and ending in the Bronx, not far from where she grew up, near the sites of the recollections that fuel her work. Rossi also films the performer in workshops with predominantly female Caucasian audience members, and the expressions on the women’s faces as she discusses her experiences and motivations are revealing and heartbreaking. When Okpokwasili says that our society is so afraid to let little girls understand what’s happening with their bodies, and that she wanted to make a voice, screaming out in the wilderness, “I am here and this is what is happening to me,” Rossi shows a woman in the classroom crying.

Alternating between workshops and performances, Rossi builds to the show’s crescendo, in which Okpokwasili, a woman playing two girls as one damaged woman, reaches a dizzying catharsis as her body quakes while uttering obscenities that cut to the heart of conditioned self-hatred. The men in the crowd appear deeply uncomfortable as Okpokwasili elaborates on menstrual blood and “pussy hair,” which serves to further underline how deeply white-male-centric our society is, how fastidiously it arises from a male purview that’s achieved at the expense of the female and/or the non-white.

By design, Bronx Gothic is intensely preachy. And this preachiness serves a therapeutic purpose, offering jolting possibilities for empathy. Yet, the cutting between the stage show and the interviews with Okpokwasili and her family diminishes the power of “Bronx Gothic” itself, which is predicated on our being forced to reckon with it on the artist’s terms. We don’t have to watch Okpokwasili dance in the corner of a stage for 30 minutes, say, as the work is broken up into digestible stanzas that allow us to recover from its intense interiority—a recovery that’s not available to members of the actual show.

Questions are left hanging for the sake of empowerment. Okpokwasili is occupied with her identity as a marginalized woman of color in a white world, and she’s married to a white man, Peter Born, who’s the director of “Bronx Gothic.” It’s striking that a show about white dominion is directed by a white person, and Rossi and Okpokwasili don’t examine this irony, and so the film is informed with a whiff of promotional self-righteousness. If we’re to be denied a filming of the show in full, we should be privy to the irreconcilabilities of its creation. Bronx Gothic isn’t a film in its own right, but an advertisement for what appears, to an outsider, to be a work of staggering rawness.