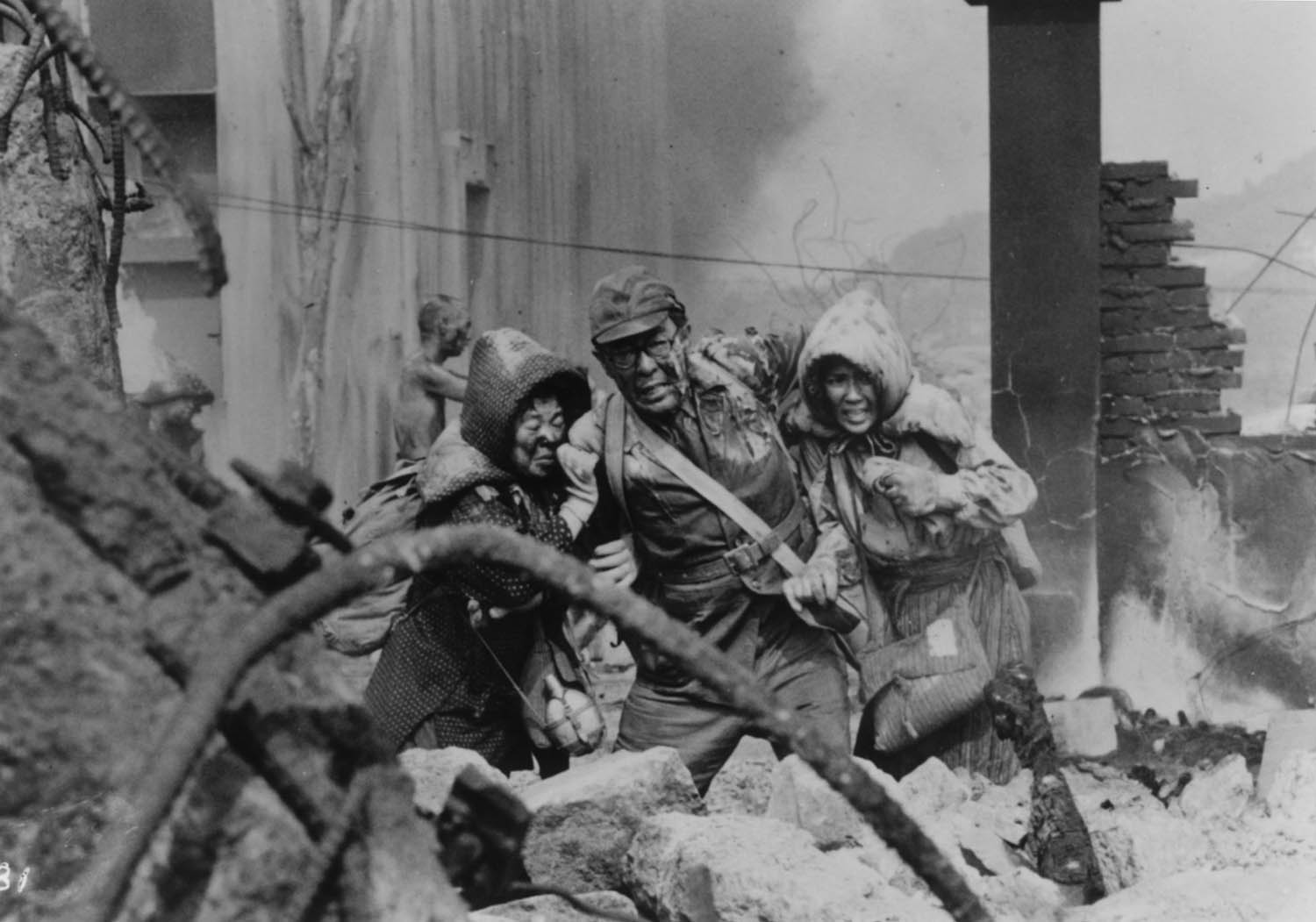 Already an accomplished chronicler of humanity’s extreme behaviors and obsessive drives, Japanese director Shōhei Imamura, in 1989, turned his cinematic attention to one of the century’s undying horrors, the bombing of Hiroshima. Adapting Ibuse Masuji’s 1965 novel about the aftermath of the nuclear fallout, Imamura extended his career-long exploration of mankind’s psychic urges by taking as his subject the ultimate end-point of these drives, an attack that, in its impersonality and the slow unfolding of its damage, stands as the most abstract of atrocities. But even as the bombing remains incomprehensible to its victims (one of the film’s suffering characters says he can’t die without understanding why someone would do such a thing, then dies anyway), its consequences register as sickeningly concrete.

While most of Black Rain takes place in 1950, the film’s astonishing opening sequence places us at the epicenter of the event, August 1945. As a bus embarks on its morning commute, the windows suddenly blow out and, amid a swelter of screaming, the attack begins. Locals make their way across the rubble, stepping over charred bodies. A woman holds a dead baby to her breast. Inky globs of precipitate (the eponymous “black rain”) fall from the sky. But despite the graphic nature of the imagery, the cranked up scenes of melodrama (a man demands proof of identity from the bomb-damaged brother that he can’t even recognize) and the swirling strings on the soundtrack, the sequence plays out with a measured lack of hysteria, unfolding as a horrific but not unduly exaggerated depiction of events. When the mushroom cloud finally appears, it registers as an utterly alien presence. “What is that thing?” gasps one of the film’s characters and despite the now iconic state of the image, as we see it through the eyes of the victims, it seems as fresh and as terrible as the Twin Towers toppling down.

If Imamura often positions his characters in a direct, if ambiguous, relation to their turbulent times (from Kinta’s attempts to profit from the American occupation in Pigs and Battleships to the vast historical backdrop that underscores Tomé’s plight in The Insect Woman), then Black Rain makes the connections ever more explicit. After having moved to a nearby village, the film’s Hiroshima survivors live out the consequences—physical, psychological, and social—of the events of WWII, a half decade down the line. While nearly the whole town experiences failing mental or physical health, the institutions that govern Japanese family life suffer accordingly. And unlike in many of Imamura’s other films, there’s not even much pretense that these characters can do anything about it.

In order to examine the overall collapse of a way of life signaled by both the detonation of the atomic bomb and the devastating defeat of WWII, Imamura casts his film as a family drama. Five years after the armistice, Shigematsu Shimizu (Kazuo Kitamura) lives with his wife (Etsuko Ichihara) and his niece Yasuko (Yoshiko Tanaka) in a rural village near Hiroshima. Although none of the three suffer any immediate ill effects from the fallout, Shimizu occupies himself with marrying off the young girl as soon as possible, lest she suddenly become symptomatic. Since rumors abound that Yasuko was at “ground zero” of the blast, he has a hard time lining up suitors, even after obtaining a clean bill of health for his niece from the doctor. And when she finally does find a man willing to marry her, Yasuko herself scares off her fiancé, hinting that she may yet show signs of illness.

Imamura shoots the film’s numerous domestic scenes at an Ozu-like remove. Placing his camera low to the ground, fixing it in place, the director mimics the surface placidity of a traditional Japanese family drama in which the social order may become subject to variations but is never seriously challenged. Here, though, everything is in breakdown, even if the characters, like Imamura’s camera, desperately attempt to assert normality, in this case by chanting sutras or arranging marriages. But just as latent illness threatens all the people exposed to the blast, so the old order simply won’t hold. Madness breaks out, men can no longer work, sudden deaths upset the family structure. And Imamura obliges by intercutting striking scenes of impressionistic horror amid the surface calm (as when a soldier experiences a wartime flashback and the director amps up light and sound accordingly) or pins down haunting images of unrest (repeated shots of the household clock marked by the shadows of the hands that were burned into the face at the moment of meltdown).

But with social breakdown comes the chance for new possibilities, on however limited a scale. In one of the film’s few moments of optimism, Yasuko, her latent illness already becoming manifest, strikes up a friendship with a shell-shocked soldier. As she explains it to her uncle, “I feel like myself with him.” Although their different social classes would normally make him an unfit subject for marriage, in the aftermath of the war, this no longer seems like so great a barrier. But even though Shimizu may agree to the match, a rapidly deteriorating Yasuko soon collapses and, as the soldier carts her off to the hospital, any thoughts of a positive future seem, at best, questionable. Under the shadow of the bomb, hope is short-lived and, in Imamura’s fatalistic vision, individual agency is soon dissolved by the forces of history. “We are witnesses to the end of the world,” an old priest intones in disbelief. In Black Rain, it really feels like it.