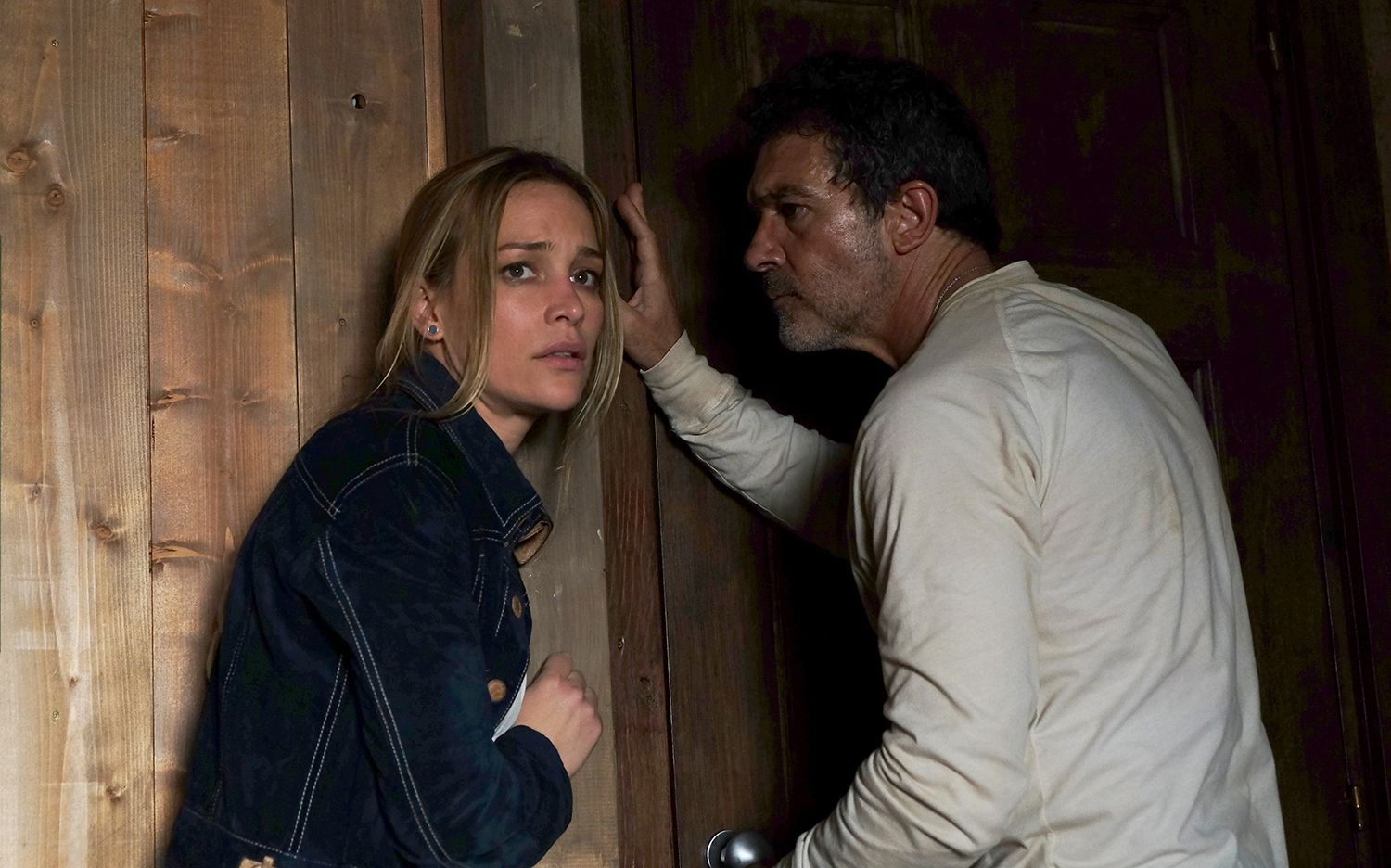 In opening with a shot of a struggling writer, Paul (Antonio Banderas), repeatedly plucking away the phrase “I am stuck” on his typewriter, Brian Goodman’s inert Black Butterfly bluntly alludes to one of cinema’s most familiar articulations of writer’s block while ironically foreshadowing its own utter lack of inventiveness. The inelegance of this reference epitomizes a film littered with jarring tonal changes, inexplicable and inconsistent character behavior, and a couple of absurd third-act narrative twists. The fact that Paul writes on his laptop throughout the rest of the film, suggesting that he must have dusted off his typewriter simply to indulge in The Shining cosplay, is a prime example of the carelessness evident in every aspect of Black Butterfly.

Paul lives in a rundown cabin in a remote mountain town where he’s editing a new novel to earn some much needed cash. After an intense drifter, Jack (Jonathan Rhys Meyers), saves him from a threatening truck driver, Paul invites the man to spend the night, and eventually several days, at his place. But Jack almost immediately begins giving off creeper vibes, forcefully inserting himself into Paul’s writing process and somehow convincing him to ditch his novel and write a screenplay based on their own developing relationship. He even goes so far as to imply that the trucker he saved Paul from may have been in on their encounter: a pawn to get Jack through Paul’s cabin door.

The film never reveals why Paul, picking up on Jack’s bizarre tendencies and violent impulses even before being told he’s an ex-con, never once asks the man to leave. Hell, even after Jack has pointed a rifle at him, Paul still doesn’t call for help or simply attempt to escape. Any potential for thrilling cat-and-mouse games is further stymied by a lack of clarity about Jack’s endgame and Paul’s perplexing tendency to never resist Jack’s increasingly dangerous and antagonistic ploys. But even when the first of the film’s plot twists flips the switch on the Paul and Jack’s relationship, as well as calls into question everything we’ve seen and heard up to that point, the men’s behaviors remain every bit as muddied and ridiculous as the grand F.B.I. conspiracy and heaping piles of plot holes that are sloppily added to the story.

Black Butterfly’s undercooked and incoherent turn of events attempt to stupefy us into mistaking its deeply flawed internal logic for ingenuity. While it’s clear that the entire film was constructed for and around this twist, Goodman doesn’t even put in the minimal effort to reverse engineer the first two acts to make sense in retrospect given the new context through which the first hour must be viewed. The filmmaker, instead, chooses to cop-out, rushing toward an offensively dismissive and haphazard finale that lazily highlights the fact that the film was never meant to be anything but a goof-off in the first place. Given this complete lack of concern for narrative consistency, rationality, and cohesion, even a cut to Patrick Duffy alive and well in the shower would have shown more respect for the audience than the embarrassing contrivance the filmmaker leaves us with.