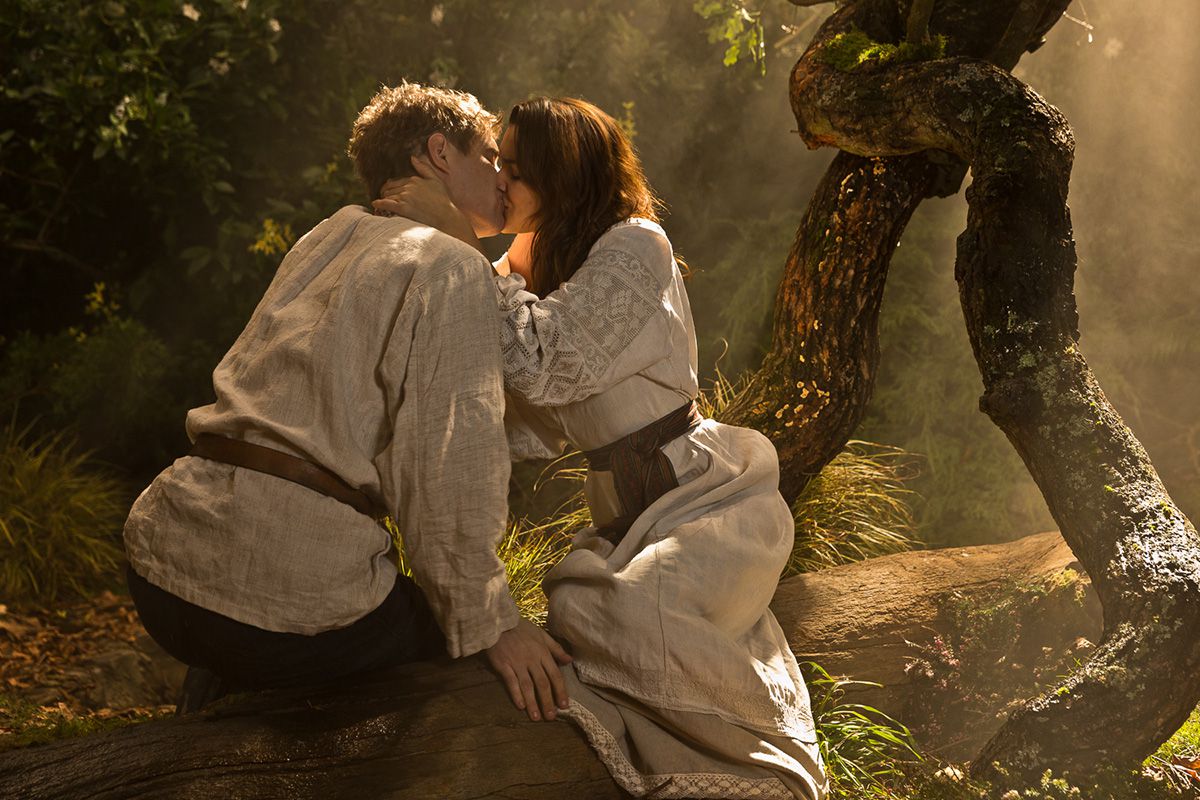 George Mendeluk’s Bitter Harvest is a historical romance set against the backdrop of the Holodomor, a man-made famine that claimed millions of lives in Ukraine in the early 1930s as a result of agricultural collectivization policies imposed by the Soviet government. Soviet authority is personified here by Joseph Stalin (Gary Oliver), repeatedly shown inside the Kremlin as he orders the requisition of the republic’s grain and the crushing of Ukrainian resistance to collectivization—actions he deemed necessary to industrialize the USSR. Given the ongoing military and political conflict between Russia and Ukraine, it’s clear that the filmmakers want viewers to see a parallel between this one-sided relationship and the current tension between Moscow and Kiev.

The film is an awkward mix of swashbuckling love story and polemic, with the battle lines between the Soviet government and the Ukraine painted in very broad strokes. The Ukrainian peasantry is romanticized in line with the film’s nationalist message, their lives seemingly consisting of nothing more than cheerfully harvesting grain, playing rousing folk music, and dancing when not engaged in the first two activities. The film’s first section, which charts the idealized, prelapsarian early years of the Soviet revolution, takes place in an unspoiled paradise of perpetual summer, with peasants revealed to be devout Orthodox Christians who also happen to be worshippers of nature through animistic pagan rituals. So as not to complicate the narrative, the filmmakers have chosen to completely skip over the terror and chaos of the revolution, depicting life before and after the war as a peaceful continuity.

Yuri (Max Irons), Bitter Harvest’s narrator and protagonist, is a gentle Ukrainian peasant descended from famous Cossack warriors, and he wants nothing more than to be an artist and marry his childhood sweetheart, Natalka (Samantha Barks). Like all the other Ukrainians in the film, these two speak with a British accent, whereas the Soviet soldiers speak with a Russian one and are uniformly depicted as being ethnically Russian, though in reality they hailed from the USSR’s many nationalities.

Throughout, the dystopian nature of Soviet interference in Ukraine is depicted visually and aurally in starkly symbolic terms. It’s always winter in Moscow and the orchestral score takes on a sinister tone whenever the Soviets appear, whereas the scenes in the Ukrainian countryside are accompanied by stirring music and are often filmed in slow motion, especially when the filmmakers are intent on emphasizing the landscape’s natural beauty or celebrating the virtuosic horsemanship of the Cossacks. This is meant to contrast the Ukrainian’s oneness with nature with the unnatural quality of Soviet ideology, with its alien and artificial social order and emphasis on industrialization.

The demonic nature of Soviet collectivization, which signaled the end to the edenic period of Ukrainian quasi-dependence in the 1920s, is symbolized in the film by the ruthless atheism of the Soviet soldiers. The Russian communists beat up Ukrainian priests and confiscate religious icons as part of Stalin’s crackdown on Ukrainian self-expression. The film’s strongest moments are those that move away from the nationalist underpinnings of such scenes. Yuri and other boys from his village eventually go to Kiev to study and make art in service of the new communist ideology, and as they navigate this tectonic ideological shift, Bitter Harvest paints a lucid portrait of the dystopian results of the communists’ utopian vision.

Initially painting works of romantic fantasy, Yuri is taught at the Soviet art school in Kiev that the new avant-garde art must deny reality and depict instead the ideals of communism. As millions around him die from starvation and his closest friends are killed by the Soviet authorities, he finds it impossible to abide by this new socialist realist aesthetic that requires him to paint the successes of communism when all he sees around him are its failures. Unfortunately, like Yuri, the film itself indulges in too much romantic fantasy, which ultimately distracts from its noble goal of honoring the victims of the Holodomor and holding accountable those responsible for it.