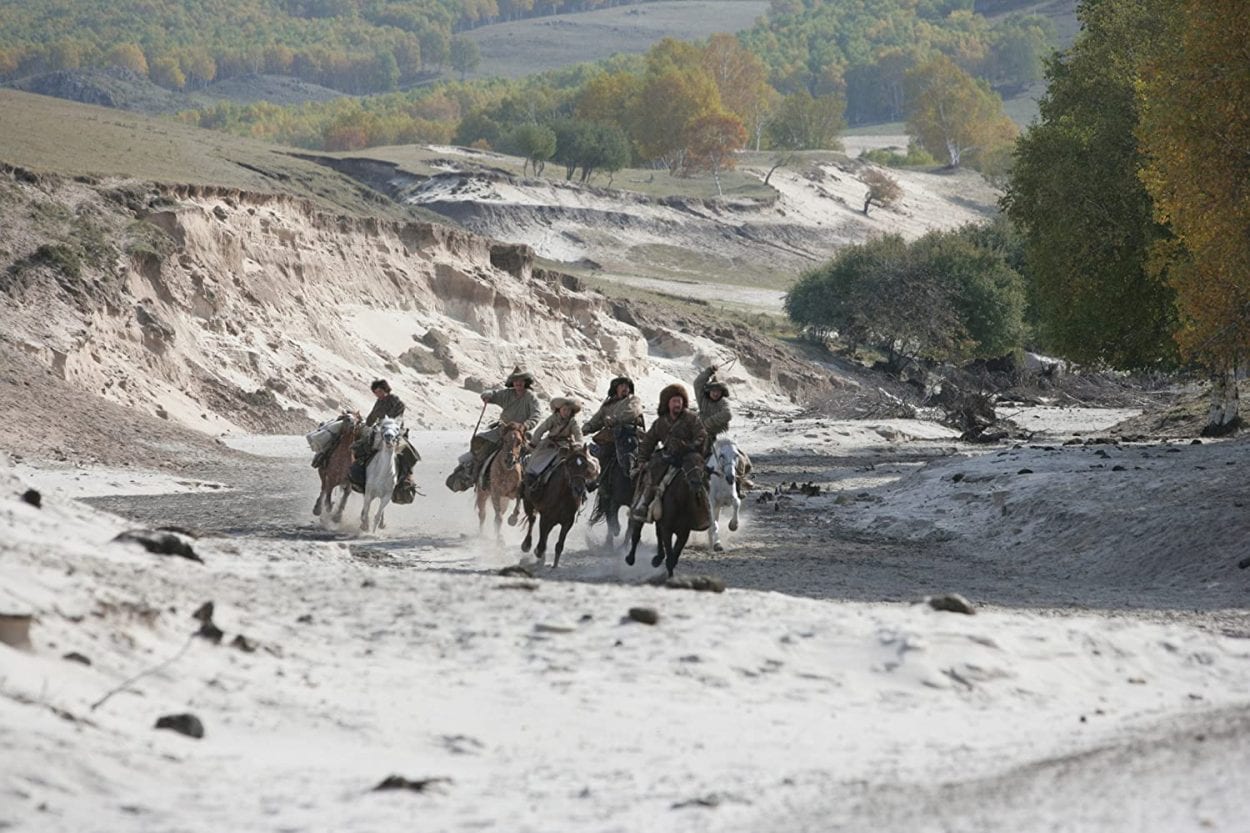 A man and a woman lie on a rug of pelts in an endless green landscape, the steppes of Central Asia, with mountains in the distance. They are newlyweds, they have crept away from the huddle of yurts a couple of miles away for some privacy, and they have just made love. She has long black braids. He is a taciturn type of guy, but he loves his wife. He chose her to be his bride when he was 10 years old, from a rival clan. This comes back to haunt them on their honeymoon, as warriors from her clan gallop on horseback to retrieve her. The spectacle of their appearance in the distance is heart-stopping. There is nowhere to hide. The steppes stretch off in every direction, an endless openness, daunting in its emptiness. The newlyweds race to their horses, leap on, and gallop off away from their love-nest, with the terrifying masked warriors in pursuit, shooting arrows ahead of them, at full gallop (amazing to watch).

Then follows an exhilarating chase, horses and riders flying across the landscape like wild-haired bats out of hell. The newlyweds reach a shallow river and as they gallop through, an arrow from one of the warriors hits the “groom” in the back, and he crumples forward and off the horse. His bride, horrified, with the warriors looming closer and closer in the background like something out of a nightmare, heaves her husband back up onto his horse, and slaps the horse, ordering it to gallop home, with its wounded rider in tow. And of course, by the time this has all come about, the warriors are upon her, lassoing her with a rough piece of rope and dragging her off behind them, her body writhing about in the gravel. This spectacular scene introduces us to a Genghis Khan (played by Japanese actor Asano Tadanobu) we might not be familiar with, with all we know about the man. I would call him the cuddly loving husband Genghis. I knew he was a warrior and a brilliant military tactician. I knew he conquered lands all the way to Poland. I knew he united the various Mongol tribes, creating a fearsome war machine that people throughout that part of the world trembled before. But I guess I didn’t know that, at heart, he was a softie who was also a good lay.

Information about Genghis Khan, in terms of his personal life, is scarce. We know who he was because of what he did and the impact he had on the world. We know the lands he conquered, and those who survived those assaults (and there weren’t many) left their memories of what happened. Colin Thubron writes in his wonderful book The Lost Heart of Asia:

“Then, at the start of the thirteenth century, as Christian Europe ripened and Islamic Asia flourished, the dread steppeland unleashed its last holocaust in the Mongols. This was not the random flood of popular imagination, but the assault of a disciplined war-machine perfected by the genius of Genghiz Khan. Unpredictable as a dust-storm, its atrocious cavalry—neckless warriors with dangling moustaches—could advance at seventy miles a day, enduring any hardship. Only their stench, it was said, gave warning of their coming. In extremes, they drank from the jugulars of their horses and ate the flesh of wolves or humans. Yet they were armoured in habergeons of iron or laminated leather scales, and they could fire their steel-tipped arrows with magic accuracy over more than two hundred yards at full gallop. Consummate tacticians and scouts, they soon carried in their wake siege-engines and flame-throwers, and around their nucleus of ethnic Mongols rode a formidable mass of Turkic auxiliaries.

“By Genghiz Khan’s death their empire unfurled from Poland to the China Sea. Within a few years his sons and grandsons came within sight of Vienna, laid waste to Burma and Korea, and sailed, disastrously, for Japan. Meanwhile, in their Central Asian heartland, the Pax Mongolica was instilling administrative discipline, commercial recovery, and a frightening peace.”

But Mongol, the film directed by Russian director Sergei Bodrov, is interested in why Genghis Khan (or Temudgin, his real name) became “Genghis Khan (TM)”. The majority of the film takes place during his early years, from childhood to young man, when his character was solidified. The film ends with an apocalyptic battle on a plain between two rival Mongol clans, which leaves Genghis the winner. It will be his job to pick up the pieces (which he obviously did before fanning out to conquer other places) and build a nation from that newly unified group. Genghis’s later years of dominance over Central Asia and beyond is not covered. Bodrov, a Russian, was interested in filming the story because Genghis Khan is portrayed as a villain in Russian elementary school textbooks, and Bodrov grew up thinking of Genghis as Enemy #1. Because of the Mongol invasion, Russia was cut off from the European Renaissance, which had long-lasting consequences for their culture. Bodrov wanted to flesh the man out, see where he came from, what his motivations were.

Mongol was filmed in China, Mongolia and Kazakhstan, all places where Genghis Khan had actually ridden and lived and fought in the 12th century. The scenery is breathtaking and filmed with astonishing beauty by cinematographers (there were two) Rogier Stoffers and Sergey Trofimov. What you are looking at is the real deal. It’s more frightening than beautiful, though, because of the lack of cover. When the opposing warriors approach on horseback, appearing across the horizon in a seemingly endless horizontal line, it’s a terrifying sight. Where would you go when faced with that? There is nowhere to flee to. The emptiness of that landscape cannot be overstated.

Ironically, despite all the best intentions, I think the personal scenes are the weakest in the film, cliche-ridden, and very general. It’s a sketch, a script trying to show the personal origin of huge world-shaking events. For example, at one point, Genghis’s wife (Khulan Chuluun) says, “The Mongols have no laws. They have no unity.” And so the lightbulb goes off over Genghis’s head and he says, “I know! Let me bring the Mongol clans together and create some laws!” I found myself wishing for less psychoanalysis and more action. I was not all that interested in having his motivations spelled out. It was enough to know that clans were at war, the Mongols were spread out over a vast steppeland with no central authority, and that Genghis Khan’s blood-brother (played by the wonderful and expressive Honglei Sun) had risen up into a feared and strong enemy. That much is clear, and pretty much all I need to know in a movie like this, which is a sweeping epic in the grand tradition. Seeing Genghis Khan having sex and playing chase with his daughter seems superfluous in such a story, although I can understand Bodrov’s impulse.

But the battles are worth the price of admission. I was stunned and impressed. Bodrov may have wanted to humanize Genghis Khan, but what I was left with was admiration, awe, and fear for who he was as a military leader. I yawned through the sex scenes and the domestic scenes, and found myself yearning for those masked guys to leap on their horses again, and gallop towards each other across the steppe, arrows flying through the air, blood spurting out behind the horses in a slow-motion fan of carnage.

If there was CGI used in this film, it was unobtrusive. I felt that what I was looking at was something real, even the vast overhead shot of the two massive armies rushing at each other across a huge expanse. It’s no secret that the Mongols were (and are) incredible horsemen, and Bodrov filled out the armies on both sides with stuntmen from all over Mongolia and Kazakhstan and the other Central Asian nations. The final battle is fantastic because it manages to show, in the midst of thousands of horsemen and arrows and flame-throwing galloping warriors, that it was Genghis Khan’s military expertise and creativity on the battlefield that made him the clearest alpha male of all the Khans vying for position. It was not an equal battle. There were a thousand men on one side, a couple hundred on the other. But through various feints and deceptions, Genghis’s smaller side got the advantage. The action is visceral, fast, exhilarating, and awful. The horsemen are beyond belief.

Budrov may have wanted to flesh out Genghis Khan and I suppose he did, ham-fisted dialogue and all, but seeing him in cuddly, fatherly, husbandly moments did nothing for me in terms of understanding and sympathy. To me, the sight of the galloping masked warriors, each one holding two curved swords behind his back, elbows crooked up askew, their postures showing a strange awful stillness even at full gallop, the windy endless steppe launching itself off on every side, is my take-away from the film. I cannot get that image out of my mind.