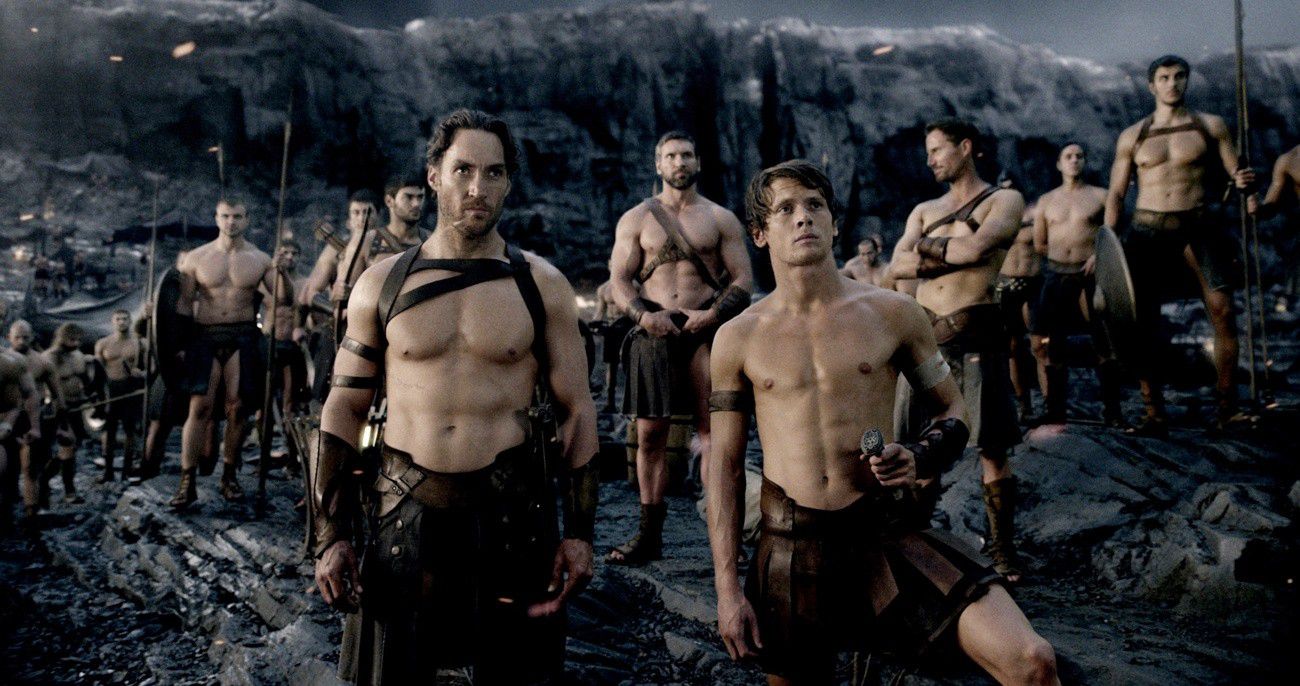 The audience-flagellating green-screen aesthetic of the first 300 seems novel compared to the legions of knockoffs that have come down the pipeline since. Noam Murro’s follow-up, 300: Rise of an Empire, leaves no doubt of the original’s influence, but to watch it is to sit dumbstruck at the cynicism of Hollywood bean counting. Murro’s film is unable to pursue any narrative or philosophical questions launched by the denouement of the original because Zack Snyder posed no such questions; instead, it can only adorn itself with a salmagundi of motifs and tics left over from its predecessor, a means of telling this type of pseudo-history with as much franchise consistency as possible. (Its first shot is actually one of Snyder’s now-iconic panoramas of dead Spartans from the final minutes of 300.)

Rise of an Empire curiously manages to be both prequel and sequel. The flinty, grunting Greek general Themistokles (Sullivan Stapleton) rallies a band of blue-caped warriors to ward off the Achaemenid (read: Persian) offensive mounted on Athens, in parallel to 300’s depiction of the infamously lopsided northern attack on Thermopylae. When Themistokles receives word of the fallen Spartans, he consolidates his attack on the Persian boats in the Aegean Sea in retaliation—for honor, for Greece. The politics of Snyder’s film—an idyll of militarization, threatened unfairly by an invading Brown Menace—make even less sense applied to the Athenian predicament: As if Xeroxing the fallen Spartans, Themistokles insists that a smaller number of Greeks fighting more desperately against their Persian invaders can only be a good thing, a bloody litmus test of nationalism.

While the eight-foot-tall, gold-festooned Persian emperor Xerxes (Rodrigo Santoro) returns in a largely bookending capacity as villain, the real power behind the throne is revealed to be his adopted sister, Artemisia I (Eva Green). Green’s sardonic elocution and overabundant black eyeliner occasionally topple Murro’s film into a kind of transcendent post-camp, the severity of the character’s grudge against Athens underlined in an early scene where she makes out with a severed Greek head to prove her ferocity. Stacked against Stapleton’s dutifully irony-free performance (all lunging and bellowing), it’s not hard to see where the film could have been saved, or at least made more unique, by its own salaciousness. When Themistokles boards Artemisia’s ship to negotiate a ceasefire, she seduces him, and a scene that alternates between sex and fighting ensues that’s more thrilling for its promise of seeing two actors share the same tangible, if stagey, set. It’s the first time the film risks its visual palette to rely on script and performance.

The encounter lays bare that Rise of an Empire has heretofore been a humorless, visually and psychologically pallid trudge, mostly made up of assaultive exposition. There are subplots, side-characters, flashbacks, tableaux, vast battle sequences and montages, but actual person-to-person scenes are practically nil. Green’s effort to leave a lasting imprint of personality on the proceedings is admirable, but Stapleton’s Themistokles proves a deadeningly empty hero. Post-coitus, Artemisia invites Themistokles to betray Greece and join her, but he refuses and so she kicks him out. The next day she wages her cruelest campaign yet, and neither Themistokles nor the film seem aware that the Greek general’s men have been led to slaughter in exchange for a few sweaty minutes with Artemisia. Murro gives the film nothing so much as a hit-refresh on the same glistening, impossibly golden and gray flecks of pixel-barf that have invaded the frames of every tent-pole studio release since the Bush administration. But there’s a difference between capturing epic images, and making boring ones epic in post-production.