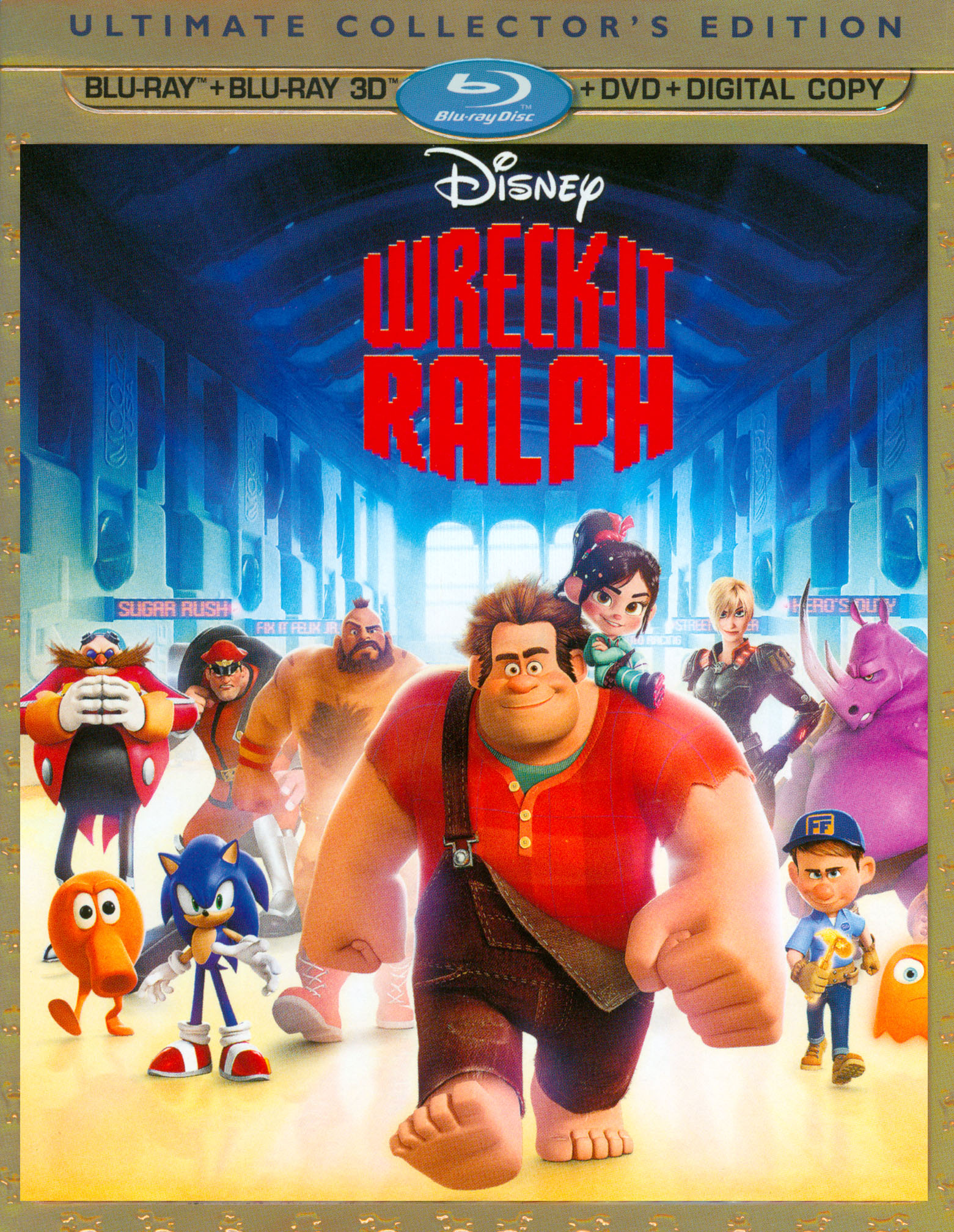 The titular good-hearted “bad guy” of Rich Moore’s Wreck-It Ralph spends his days, as you might imagine, wrecking things as an arcade-game villain, primarily a large condo that’s maintained by Fix-It Felix (Jack McBrayer), a small Super Mario proxy equipped with a magical golden hammer. As voiced by John C. Reilly, Ralph is a lovable clod made to assume the role of villain, which the filmmakers crudely utilize to advance a theme of class warfare: Ralph does the dirty work while Felix and the other condo residents enjoy the comforts of easy living, ignoring his plight.

It’s an interesting enough setup for a film concerned, at least on the surface, with identity and roleplaying, concepts that partially define gamer culture. The loneliness and alienation that leads Ralph to leave his game in search of a symbolic medal in the other games that fill up the arcade is similar to what leads many to become obsessed with video games in the first place. But Moore, along with scripters Phil Johnston and Jennifer Lee, shows only a passing interest in gamer culture, seeing fit to condescend with an endless line of sight gags and gusts of geek-chic nostalgia.

Indeed, it’s not too long after Sonic the Hedgehog shows up in an expository PSA that one is reminded that the Mouse is most definitely in the house, and that Wreck-It Ralph is nothing more than an attempt to reach out to a market that often uses Disney as the proverbial dartboard at which to hurl blame for various instances of social or cultural rot. Ralph’s journey, which begins in the Gears of War-esque Hero’s Duty and ends up in a Mario Kart-like racing game called Sugar Rush, is an involving one, and Reilly’s hugely inviting voice helps keep things moving, but the film feels calibrated in every single sequence to promote universal inclusion, to seemingly relate to the needle but never at the expense of the hay that surrounds it.

Most of the film takes place in Sugar Rush, wherein Ralph enters into a pact with the game’s alienated “glitch,” Venellope (Sarah Silverman), to get his medal and get her quite literally back in the game by competing in the main race, against the wishes of King Candy (Alan Tudyk), the game’s cheerfully malevolent host. Ralph’s problems are displaced by Vanellope’s, but the filmmakers never see fit to develop Vanellope or further develop Ralph in relation to either of their issues, leaving a great deal of the second act feeling lethargic, even pointless. Even the technically stunning climactic showdown feels unfocused, conflating Ralph and Vanellope’s plot with Felix’s budding relationship with Calhoun (Jane Lynch), a mercenary from Hero’s Duty who’s hunting down a renegade “bug” from her game. And the addition of Calhoun and Felix’s odd romance speaks to the busy yet hollow “It’s got it all!” mentality of the market-tested screenwriting.

The amount of licensing and product placement that pops up throughout the film, though astounding in volume, is ultimately a secondary concern, as the film’s ultimate flaw is in its very narrative. The fact that Felix and the residents of the condo treat Ralph like trash isn’t treated as a fault in them, but rather a condition that Ralph must get accustomed to; the humble Ralph must become even more modest before his pious neighbors should show any amount of empathy. Meanwhile, Vanellope eventually triumphs with help from Ralph, but her ascension is largely via divine right, as she’s revealed to be Sugar Rush’s intended protagonist, edged out by the furious and greedy King Candy. Essentially, the film deploys Ralph as a congenial pawn for the elite, only to then package him as the film’s working-class protagonist.

If Ralph is ultimately the saddest character of the bunch, the most haunting and substantial character is King Candy, who benefits greatly from Tudyk’s myriad vocal talents. Candy is eventually revealed as to be Turbo, the main character from one of the arcade’s first games (cue Road Blasters reference) who crossed over and took over other games due to his own jealousy and need for attention. Turbo’s forceful, poisonous sense of neglect mirrors not only the curdled nostalgia of 8-bit systems like Atari or the original Nintendo, but also the inherent distrust and anger felt by many corporations in relation to the new and the genuinely inventive. Reilly’s lovable Ralph is on the poster, but Turbo is the true face of Wreck-It Ralph, a bitter mediocrity that doubles as Disney’s flummoxed retort to Pixar’s Dear John letter.

The heinous narrative conceits of Wreck-It Ralph are softened immeasurably by the astounding technical work, and Disney’s A/V transfer lends startling clarity to the look and sound of the film on Blu-ray. Rich Moore uses an impressive variety of colors and they all pop, from the shiny blacks and neon greens of Hero’s Duty to the reds and browns of Ralph’s outfit, and the black levels are rich and inky. The sense of texture and detail is outstanding, especially in the world of Fix-It Felix and the wardrobe. The audio is equally astonishing, especially considering the number of auditory gags that nearly clog up the film. Dialogue is clear and out front at all times, with Henry Jackman’s zippy score, an overwhelming amount of effects, and a few pop tunes balance nicely in the back, including the intensely awkward use of Rihanna’s “Shut Up and Drive.”

One of the more annoying elements of Disney’s recent Blu-ray releases is the Intermission feature, which deploys a featurette every time the film is paused for longer than five seconds. In this case, Chris Hardwick appears to discuss some of the more elusive visual gags in the film and its gaming touchstones. It speaks, again, to Disney’s interest in busyness over substance, as a featurette on how the film is connected to gamer culture would have been genuinely interesting. Instead, there’s a decent-enough making-of featurette, and some goofy-enough alternate and deleted scenes. Paperman, the utterly winning and Oscar-winning short by John Kahrs, is also included and, in many ways, overshadows the feature its bundled with. In fact, even the enjoyable fake commercials for the games featured in the film feel more substantial than the film itself.

Disney’s desperate and wrong-headed riff on Toy Story gets an expectedly excellent A/V transfer on Blu-ray with a bundle of extras that offer a few bonus points.