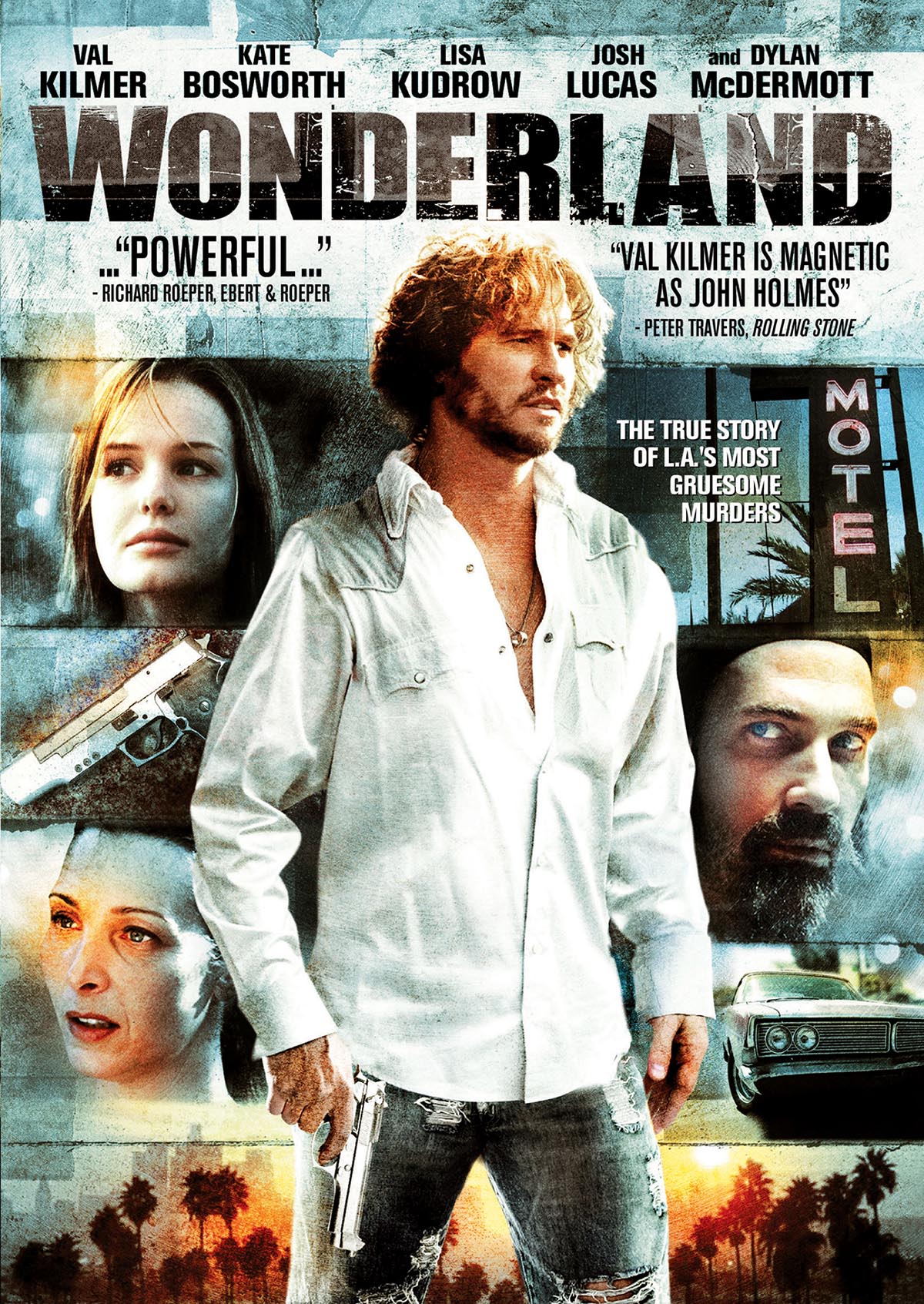 During the summer of 1981 in LA’s Laurel Canyon, on an avenue called Wonderland, four people where savagely killed, and one-time porn king John Holmes was implicated in the slayings. Having spiraled off into a ferocious drug addiction and finding his already damaged life breaking apart under the weight, Holmes fell from the questionable heights of the adult film industry and became involved with what might most delicately be described as “undesirables,” the Los Angeles criminal element of pushers, thieves and psychopaths. The murders were believed to be retribution for a robbery that several of Holmes’s associates carried out against Eddie Nash, resident lord of the underworld, and if Holmes’s complicity in the theft was always relatively clear, his involvement in the murders, if he had any at all, was not. At the heart of Wonderland is a mystery that director James Cox attempts to develop through a full scale Rashomon-style investigation of the uncertainty of “truth.”

The murders on Wonderland Avenue are the focus point of a series of spiraling perspectives, each embedded within the “seeking” format of the detective film and set in that all too familiar undead Los Angeles. Save for its basis in historical reality, there is little that is original in the visualizing of Wonderland’s underbelly tour of compromised lives. The filmmaking favors film-school tics—a calculatedly retro soundtrack that blatantly and commercially courts the film’s 1981 setting, clumsy film speed manipulations, cartoonish split screen effects and generally garish, over processed stock—that emphasize style over content. This style is little more than one cliché after another, a few pages torn out of the young, “hip” filmmakers guide of how to paint a picture of life on the edge.

What the filmmakers fail to understand is that it isn’t enough to show a room full of bug-eyed people maniacally snorting cocaine and freebasing, yelling at one another, brandishing guns and doing it all before a cinematically fashionable backdrop of a dead city, and then assume that they have perfectly captured the essence of chaotic decadence. This is particularly true considering that the film is supposedly attempting to report on actual events. Besides the soundtrack, the cars and the clothes, there is little that ties Wonderland to any specific place and time, to ground it in what could have been a revealing “realness.”

Wonderland might as well be another Boogie Nights, a film itself inspired in part by the Wonderland robbery and killings. But as a work concerned with fact, Wonderland has a certain responsibility to contextualize those truths with more respect, a responsibility which is less a documentary expectation than a sensible artistic choice. There’s little doubt that Cox wants to leave viewers affected by the emotional depth in Holmes’s story, but when his film wears its vulgarity on its sleeve, the whole work ends up feeling far more exploitative than exploratory.

There’s one aspect of the film to be singled out, though, if one can bypass the off-putting surface, and that is Val Kilmer’s depiction of Holmes. Kilmer not only manages to make something of nothing, but at his best he almost succeeds in redeeming the gaudy expressionism of Wonderland with his interpretation of Holmes’s unnervingly palpable desperation. As the broken king of adult cinema, Kilmer babbles and charms and frightens, looking pathetically consumed and eaten away yet viciously driven by his appetites. Without his epileptic performance, Wonderland would be little more than a particularly unappealing late-night freak show.

Wonderland is a noisy, music video wankfest with zero personality. Pardon the puns, but while the film sucks, the image looks great (though you’ll have a hard time noticing considering how quickly the film moves) and Dolby Digital 5.1 surround is sure to blow a hole in your speakers.

Skip the film altogether and go straight to disc two. Wadd: The Life and Times of John C. Holmes says it better than James Cox did.

Interview with the Vampire Review: A New Lease on Eternal Life