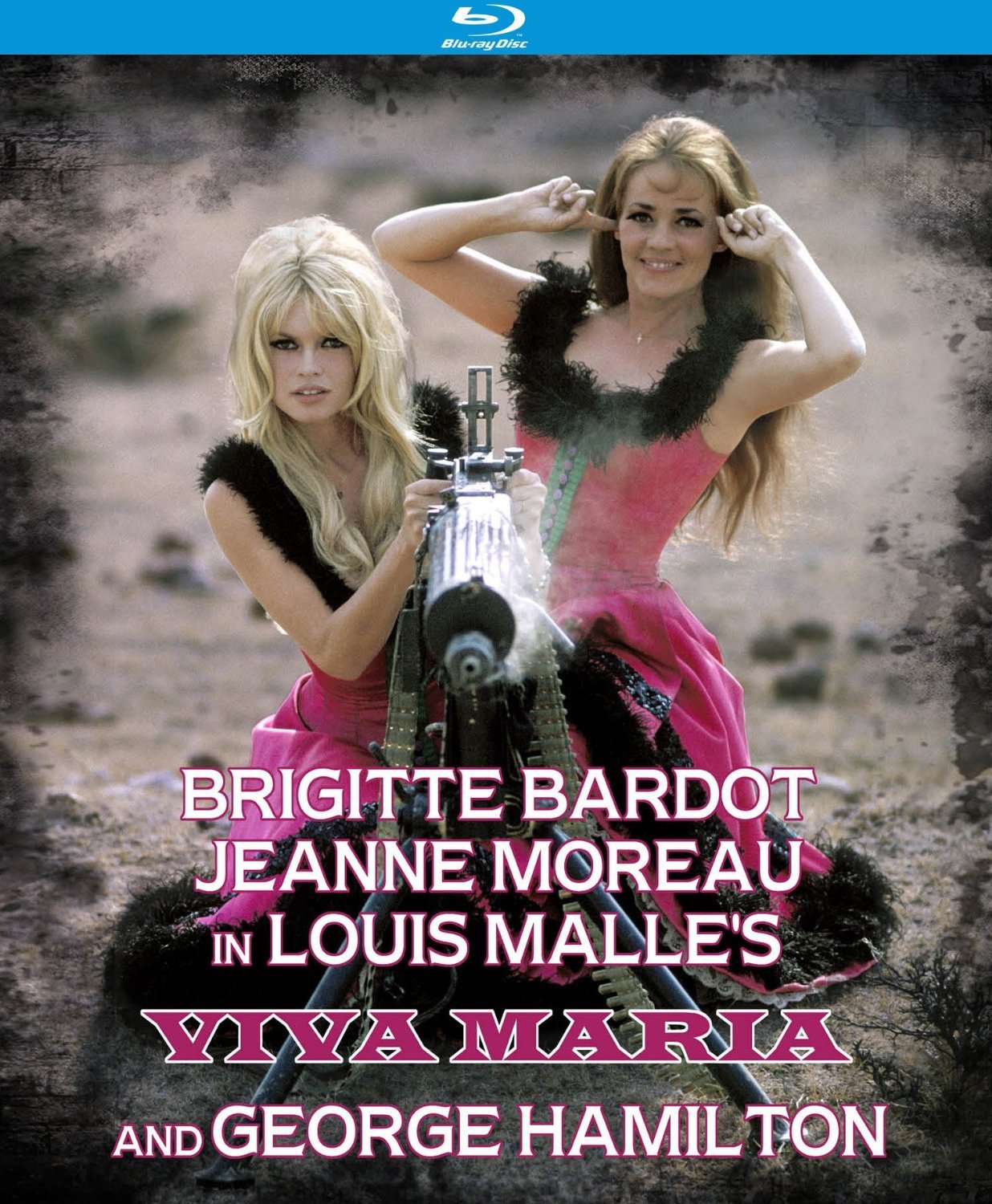 Louis Malle’s Viva Maria saw the director at a crossroads, which is where his film more or less begins, with Irish-born terrorist Maria I (Brigitte Bardot) fleeing capture in 1907 Central America after blowing up a bridge. Bardot waddles through the swamps, wearing a hat seemingly snatched from Jackie Coogan in Chaplin’s The Kid, a fitting visual marker since Bardot becomes the “kid” herself as protégé to Maria II (Jeanne Moreau), a mentoring showgirl of whom Bardot asks: “Is acting an interesting life?” Were Malle intent to chart this reflexive query through the visual archetypes of classical cinema as initially suggested, Viva Maria would mirror Godard’s A Woman Is a Woman, appropriating the form of a Panavision western, instead of a musical, in order to implode it.

But this is 1965 and the impending swell of political unrest in France meant such formal games were over, which is likely why Malle and co-writer Jean-Claude Carrière (along with notable assistant directors Volker Schlöndorff and Juan-Luis Buñuel) decide to cherry-bomb everything from revolutionary politics to celebrity-obsessed media to sex-as-death shenanigans. In short, Viva Maria is an extravagant mess, with Malle shirking the quieter, poetic spaces of 1959’s Elevator to the Gallows and 1963’s The Fire Within for a full-blown carnival, resembling something like David Lean as filtered through anarchic, late-nouvelle vague sensibilities.

The film’s first third is devoted to “Las Marias Desnudas” becoming a popular traveling act, but that ceases after they’re accosted by a group of banditos, who imprison their clan in the dungeon of a local villa. There, Maria II becomes infatuated with Florès (George Hamilton), a local rebel whose vocabulary only knows one, concluding word: “revolución!” The prisoners face Rodríguez (Carlos López Moctezuma), a sneering braggadocio whose lechery is topped only by his proclivity for adorning every space of his florid abode with an invaluable piece of art. Malle has fun countering Moctezuma with Bardot as a weapons savvy revolutionary (she fixes ammunition errors and fawns over a large machine gun in Rodríguez’s bedroom), to serve as a corrective for failed displays of hyper-masculinity.

When Rodríguez brags about being “the only man within 50 miles to have electricity,” the faulty exhibition leads him to viciously fire rounds at faceless workers below, whipped as the bullets bury into the ground beside their feet. In a comparable moment, Rodríguez pursues the two women around his bedroom, but he ultimately stumbles into and gropes a Greek bust rather than the bosoms of either leading lady. These are pretty typical gags for the film, which in these moments is closer to proto-Mel Brooks than Godardian genre-fuck. But then, Malle was never the radical formalist; he instead prefers content revisions, like instantiating Moreau as matriarch, with more than a little influence from Johnny Guitar and Forty Guns driving his insistence.

Malle has a sharp compositional eye; the frame literally spins out of control in a scorching two-shot with Bardot and Moreau walking side by side toward the camera, expressing the film’s interest in explosive celebrity being juxtaposed with cartoonish, dictatorial buffoonery. It’s the seed for a theme that would become endemic to more rabidly scatological-as-political fare in the 1970s, most notably Dušan Makavejev’s Sweet Movie, which aligns Snow White, Marlon Brando, and Vladimir Lenin in one particularly outlandish sequence.

Malle uses Hamilton’s masculine persona not for a gun-spinning, John Wayne-type, but a wounded compañero whose ability to effect change must ultimately be deferred to Moreau’s rabble-rousing theatrics. Knives come from underground, bullets are pulled from growing stalks of corn, and a pistol is unholstered from a baby’s blanket. Violent revolution is a satirical farce for Malle and Carrière, as gunshots and canon fire dominate the film’s soundscape for nearly 30 minutes of an extended dénouement, but we’re less in Howard Hawks territory than an abstract sense of screen space and warfare, a style emblazoned the same year by Godard’s Pierrot le Fou.

Yet Malle not once takes the bloodshed seriously, such that his farcical leanings ultimately hinge themselves to hollow understandings of actual sacrifice, rooted more to the characteristics of formal genre critique than understandings of self-sacrificial, colonial strife; any significance on this front drowns in the film’s excesses. As a political film, Viva Maria looks positively naïve next to something like, say, Mikhail Kalatozov’s I Am Cuba. Given the ultimately troubling preoccupation with basic genre reversals, a proper legacy for Viva Maria would also include its influence on Django Unchained, such that Leonardo DiCaprio’s Calvin Candie is undoubtedly modeled from Moctezuma’s cultured-but-crazed patriarch, though Tarantino predictably dropped the gender dynamics.

The new Blu-ray from Kino Lorber is a nice improvement over MGM’s 2005 DVD, but problems remain. Although the image has been noticeably restored in terms of brightness and saturation, Kino has made little effort to eliminate pops, specks, cracks, and tears throughout the transfer. These issues are most notable at the film’s beginning and around reel changes (there’s an especially visible bit of debris during Maria II’s seduction of a chain-bound Florès), but overall, any comparable, distracting detriment remains minimal. When at its best, the image is vibrant and clean as intended. Sound fares much better, likewise with a pop here or a hiss there, but largely free from flaws to adequately service the film’s numerous musical numbers and gunshots.

All that’s provided is the film’s theatrical trailer, which is seemingly determined to set the record for the number of times “viva!” can be shouted in a three-minute span.

Viva Maria deserves rescuing as more than simply a curiosity within Louis Malle’s diverse oeuvre, but Kino Lorber’s new Blu-ray provides nothing by way of historical or analytical support for that endeavor.

Blu-ray Review: The Complete Jacques Tati on the Criterion Collection