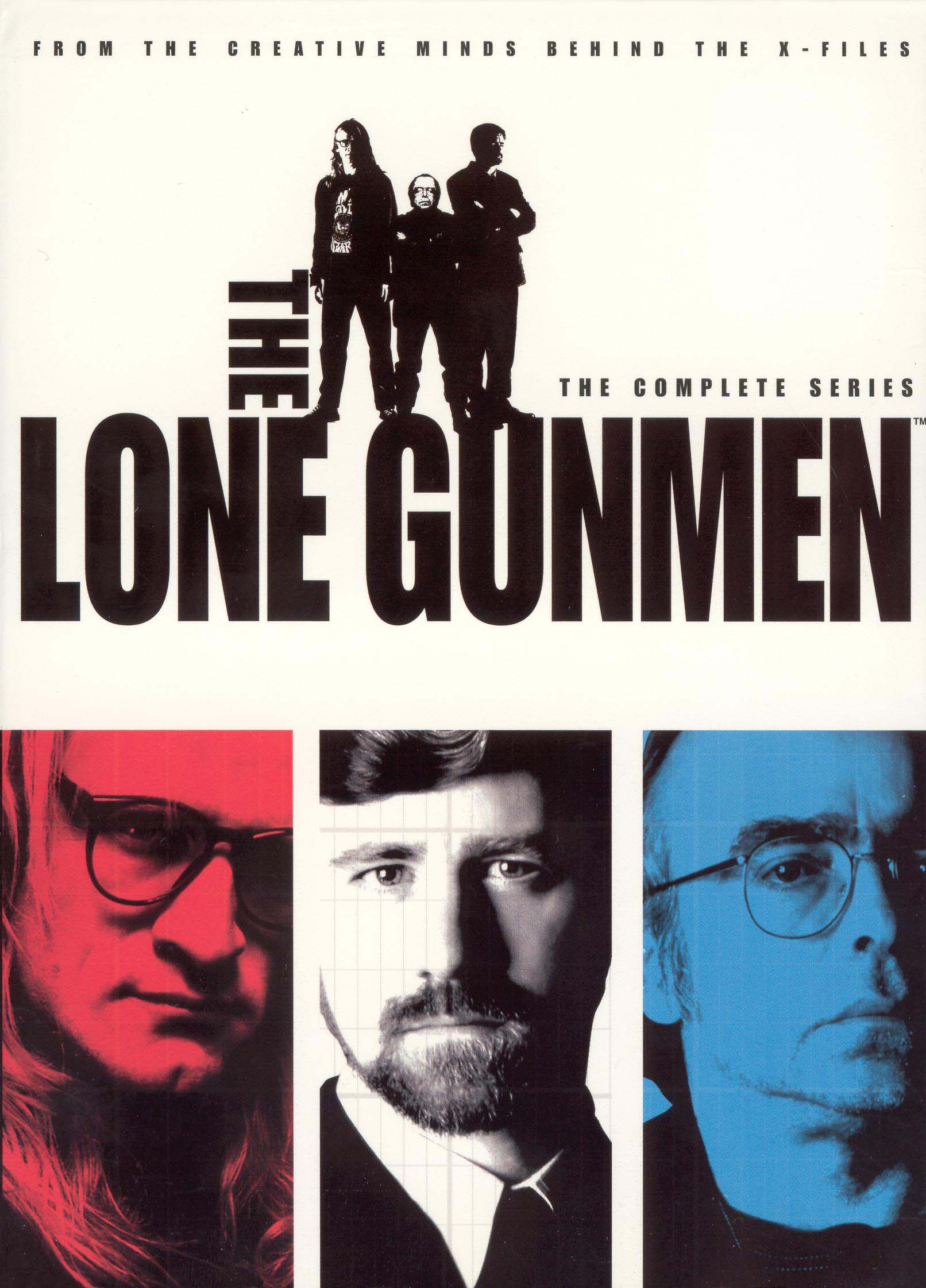 For all its reliance on ribald slapstick humor and dissonant Sturges-like pratfalls, The Lone Gunmen series is finally exemplified by an overwhelming sense of defeat. “I know you and your friends are fighting for the American dream. Just don’t expect to win,” says Bertram Byers (George Coe) to his son John Fitzgerald Byers (Bruce Harwood)—one-third of the titular trio that also includes Richard “Ringo” Langley (Dean Haglund) and Melvin Frohike (Tom Braidwood)—in the series’s “Pilot” episode. His sentiment prefigures the group’s ultimate fate (killed off defending the country they love in a ninth-season episode of The X-Files) though it also acts as a verbal distillation of the thematic backbone that unites The Lone Gunmen with the three other Chris Carter-produced series (The X-Files, Millennium, and Harsh Realm) that came of age during, commented on, and critiqued the über-paranoid Clinton era.

Each series is defined by a grim and fatalistic narrative arc that ends with their respective lead characters dead, on the run, or stuck in perpetual limbo, conclusions not always dictated by creative choice as Carter’s work was so often subject to the business-obsessed pitfalls of network television. Yet, in retrospect, the four shows’ complementary, ultimately pessimistic tenor appears more or less intentional, with the nine-season long X-Files acting as an encompassing membrane within which the actions (both literal and thematic) of its three sister series consistently circle and collide. As such, The X-Files’ bittersweet hotel room finale—in which Carter’s ever-elusive, multifaceted “Truth” is finally revealed via a declaration of hope between two people facing dour and inevitable certainties—effectively sums up the profound sense of individualist struggle inherent to Carter’s televisual quartet, though where the other series treat their various themes with the utmost solemnity, The Lone Gunmen prides itself on offering up more broadly comic visualizations.

It should be pointed out that the Gunmen were initially the creations of writers Glen Morgan and James Wong, who introduced the trio in the first season X-Files episode “E.B.E.” and, during that series’s fourth season, nearly killed off Frohike at the end of the seriocomic “Musings of a Cigarette Smoking Man.” Show producer Frank Spotnitz and several other staff members registered their dislike of this ending and rumors still abound that the footage of Frohike’s death was intentionally “lost,” paving the way for insertion of the now alternate conclusion where he survives. Spotnitz has since admitted in interview and commentary (at times stated within this set) that he saw potential franchise opportunities in the trio, and at its worst The Lone Gunmen spin-off series reeks of the misguided acumen of the monetarily-minded.

More often, the 13-episode series is a wildly uneven enterprise, fluctuating between philosophical complexity and juvenile simplicity to such an extent that it might best be explained as first-year jitters that would have been tamed in subsequent seasons. Indeed, two of the series’s later episodes (“Tango de los Pistoleros” and “All About Yves”) are clear masterpieces that hint at the superb emotional balance of comedy and tragedy that might have been. From a conceptual standpoint, the preceding episodes are never less than daring, an eclectic grab bag of everything-plus-the-kitchen-sink moments that include a blind football league, villainous German hausfraus, midget wrestling, and a super-smart chimp with the high-falutin’ vocal intonations of that forever Equalizer, Edward Woodward.

The only complete and painful failure is, surprisingly, Carter’s solo-scripting effort “Three Men and a Smoking Diaper,” a two-years-too-late Clinton parody that trades in flat-footed flatulence and urination gags to distract from its sentimentalized view of the American political process. Funny that this installment follows the superb “Like Water for Octane,” in which even the shopworn “that’s not a cow, that’s a bull” jest takes on some deep-felt multilayers; it shows that even the lowest comedy, with the right execution, can offer incisive commentary on the world we live in.

Incisive doesn’t even begin to describe The Lone Gunmen’s most controversial narrative element. Originally aired during the spring of 2001 (and shot nearly a year before airdate), the series’s “Pilot” concerns a plot by government-funded terrorists to remote-fly a plane into New York City’s World Trade Center. Carter’s creations have always possessed something of a freakish clairvoyance (much in the way that life and art often parasitically feed one off of the other), but the sheer similarities, in this case, between the fictional and the actual make for particularly discomfiting viewing, offering up a vision of an alternate universe where a real-world tragedy is miraculously averted at the last second. It might have been offensive in retrospect were it not for Carter’s characteristic preference for quiet heroes, persons—like The Lone Gunmen—who give willingly of themselves for a great moral good while consistently being denied any recognition of their efforts.

Like The X-Files’ Mulder and Scully, Millennium’s Frank Black, or Harsh Realm’s Hobbes and Pinocchio, The Lone Gunmen are unlikely heroes who remain marginalized even in victory and so must find solace within themselves and with each other. A key scene in the “Pilot” has Byers and Frohike conversing and reminiscing among junkyard wreckage, an image that emphasizes the oppressive historical weight that burdens many a Carter protagonist, each surrounded in their lonely presents by numerous pasts discarded or never explored, and facing a future that (aside from an inevitable mortality) remains forever, frustratingly uncertain.

The Lone Gunmen comes to DVD on three double-sided single-layer discs, with all episodes presented in a 1.78:1 anamorphic aspect ratio. Consider this my penultimate mention of that atrocious transfer of the “Triangle” episode on The X-Files – The Complete Sixth Season and happily note that The Lone Gunmen in no way falls victim to the ignorant whims of the Fox Video department. (Will you cheap corporate shills just remaster the damned episode ferchrissakes?) The English and Spanish Dolby Surround audio tracks do ample justice to the show’s many comedic stinger sound effects, and the Jimi Hendrix-sampling theme song simply stirs the soul and rocks the eardrums! Also offered are English closed captions, as well as English and Spanish subtitles.

First up is The X-Files episode “Jump the Shark,” a much disliked series finale for The Lone Gunmen that this critic finds more or less superb, taking, as it does, Carter’s obsession with quiet, selfless heroes to a bitter, yet profoundly tragic end. Audio commentary (ported over from The X-Files – The Complete Ninth Season box set) is offered on “Jump the Shark” as well as on four episodes of the series proper (“Pilot,” “Bond, Jimmy Bond,” “Tango de los Pistoleros,” and “All About Yves”). The commentaries alternate between the show’s principal cast and its writers and directors, the best of which is on the “Pilot” episode where the narrative white elephant (aka: 9/11) is talked about with admirable honesty and openness. Such directness extends to the featurette “Making of The Lone Gunmen” where the producers and the cast talk about select episodes and show intimations of understandable bitterness at the series’s early cancellation. Four television spots round out the set’s extra features.

Ignore Fox Mulder’s mantra: You can trust The Lone Gunmen.

DVD Review: The Private Lives of Elizabeth and Essex on Warner Home Video