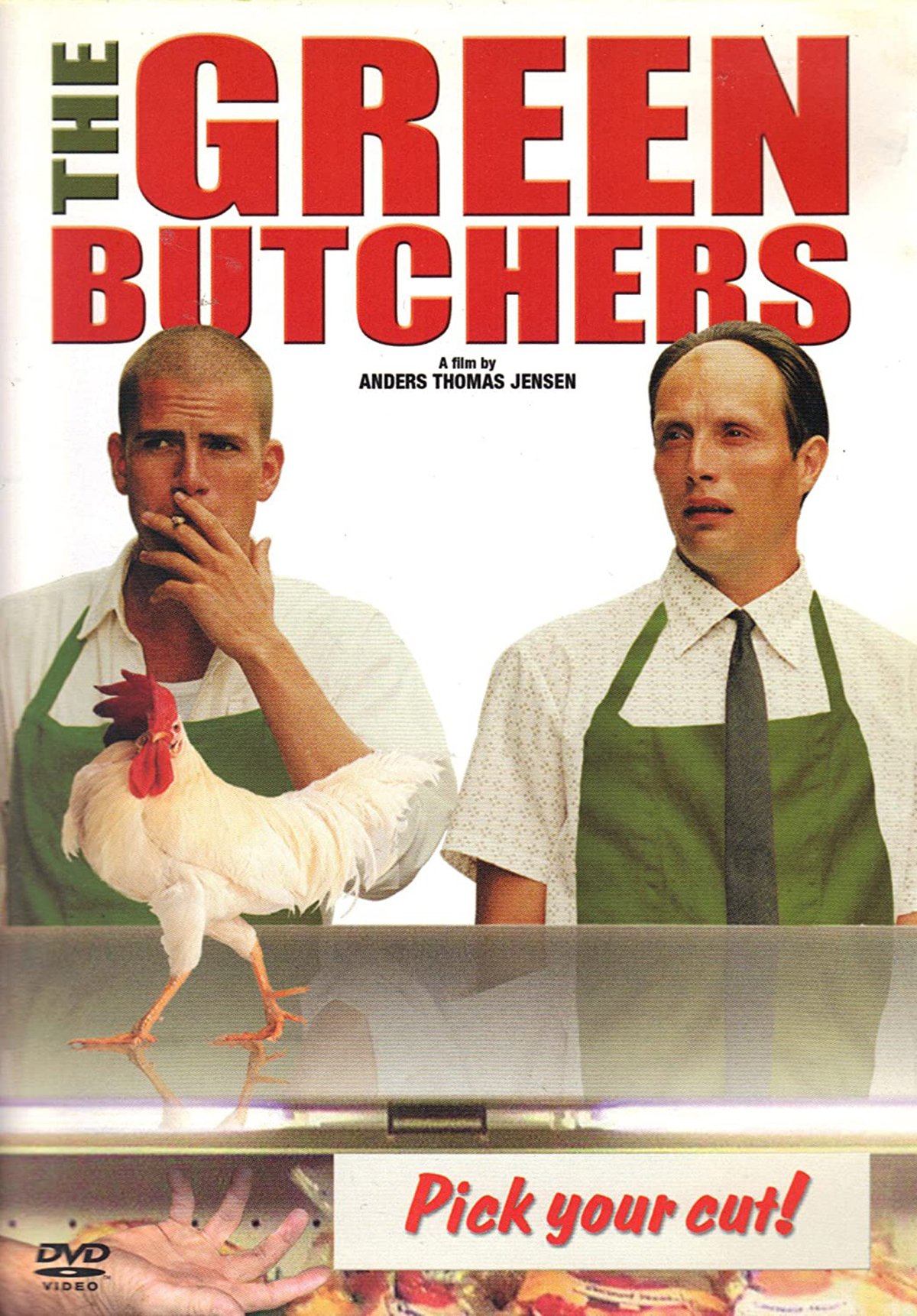 A skilled observer of the wear and tear to the human condition, Anders Thomas Jensen was responsible for penning some of the more memorable films of the Dogme movement: Mifune, the undervalued The King is Alive, and most recently Open Hearts. Anyone who’s seen Lone Scherfig’s Wilbur Wants to Kill Himself knows that Jensen loves to make comedy out of human misery, but not unlike Elaine May, he never condescends to his characters or trivializes life. That’s because Jensen is genuinely concerned with the way people connect with the past, and it’s a struggle that motivates the horrors enacted by two men when they decide to strike out on their own and open a butcher shop in the deceptively simple and wickedly funny The Green Butchers, which likens cannibalism to all sorts of emotional disconnects.

The film begins with Svend (Mads Mikkelsen) hosting a barbecue for his friends, but things quickly go sour when a woman asks Bjarne (Nikolaj Lie Kaas) how many pigs he can slaughter in one day. It’s a ridiculous come-on line, but if Bjarne doesn’t take kindly to it that’s because it reminds him of the way he began to react to the world after the ghoulish death of his wife and parents in a car accident, which left his twin brother in a seven-year coma. Every one-liner in the film has a double meaning. Svend and Bjarne’s boss explains the mythology of the high-quality meat he sells: “Can you imagine anything worse than being stuck up your own ass?” And just as Holger (Ole Thestrup) cultivates meat by placing it inside the cavity of the very animals from which it came, Svend and Bjarne plow through the past via a series of grisly murders. Not only is everyone full of shit, they’re also knee-deep in it.

When Svend kills a man after accidentally locking him inside the freezer of his new butcher shop, he decides to soak slices of the man’s thigh in a special marinade and sell it to the locals as “chicky-wickies.” Soon everyone is lining up around the block and Svend must figure out a way to meet customer demand. “It’s barbecue season, it’s no time to break up,” pleads Svend to his girlfriend. The man is disturbingly connected to his work, but he is no less fallible than Bjarne, who inititally shuns Svend’s killing spree—Jensen brilliantly correlates the freezer in the film’s butcher shop to the machines that keep Bjarne’s twin brother alive at a local sanatoriam, in turn equating Svend’s deicison to kill people of questionable morals to Bjarne’s deicison to pull his brother off of life support for a hefty payday.

Jensen’s color palette is soaked in green—a symbol for Svend and Bjarne’s greed, their ever-diminishing humanity, and the past that haunts their every action. Svend desperately looks to his childhood, explaining to Bjarne how children used to beat him using pieces of wood and, most horrifying, a green bicycle pump. He sadly uses the horrors of the past to justify the horrors of the present, but fails to realize that his new line of work shouldn’t be used as a salve for his splintered, falsely empowered identity. That salve may as well be the man’s special marinade, which Jensen brilliantly uses to further confound Svend’s misguided notions of the way the world works, but not before resurrecting a seven-year-old corpse and similarly forcing Bjarne to redress the past rather than pretend it never existed at all.

The sausages really sizzle but they don’t look very appetizing: textures are soft and edge enhancement is visible during the film’s brightest sequences, suggesting a low-pass filter was used here. More problematic is the shimmering and aliasing visible on small objects, especially noticeable when the camera pans across the screen. This is all rather disappointing considering the vibrancy of the film’s cinematography.

The quote on the back of The Green Butchers DVD cover (“Deceptively simple and wickedly funny,” says Ed Gonzalez of Slant Magazine) proves that anyone can sound like Earl Dittman if they’re taken out of context.