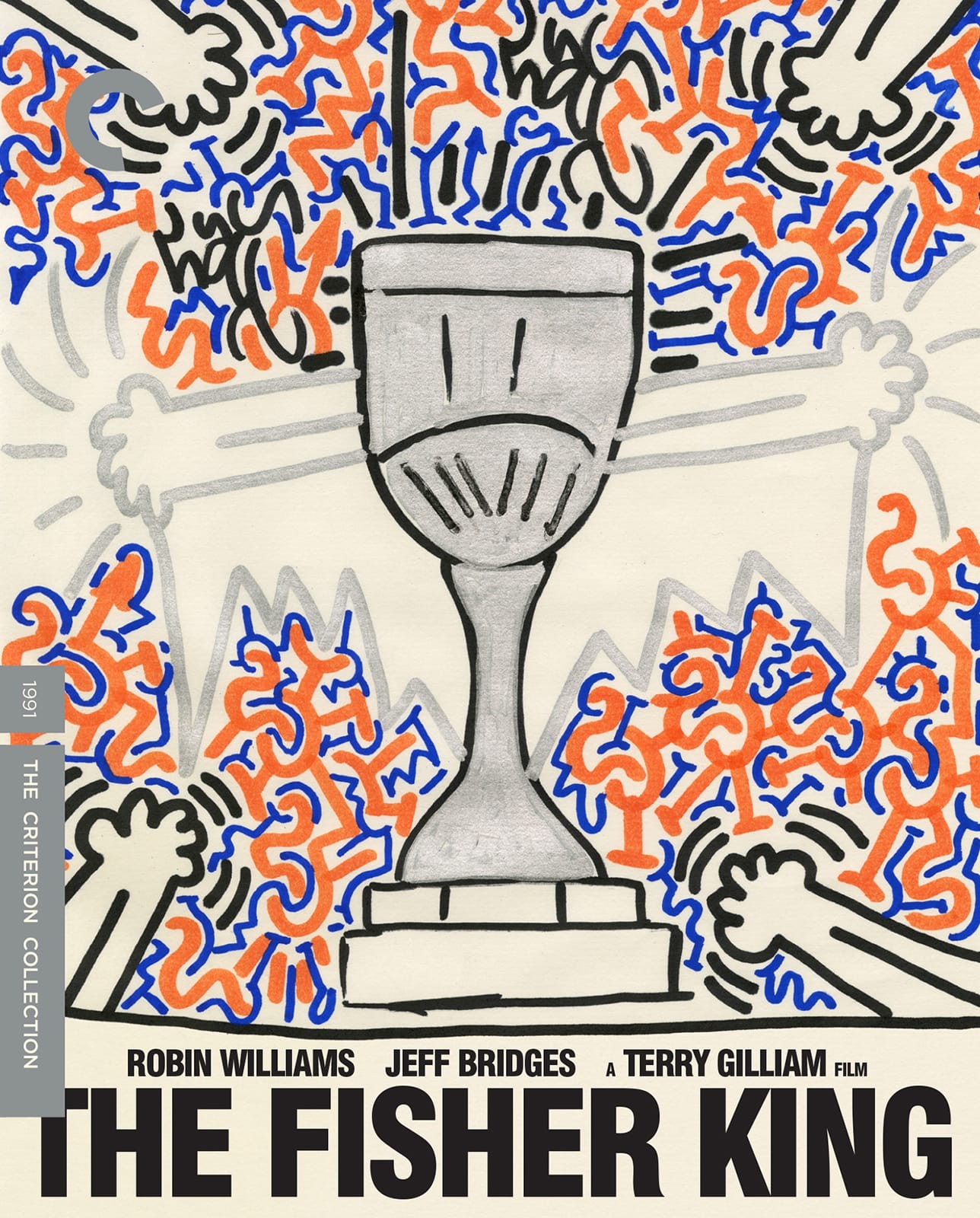 A film like The Fisher King represents prestige Hollywood at its best, but also its worst; it’s an ungainly 137-minute feature that wishes to be pre-knighted as a misunderstood cult classic rather than be perceived, in the least, as a neutered product of the system that cultivated it. Director Terry Gilliam ventures outside of his usual terrain here, directing a script by Richard LaGravenese for Tri-Star—a move that broke all of Gilliam’s filmmaking rules, specifically that he would never make a film that he didn’t write or for an American studio. It’s easy to see what attracted Gilliam to the script, given its medieval allegory and visually dynamic potential. Gilliam certainly capitalizes on the latter, though to rather obvious, ironic effect, framing Jack (Jeff Bridges) at high angles when he’s inflated by ego and success and low angles when he’s hit rock bottom. Jack’s a radio shock-DJ (shamelessly modeled off of Howard Stern) in Manhattan, whose career and psyche plummet after a random shooter murders half a dozen people following Jack’s on-air advice. Years later, Jack runs a shabby video store with his girlfriend, Anne (Mercedes Ruehl), and pawns off pornos with titles like Ordinary Peepholes to ceaselessly jabbering customers. Jack is indifferent, the film hammers, but he’s about to meet Parry (Robin Williams), a hobo on a quest for the Holy Grail, which he believes to reside in an Upper East Side apartment.

LaGravenese’s script offers buddy-movie tactics, not much more elevated than standard sitcom fare that subsists on odd-couple scenarios. The Fisher King follows such a comedic template, but LaGravenese’s wager is that by taking the undergirding premise and restaging it as an urban fairy tale, it becomes clever, not least because it consistently acknowledges its own absurdity. Gilliam is game for such a deliberately uneven and garbled blend, but his contribution only dynamizes the proceedings with hollow visual tactics, as if filmmaking were an equation, where canted angles plus dark themes plus reflexive humor equals “difficult” fare.

Surely that’s what Gilliam was vying for, especially with the video store’s mise-en-scène, where posters from Gilliam’s previous films decorate the walls. But what exactly is the gesture if not a wallowing in his own legend as an over-budget bad boy, who by his own creed reviles Hollywood productions, but nevertheless breaks the oath in order to take a gig? Were The Fisher King more of an art-house Trojan horse masquerading as Hollywood product, one could view the film as a political act. But LaGravenese’s script is as cloying as they come, too consumed with its own hybridity as a mix of the fantastic and sentimental to notice its numbing and innocuous ends.

By the same token, The Fisher King is the kind of film that Hollywood should consistently be looking to make; Gilliam and LaGravenese’s witch’s-brew approach is fascinating, and Hollywood filmmakers stand to benefit from experimenting with the bolder terms of their attempt. The film’s first third, in particular, looks and unfolds spectacularly, as Gilliam’s vision of a contemporary, bachelor-pad Xanadu reveals a kinky interest in attempting to make the image as monochromatic as possible without resorting to filters, while opting for the most extreme, wide-angle lenses available.

While these are certainly unusual elements to see in a studio film, they cannot be praised as anything more than aberrations, deliberate ploys by a savvy filmmaker who knows he can gain viewer purchase by luring the sniffing dogs (read: cineastes) with some camera-baiting meat. Gilliam is wonderful at it; he uses canted angles and camera moves as interestingly as any filmmaker within the past 30-plus years. Yet Gilliam’s penchant for wallowing in his proficiencies can’t be overstated; The Fisher King acts, especially in its cutesy approach to romance, like its unironic ending is somehow a defiant reversal of its previously self-aware, aggrandizing interests. Gilliam makes films as private gatherings for the initiated, who fancy the director’s fabulist worlds above all else; with The Fisher King, he revealed himself as a thoroughly apolitical filmmaker, like an activist given a bigger stage that spends his entire speech winking at and preaching to the choir.

The Criterion Collection’s Blu-ray graces The Fisher King with a 2K transfer that wonderfully highlights Terry Gilliam’s angular vision, most notably in the opening scenes inside Jack’s recording studio and apartment, making one shudder at the notion of ever having previously watched the film on pan-and-scan VHS. Colors, depth, and clarity fare especially well, with only a slight softness noticeable in various frames. Saturation and grain are also strong, as is image detail, right down to the smudges of dirt on Parry’s face. Sound is even stronger, as George Fenton’s score and the pop soundtrack are both mixed to favor music over dialogue, though one never overpowers the other when they coincide. There are no noticeable pops or cracks throughout. An English subtitle track is included.

Criterion continues to treat its American releases as cult fare, littering this disc with testimonies from cast and crew, but offering little perspective from anyone outside the production, aside from an essay by Bilge Ebiri that fluidly explains the film’s narrative and themes. An audio commentary by Gilliam, recorded in 1991, explains his orientation to the material as an outsider, both creatively and by birthright. More importantly, the director appears in a new series of interviews that thoroughly contextualizes the film’s stages of pre- and post-production, though light on explication of the film’s critical reception. Topics range from Jeff Bridges’s hair to improvised dialogue, but the best information comes via producer Lynda Obst, who explains how difficult it was to get the studio behind not only the script, but also Gilliam as director, given his previous financial failings with The Adventures of Baron Munchausen. An interview with the late Robin Williams from 2006 is insightful but typical of the actor, as he runs the gamut of voices and imitations while detailing his on-set interactions with cast and crew. An interview with the film’s visual artists is for hardcore fans only, as is a video essay featuring Bridges’s on-set photos. A series of minor extras round out the disc, including deleted scenes, costume tests, trailers, and brief footage of Bridges training with acting coach Stephen Bridgewater.

Much like Gilliam’s film, Criterion’s Blu-ray for The Fisher King packs an audio/visual wallop, but is undermined by its transparent interest in communal naval-gazing.

Blu-ray Review: Bernhard Wicki’s The Bridge on the Criterion Collection