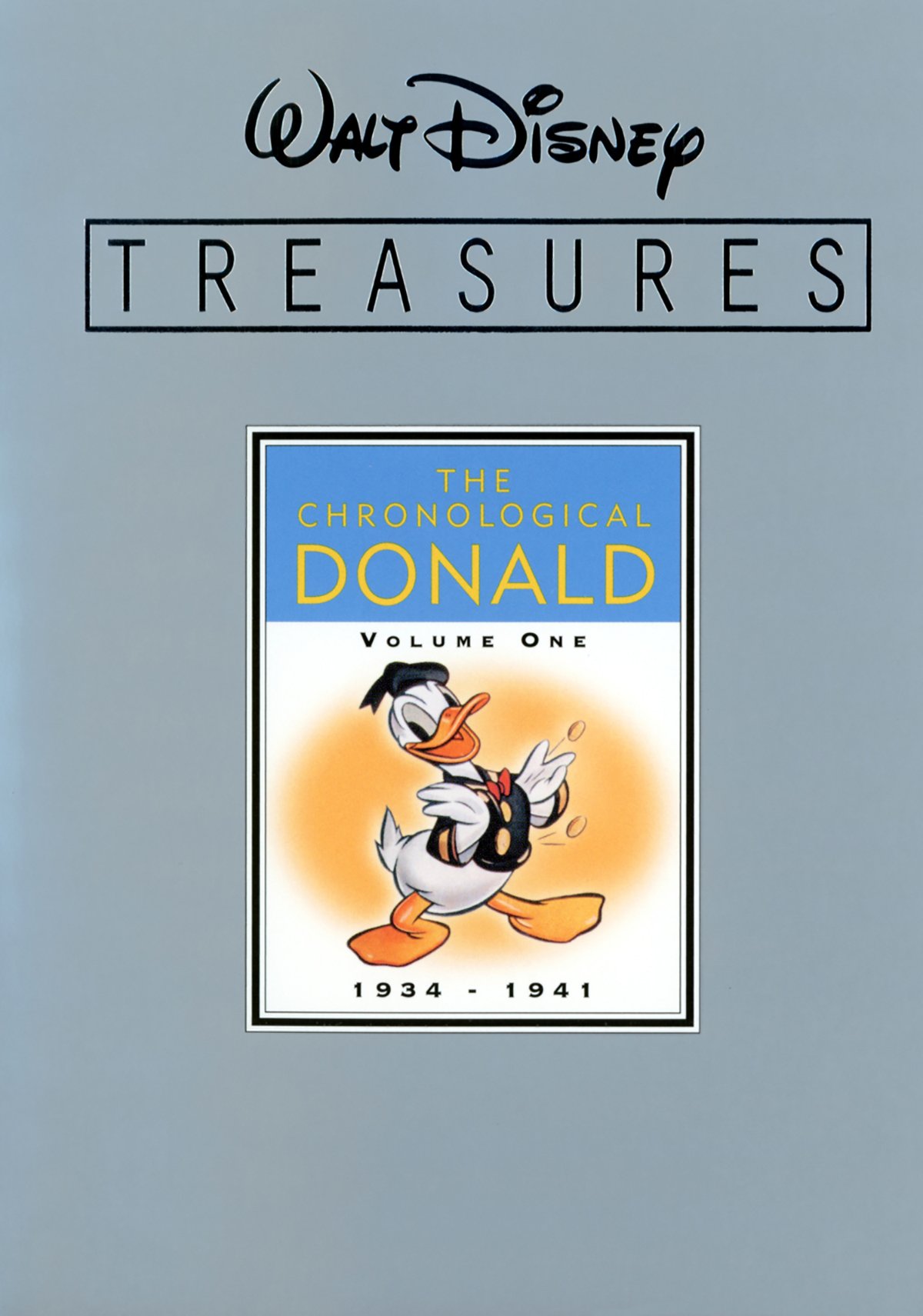 Walt Disney’s The Chronological Donald covers almost the first full decade of Disney’s Donald Duck cartoons, but the fact that all but five of the 36 shorts come from the last four years of that period testifies to Uncle Malt’s assertion that audiences clearly took to the irascible, crusty hothead far more enthusiastically than they did the studio’s original superstar, the ineffectually upright Mickey. By the early 1940s, Donald had so eclipsed the Mouse in the public’s heart that it was no surprise that the studio put him in the Everyman role as “America’s soldier” in their spate of WWII-themed shorts. Well, it was a tad surprising, given that Donald is almost totally defined by his lack of moral turpitude and his hair-trigger temper tantrums. One of the set’s earliest features, 1937’s “Don Donald” (directed by Fantasia’s Ben Sharpsteen), captures Donald’s violent appeal in a bubbly slapstick roundelay that, truth be told, is as riotously kinetic and indulges in the same brand of abusive charm that would turn Chuck Jones and Frank Tashlin into auteurist favorites (one gets the sense they literally took their cue from the most uncontained of these shorts). Somewhere along the America-Mexico border, Donald rides his midget burro into a tiny ghost town and makes an attempt to impress a sassy señorita pato by letting her have a ride on the donkey, who promptly kicks her ass 10 ways to Laredo. Donald’s understandable gales of laughter touch off a battle of wills—he in turn tries to win her back with his shiny new ride that turns out to be a flatulent jalopy. In addition to having hysterically jack-hammered animation mirror the two sparring lovers’ quick tempers, this is one of the only Donald shorts where his female partner (she might look like Daisy, but her stridency is in stark and welcome opposition to the “Minnie-fication” she’d soon undergo) was voiced by the same man who gave Donald his distinctive vocal cords, the venerable Clarence Nash. Nash wasn’t afraid to let his honking cheek raspberries (hey, you try to come up with a terse description of Donald’s voice!) sink into total inscrutability as his character lost his self-control, and they were the perfect match for a character who, unlike Mickey, indulged in all the illicit temptations that life had to offer. Hell, even introducing Donald to his three nephews, a move that could’ve put a deadly softened edge to the ballistic bird, only seemed to result in more mayhem. With apologies to R.S. Gwynn, if Mickey had a soul of Snow White integrity, then Donald was all seven deadly sins rolled up into one volatile package.

The video transfer is basically of the same quality as in the companion Mickey Mouse tins, though the shorts are a few years older. Some of the prints, especially the earliest, seem to be a tad worn. The right side of the frame has an occasionally blotchy effect, but not to a distracting degree. The colors are as candied as the Mickey sets, and Donald’s blue sailor top jumps off the screen. The sound is also wonderful, preserving every droplet of spittle in Nash’s overworked cheek pocket.

Now this is where the comparisons to previous Disney tins stop. Held against the cornucopia of special features that peppered the other releases, The Chronological Donald is almost featureless. There’s a nice but far too brief look at the career of Clarence Nash that runs for only five minutes. Beyond that, there are the galleries and a pair of Easter eggs (that, strangely, appear exactly the same on both discs), one showing Donald in a cameo appearance in a live-action feature and the other a PSA-ish spot showing a disturbingly earnest Donald going door to door asking for donations for the poor and out-of-work. Finally, there are more introductions from Uncle Malt (a.k.a. Leonard Maltin), who is predictably in full-tilt damage control mode, what with Donald’s frequent gun-wielding, whip-cracking, burro-beating rants.

The only non-villainous character the Disney image-conscious gatekeepers ever allowed to have recognizably human flaws, Donald Duck gets a two-disc set all to himself. Exactly as he’d have it.